Social Stock Exchange Crowdfunding campaign. Improve the world, today. THE VOID Blog. Big Data and Genetic Sequencing Will Help Extend the Human Lifespan. Two of the leading scientists at the edge of the medical revolution believe that our life expectancy could start creeping up toward the triple digits. 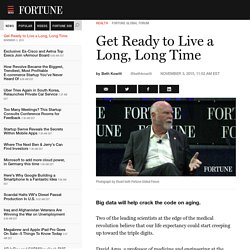 David Agus, a professor of medicine and engineering at the University of Southern California, said at the Fortune Global Forum on Monday that he believes that with our current technology humans have the potential to regularly live into their ninth or tenth decade. Craig Venter, co-founder and CEO of Human Longevity Inc., said there might be no hypothetical limit to how long we can live, but that “we need to make sure we can support extra long life on this planet.” Huge advancements at the intersection of medicine and technology, such as big data, are making these kinds of developments in aging possible. Venter explained that when he first sequenced the human genome 15 years ago, there was nothing for him to compare it to. For example, we now know that we vary about 3% from the 6.4 billion letters of DNA that we get from our parents. 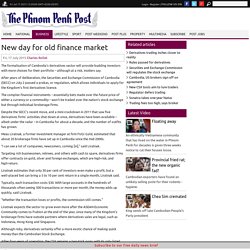 After years of deliberation, the Securities and Exchange Commission of Cambodia (SECC) on July 2 passed a prakas, or regulation, which allows individuals to apply for the Kingdom’s first derivatives licence. The complex financial instruments – essentially bets made over the future price of either a currency or a commodity – won’t be traded over the nation’s stock exchange but through individual brokerage firms.

Despite the SECC’s recent move, and a mini-crackdown in 2011 that saw five derivatives firms’ activities shut down at once, derivatives have been available – albeit under the radar – in Cambodia for about a decade, and the number of outfits has grown. Meas Liratnak, a former investment manager at firm FUGI Gold, estimated that about 20 brokerage firms have set up in Cambodia since the mid-2000s. UN Reform. UN reform is endlessly discussed, but there is sharp disagreement on what kind of reform is needed and for what purpose. 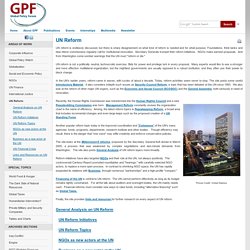 Foundations, think tanks and blue ribbon commissions regularly call for institutional renovation. Secretary Generals trumpet their reform initiatives. NGOs make earnest proposals. And from Washington come somber warnings that the UN must "reform or die. " UN reform is not a politically neutral, technocratic exercise. Another popular reform topic today is the improved coordination and "Coherence" of the UN's many agencies, funds, programs, departments, research institute and other bodies. The site looks at the Millennium+5 reforms, proposed by the Secretary General Kofi Annan in March 2005, a process that was weakened by complex negotiations and last-minute demands from Washington.

UN Finance. The United Nations and all its agencies and funds spend about $30 billion each year, or about $4 for each of the world's inhabitants. 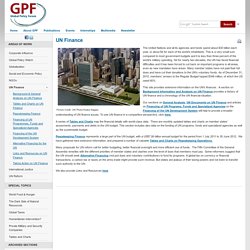 This is a very small sum compared to most government budgets and it is less than three percent of the world's military spending. Yet for nearly two decades, the UN has faced financial difficulties and it has been forced to cut back on important programs in all areas, even as new mandates have arisen. Many member states have not paid their full dues and have cut their donations to the UN's voluntary funds.

As of December 31, 2010, members' arrears to the Regular Budget topped $348 million, of which the US owed 80%. This site provides extensive information on the UN's finances. Our sections on General Analysis, UN Documents on UN Finance and articles on Financing of UN Programs, Funds and Specialized Agencies on the Financing of the UN Development System will help to provide a broader understanding of UN finance issues. The Future of Global Development. #YouthWill: A campaign wrap up. Nowhere is there more potential for change than in the minds and hearts of young people around the world. 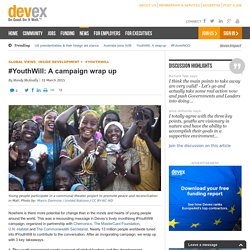 This was a resounding message in Devex’s lively monthlong #YouthWill campaign, organized in partnership with Chemonics, The MasterCard Foundation, U.N. -Habitat and The Commonwealth Secretariat. Nearly 13 million people worldwide tuned into #YouthWill to contribute to the conversation. After an invigorating campaign, we wrap up with 3 key takeaways. 1. Houston Business Coach - The Growth Coach. International Program.