The sting in the trade deal tail: corporations push for rights to sue governments. Already embedded in many trade agreements, over the past few decades, ISDS has developed into a cash cow for corporations, granting them multi-million dollar awards and settlements in compensation for governments regulating in the public interest. 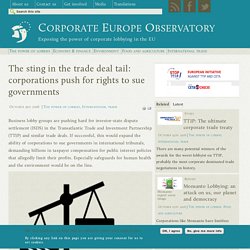 Take the case of Argentina which has been ordered to pay a total of US$900 million in compensation for measures it took to fight its 2001-2002 financial crisis. ISDS is also a powerful tool for big business to delay, weaken, or prevent legislation that could affect its profits. Togo, for example, has held back anti-smoking measures out of fear of expensive investor claims by big Tobacco (such as Philip Morris’ lawsuits against Uruguay and Australia over cigarette packaging regulations).

Concerted action against the public good The ESF’s commitment to promote investor-state arbitration in ongoing trade agreement negotiations has not sprung out of nowhere. No concessions in new trade deals Let’s “reward” them! Architect of EU Refugee Disaster Links TPP-TTIP “Trade” Treaties. Global Business Dialogue, a coalition of corporate globalists promoting world government through so-called free trade agreements, sent an e-mail to its members on March 21 praising a speech by Cecilia Malmstrom, a key architect of the disastrous migrant/refugee program that is devastating her native Sweden and all of Europe. 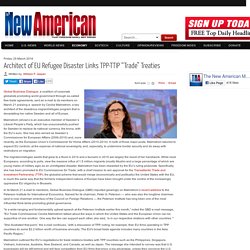 Malmstrom (shown) is an executive member of Sweden’s Liberal People’s Party, which has unsuccessfully pushed for Sweden to replace its national currency, the krona, with the EU’s euro. She has also served as Sweden’s Commissioner for European Affairs (2006-2010) and, more recently, as the European Union’s Commissioner for Home Affairs (2010-2014). In both of those major posts, Malmstrom labored to expand EU controls, at the expense of national sovereignty, and, especially, to undermine border security and do away with restrictions on migration. The migration/refugee swells that grew to a flood in 2014 and a tsunami in 2015 are largely the result of her handiwork. Australia faces $50m legal bill in cigarette plain packaging fight with Philip Morris. Australia's plain packaging laws have become a major test case for global tobacco companies in their fight against restrictions on sale of cigarettes. 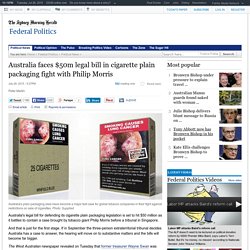 Photo: Supplied Australia's legal bill for defending its cigarette plain packaging legislation is set to hit $50 million as it battles to contain a case brought by tobacco giant Philip Morris before a tribunal in Singapore. And that is just for the first stage. If in September the three-person extraterritorial tribunal decides Australia has a case to answer, the hearing will move on to substantive matters and the bills will become far bigger. The West Australian newspaper revealed on Tuesday that former treasurer Wayne Swan was called to Singapore in February to give evidence for Australia in a secret hearing. Among the witnesses called by Philip Morris has been former High Court judge Ian Callinan, who was quizzed about administrative law. Australia has succeeded in getting the case split into two. The talks continue until Friday. How TTIP undermines food safety and animal welfare. TTIP is an affront to democracy. Prime minister David Cameron loves to portray himself as the defender of British sovereignty in his dealings with the EU. 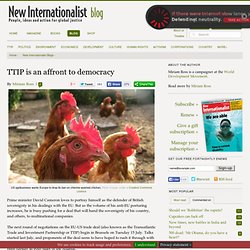 But as the volume of his anti-EU posturing increases, he is busy pushing for a deal that will hand the sovereignty of his country, and others, to multinational companies. The next round of negotiations on the EU-US trade deal (also known as the Transatlantic Trade and Investment Partnership or TTIP) begin in Brussels on Tuesday 15 July. Talks started last July, and proponents of the deal seem to have hoped to rush it through with as little scrutiny as possible. They have been disappointed, as opposition to the deal has risen rapidly in both sides of the Atlantic. In the US, trade unions and Democrat congressmen and women have prevented President Obama from fast-tracking the deal. On Saturday 12 July, towns and cities across Britain will see health campaigners, environmentalists, anti-poverty groups and trade unionists protesting under ‘No TTIP’ banners. 'Trojan Horse' Warns of Corporate-Friendly Trade Deal's Impending Dangers. 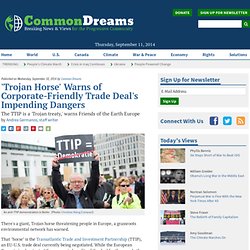 That "horse" is the Transatlantic Trade and Investment Partnership (TTIP), an EU-U.S. trade deal currently being negotiated. While the European Commission has touted the economic benefits of the deal for those on both sides of the Atlantic, Friends of the Earth Europe says TTIP could put the continent's food safety at risk, enable more dirty energy and foster corporate power. To highlight these risks, FOE Europe launched on Tuesday its Trojan Treaty tour, which includes a 26-foot tall "Trojan horse. " The horse will be in Copenhagen until Thursday, and will make other stops in the coming months, including locations in Germany, Belgium, Spain and Estonia.

FOE is among several groups that has sought to call out potential dangers of the deal — what is known so far is based on leaked documents.