U.S. Army prepares to invade U.S. Even Left-Wing Gawker Finds Jade Helm Exercise “Unsettling” Media characterizes concern about military drill as “right-wing paranoia” Paul Joseph Watson Prison Planet.com March 26, 2015 Despite attempts by the mainstream media to characterize concern about the upcoming Jade Helm military exercise as “right wing paranoia,” even left-wing Gawker acknowledges that the drill is “unsettling” and that the logo for the exercise stirs an air of “creeping fascism”. 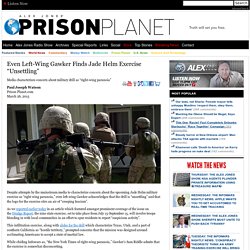 As we reported earlier today in an article which featured amongst prominent coverage of the issue on the Drudge Report, the nine state exercise, set to take place from July 15-September 15, will involve troops blending in with local communities in an effort to spur residents to report “suspicious activity”. This infiltration exercise, along with slides for the drill which characterize Texas, Utah, and a part of southern California as “hostile territory,” prompted concerns that the mission was designed around acclimating Americans to accept a state of martial law. 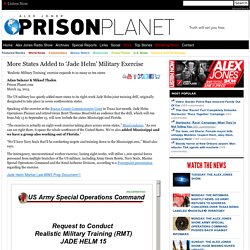 Speaking of the exercise at the Brazos County Commissioners Court in Texas last month, Jade Helm Operations Planner and retired Green Beret Thomas Mead told an audience that the drill, which will run from July 15 to September 15, will now include the states Mississippi and Florida. “The exercise is actually an eight-week exercise taking place across seven states,” Mead explains. “As you can see right there, it spans the whole southwest of the United States. 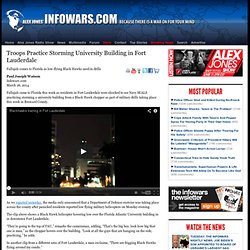 As we reported yesterday, the media only announced that a Department of Defense exercise was taking place across the county after panicked residents reported low flying military helicopters on Monday evening. The clip above shows a Black Hawk helicopter hovering low over the Florida Atlantic University building in in downtown Fort Lauderdale. “They’re going to the top of FAU,” remarks the cameraman, adding, “That’s the big boy, look how big that one is man,” as the chopper hovers over the building. In another clip from a different area of Fort Lauderdale, a man exclaims, “There are frigging Black Hawks flying around my condo.” 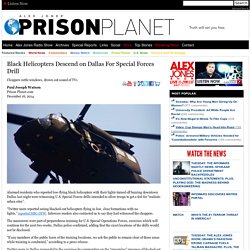 Special Forces drills intended to allow troops to get a feel for “realistic urban sites”. “Twitter users reported seeing blacked-out helicopters flying in low, close formations with no lights,” reported NBC-DFW. Infowars readers also contacted us to say they had witnessed the choppers. The maneuvers were part of preparedness training for U.S. “If any members of the public learn of the training locations, we ask the public to remain clear of these areas while training is conducted,” according to a press release. Twitter users in Dallas responded to the exercises by commenting on the “unnerving” presence of blacked out helicopters that shook windows and drowned out the sound of televisions. Facebook @ FOLLOW Paul Joseph Watson @ Print this page.