Population Research Institute. Possibly tainted vaccine may be tip of the iceberg Philippine women may have been unwittingly vaccinated against their own children, a recent study conducted by the Philippine Medical Association (PMA) has indicated.1 The study tested random samples of a tetanus vaccine for the presence of human chorionic gonadotropin (hCG), a hormone essential to the establishment and maintenance of pregnancy. 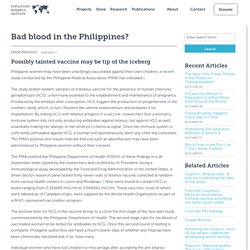 Produced by the embryo after conception, hCG triggers the production of progesterone in the mothers' body which, in turn, thickens the uterine endometrium and prepares it for implantation. By linking hCG with tetanus antigens in a vaccine, researchers fool a woman's immune system into not only producing antibodies against tetanus, but against hCG as well, essentially making her allergic to her embryo's chemical signal. Once her immune system is sufficiently stimulated against hCG, a woman will spontaneously abort any child she conceives. ‘Breeder’s licence’ a path to poorer society. †Introductory offers to be billed 4 weekly as per the following - The Australian Digital Subscription $3 per week, $12 billed 4 weekly; The Australian Digital Subscription + weekend paper delivery $3 per week, $12 billed 4 weekly; The Australian Digital Subscription + 6 day paper delivery $6 per week, $24 billed 4 weekly. 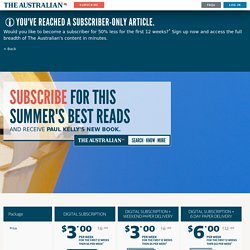 Full offer terms and conditions apply - see www.theaustralian.com.au for full details. Women are having fewer kids, and demographers don't know why. U.S. fertility is not recovering from the financial crisis — and demographers aren’t sure why. 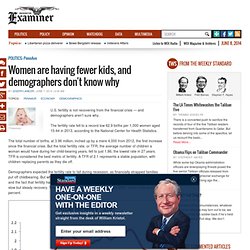 The fertility rate fell to a record low 62.9 births per 1,000 women aged 15-44 in 2013, according to the National Center for Health Statistics. The total number of births, at 3.96 million, inched up by a mere 4,000 from 2012, the first increase since the financial crisis. But the total fertility rate, or TFR, the average number of children a woman would have during her child-bearing years, fell to just 1.86, the lowest rate in 27 years. TFR is considered the best metric of fertility. A TFR of 2.1 represents a stable population, with children replacing parents as they die off.

Demographers expected the fertility rate to fall during recession, as financially strapped families put off childbearing. Johnson noted that the excess of births over deaths is now the lowest it has been in 35 years. One foreseen factor behind the dropoff in childbearing is the rapid decline in Hispanic-American fertility. Nobody is better at being human, Professor Dawkins, least of all you. Richard Dawkins has long flirted with eugenics. 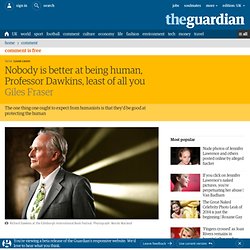 “If you can breed cattle for milk yield, horses for running speed, and dogs for herding skill, why on Earth should it be impossible to breed humans for mathematical, musical or athletic ability?” He asked back in 2006. “I wonder whether, some 60 years after Hitler’s death, we might at least venture to ask what the moral difference is between breeding for musical ability and forcing a child to take music lessons.” What Dawkins proposes is that there is a big moral difference between negative and positive eugenics. As he explains it, negative eugenics is all about breeding bad things out – for example, certain hereditary diseases – and positive eugenics is all about breeding apparently good things in, such as athletic prowess or blond hair and blue eyes.

Last week, Professor Dawkins was at it again, this time on Twitter. To be absolutely clear: Down’s syndrome is not hereditary. Bill Gates funds birth control microchip that lasts 16 years inside the body and can be turned on or off with remote control. Helped along by one of the world’s most notable billionaires, a U.S. firm is developing a tiny implant that acts as a contraceptive for 16 years — and can be turned on or off using a remote control. 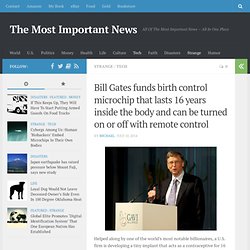 The birth control microchip, funded by the Bill and Melinda Gates Foundation, would hold nearly two decades worth of a hormone commonly used in contraceptives and dispense 30 micrograms a day, according to a report from the MIT Technology Review. The new birth control, which is set to begin preclinical testing next year with hopes of putting it on shelves in 2018, can be implanted in the buttocks, upper arm or abdomen. During Mr. Gates’s tour of an MIT lab in 2012, he spoke with Professor Robert Langer about the possibility of a new birth control that could be activated and deactivated over a long period of time — sparing women a trip to the clinic to remove their contraceptive implant whenever they plan to get pregnant, the Technology Review reported. (Read the rest of the story here…) Bill Gates Creates "Remote Control Birth Control Implant"

Bill Gates funds technology to destroy your sperm. Ethan A. 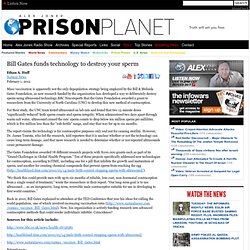 HuffNatural News February 1, 2012 Mass vaccination is apparently not the only depopulation strategy being employed by the Bill & Melinda Gates Foundation, as new research funded by the organization has developed a way to deliberately destroy sperm using ultrasound technology.BBC Newsreports that the Gates Foundation awarded a grant to researchers from the University of North Carolina (UNC) to develop this new method of contraception. For their study, the UNC team tested ultrasound on lab rats and found that two 15-minute doses “significantly reduced” both sperm counts and sperm integrity. When administered two days apart through warm salt water, ultrasound caused the rats’ sperm counts to drop below ten million sperm per milliliter, which is five million less than the “sub-fertile” range, and stay that way for up to six months.

The report claims the technology is for contraceptive purposes only and not for causing sterility. Sources for this article include: Print this page. Are We Sterilizing Female Prisoners Based on Economics, Sexism, or Racism? Written by Lisa Cerda 01 Jun 2014 Today I learned that California prison doctors were sterilizing female prisons in order to reduce future welfare recipients. 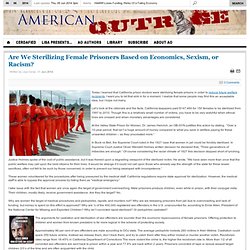 I want you to let that sink in for a moment. I realize that some people may find this an acceptable idea, but I hope not many. Let’s look at the rationale and the facts. At the Valley State Prison for Women, Dr. In Buck vs Bell, the Supreme Court ruled in the 1927 case that women in jail could be forcibly sterilized. Justice Holmes spoke of the cost of public assistance, but it was framed upon a degrading viewpoint of the sterilized victim. These women volunteered for the procedures after being pressured by the medical staff. I take issue with the fact that women are once again the target of government overreaching. Why are women the target of medical procedures and pedophiles, rapists, and murders not? The arguments for castration and sterilization of sex offenders are sounder than the ecomonic repercussions of female prisoners. 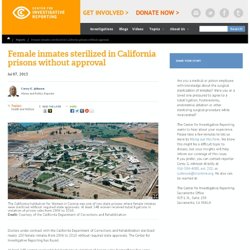 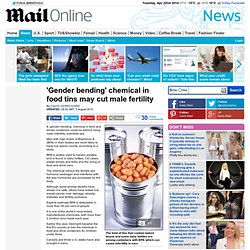 Men with high levels of Bisphenol A (BPA) in their bodies are more likely to have low sperm counts, according to a study. BPA is widely used to harden plastics and is found in baby bottles, CD cases, plastic knives and forks and the lining of food and drink cans. The chemical mimics the female sex hormone oestrogen and interferes with the way hormones are processed by the body. Although some animal studies have shown it is safe, others have linked it to breast cancer, liver damage, obesity, diabetes and fertility problems. Experts estimate BPA is detectable in more than 90 per cent of people. It is one of the world’s most widely manufactured chemicals, with more than 2.2million tons made each year. What Should Be Done To A Country That Kills 56 Million Of Its Own People? Do you know how many babies have been murdered in America since 1973? 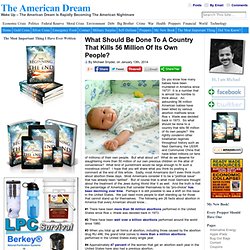 It is a number that is almost too horrible to think about. An astounding 56 million American babies have been killed by various abortion methods since Roe v. Wade was decided back in 1973. So what should be done to a country that kills 56 million of its own people? We rightly condemn other totalitarian regimes throughout history such as Nazi Germany, the USSR and Communist China that have killed millions (or tens of millions) of their own people.

. #1 There have been more than 56 million abortions performed in the United States since Roe v. . #2 There have been well over a billion abortions performed around the world since 1980. Forced Sterilizations in India. By Wendy Wright | London, England | LifeNews.com | 5/10/12 5:12 PM London, England (CFAM/LifeNews) — The British government gave $268 million to the government of India for a program that forcibly sterilizes poor women and men, according to the Guardian newspaper. This news comes as the Bill & Melinda Gates Foundation prepares to co-host a family planning summit with the British government in London this July. Melinda Gates recently dismissed the link between contraception programs and population control in a speech launching her new initiative. Titled “No Controversy,” her campaign intends to “change the global conversation around family planning” by discounting its association with abortion, coercion and immorality, and focusing on universal access.

Around the same time, India’s supreme court heard evidence of coercive mass sterilizations in filthy conditions. Men and women are rounded up into makeshift rural camps to be sterilized, many left in pain with little or no care.