Rule from the Shadows - The Psychology of Power - Part 1. Narrative Networks. “Manufacturing Dissent”: The Anti-globalization Movement is Funded by the Corporate Elites. This article was first published in 2010. 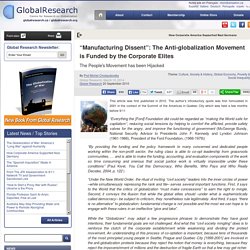 Operation Mockingbird: CIA Media Manipulation. Meet the 77th Battalion – The British Army is Mobilizing 1,500 “Facebook Warriors” to Spread Disinformation. The British Army will revive one of the most contentious special forces units of the second world war, the Chindits, as a new generation of “Facebook” warriors who will wage complex and covert information and subversion campaigns. – From the recent FT article: Army Revives Chindits as ‘Facebook Warriors’ for Smart Battle Get ready, social media is about to get far more treacherous than it already is. 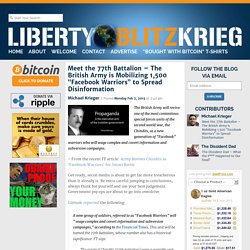 Be extra careful jumping to conclusions, always think for yourself and use your best judgement. Government psy ops are about to go into overdrive. 1975 Video: CIA Admits to Congress the Agency Uses Mainstream Media to Distribute Disinfo. Krauthammer: Obama’s Order Makes ‘Chumps’ Of Legal Immigrants. » Pentagon and CIA Want to Keep ISIS Tweeting Alex Jones' Infowars: There's a war on for your mind! Cracking The “Conspiracy Theories’” Psycholinguistic Code: The Witch Hunt against Independent Research and Analysis. A new crusade appears to be underway to target independent research and analysis available via alternative news media. 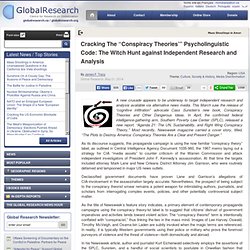 Kennedy’s assassination. It’s true. Operation Mockingbird: CIA Media Manipulation. State Of Mind: The Psychology Of Control. NSA Blows Its Own Top Secret Program in Order to Propagandize. Over the last 40 years, the U.S. government has relied on extreme fear-mongering to demonize transparency. 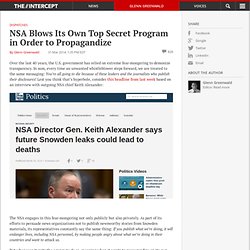 In sum, every time an unwanted whistleblower steps forward, we are treated to the same messaging: You’re all going to die because of these leakers and the journalists who publish their disclosures! Lest you think that’s hyperbole, consider this headline from last week based on an interview with outgoing NSA chief Keith Alexander: The NSA engages in this fear-mongering not only publicly but also privately. As part of its efforts to persuade news organizations not to publish newsworthy stories from Snowden materials, its representatives constantly say the same thing: If you publish what we’re doing, it will endanger lives, including NSA personnel, by making people angry about what we’re doing in their countries and want to attack us. FT. US military studied how to influence Twitter users in Darpa-funded research. The activities of users of Twitter and other social media services were recorded and analysed as part of a major project funded by the US military, in a program that covers ground similar to Facebook’s controversial experiment into how to control emotions by manipulating news feeds. 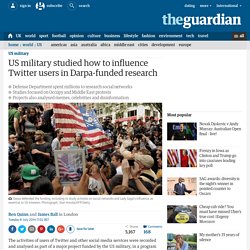 Research funded directly or indirectly by the US Department of Defense’s military research department, known as Darpa, has involved users of some of the internet’s largest destinations, including Facebook, Twitter, Pinterest and Kickstarter, for studies of social connections and how messages spread. While some elements of the multi-million dollar project might raise a wry smile – research has included analysis of the tweets of celebrities such as Lady Gaga and Justin Bieber, in an attempt to understand influence on Twitter – others have resulted in the buildup of massive datasets of tweets and additional types social media posts. Other studies looked further afield.