"...a government that needs to guard itself from its people is a government without legitimacy."

Today Americans would be outraged if U.N. troops entered Los Angeles to restore order; tomorrow they will be grateful!

This is especially true if they were told there was an outside threat from beyond whether real or promulgated, that threatened our very existence. It is then that all peoples of the world will pledge with world leaders to deliver them from this evil. The one thing every man fears is the unknown. When presented with this scenario, individual rights will be willingly relinquished for the guarantee of their well being granted to them by their world government.”

– Henry Kissinger in an address to the Bilderbergers at Evian, France, May 21, 1992.

“The outlook for civil liberties grows bleaker by the day, from the government’s embrace of indefinite detention for US citizens and armed surveillance drones flying overhead to warrantless surveillance of phone, email and Internet communications, and prosecutions of government whistle-blowers. The homeland is ruled by a police-industrial complex, an extension of the American military empire. Everything that our founding fathers warned against is now the new norm. The government has trained its sights on the American people. 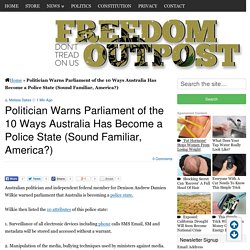 New Report from Princeton and Northwestern Proves It: The U.S. is an Oligarchy. Despite the seemingly strong empirical support in previous studies for theories of majoritarian democracy, our analyses suggest that majorities of the American public actually have little influence over the policies our government adopts. 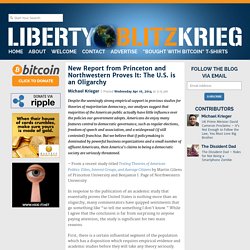 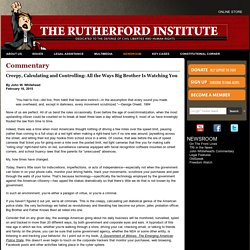 AMERICA WILL COLLAPSE BY 2016. France Deploys 10,000 Troops in Wake of Charlie Hebdo Attack. The Police State Is Upon Us. Paul Craig RobertsPrison Planet.com January 31, 2015 Anyone paying attention knows that 9/11 has been used to create a police/warfare state. 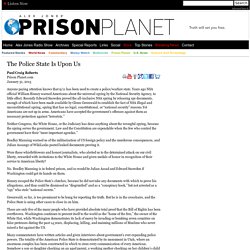 Years ago NSA official William Binney warned Americans about the universal spying by the National Security Agency, to little effect. Recently Edward Snowden proved the all-inclusive NSA spying by releasing spy documents, enough of which have been made available by Glenn Greenwald to establish the fact of NSA illegal and unconstitutional spying, spying that has no legal, constitutional, or “national security” reasons.Yet Americans are not up in arms. Americans have accepted the government’s offenses against them as necessary protection against “terrorists.” Neither Congress, the White House, or the Judiciary has done anything about the wrongful spying, because the spying serves the government. NYPD Launches Plan to Deal with Protests – Arm Police with Long Rifles, Machines Guns and Extra Protective Gear. Murders reached a historic low in NYC for 2014; overall crime was down across the board by nearly 5%; hell, even the holiday slowdown didn’t really lead to any additional crime. 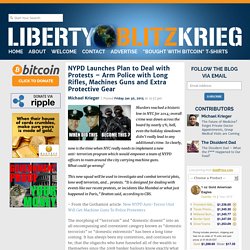 » Feds to Unleash Hyper-Orwellian Police State at Super Bowl XLIX Alex Jones' Infowars: There's a war on for your mind! FBI Report Accidentally Exposes the Severity of the Police State. A recently published FBI report accidentally proves that while the police claim cops face growing threats from rowdy populations like in Ferguson–the opposite is true. 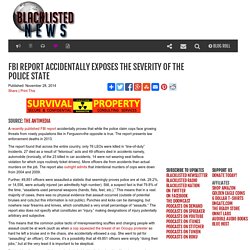 The report presents law enforcement deaths in 2013. Armored vehicle helps collect civil judgment in small town. When officials in the tiny Town of Stettin in Marathon County went to collect a civil judgment from 75-year-old Roger Hoeppner this month, they sent 24 armed officers. 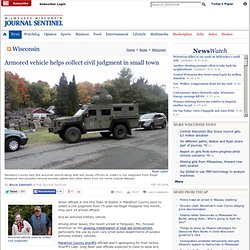 And an armored military vehicle. Among other issues, the recent unrest in Ferguson, Mo., focused attention on the growing militarization of local law enforcement, particularly the use by even very small police departments of surplus armored military vehicles. America is Falling Apart - #NewWorldNextWeek. Globalist Mouthpiece Calls For The Entire Planet To Adopt The ‘National Identification System’ One European Country Has Established. Michael SnyderAmerican Dream July 17, 2014 Would you like to have a digital identity card that is automatically issued to you at birth? 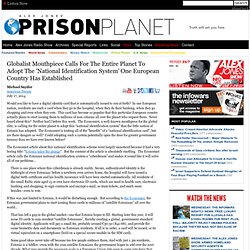 In one European nation, residents use such a card when they go to the hospital, when they do their banking, when they go shopping and even when they vote. This card has become so popular that this particular European country actually plans to start issuing them to millions of non-citizens all over the planet who request them. Conditioning.