HOW TO ANALYZE THE NEWS AND WHAT GOES ON AROUND YOU. World Affairs Brief, Copyright Joel Skousen. 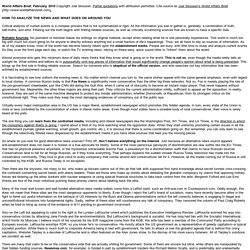 Partial quotations with attribution permitted. Cite source as Joel Skousen’s World Affairs Brief ( Critical analysis of current events is a complex process that is not systematized or rigid. All the information you see or gather is, generally, a combination of truth, half-truths, and error. Filtering out the truth begins with finding reliable sources, as well as critically scrutinizing sources that are known to have a specific bias. Reliable Sources: No journalist or historian bases his writings on original material, except when relating what he or she personally experiences. Almost everyone who gets this minimum dose of daily news thinks that they know what is going on in the world. It is fascinating to see how uniform the evening news is. Virtually every major metropolitan area in the has a major liberal, establishment newspaper which promotes this hidden agenda.

So where do you look for good alternative news sources? Do Americans Live In A False Reality Created By Orchestrated Events? Top German Journalist Admits Live On Air National News Agenda Set By Government. National public service broadcaster Zweites Deutsches Fernsehen (ZDF), which was recently forced into a humiliating apology for their silence on migrant violence and sex assault is being drawn into a fresh scandal after one of their former bureau chiefs admitted the company takes orders from the government on what it reports. 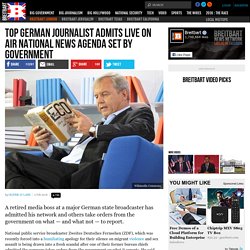 He said journalists received instructions to write news that would be “to Ms. Merkel’s liking”. Former head of ZDF Bonn Dr. Wolfgang Herles make the remarks during a radio event (from minute 27) in Berlin where journalists discussed the media landscape. Moving on to the freedom of the press, the panel chair asked Dr. “We have the problem that – now I’m mainly talking about the public [state] media – we have a closeness to the government. Worse than the mainstream, government controlled and poll-tax funded media in Germany just agreeing with the ruling coalition, the stations actually took orders on what was and was not to be reported on. Planned Parenthood warns news media - don't air undercover sting videos. Planned Parenthood of Minnesota, North Dakota and South Dakota warned news outlets today that airing undercover videos from the Center for Medical Progress could violate "patient privacy. 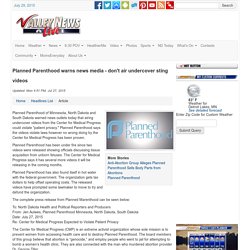 " Planned Parenthood says the videos violate laws however no wrong doing by the Center for Medical Progress has been proven. Planned Parenthood has been under fire since two videos were released showing officials discussing tissue acquisition from unborn fetuses. The Center for Medical Progress says it has several more videos it will be releasing in the coming months. Planned Parenthood has also found itself in hot water with the federal government. The organization gets tax dollars to help offset operating costs. The complete press release from Planned Marenthood can be seen below: To: North Dakota Health and Political Reporters and Producers From: Jen Aulwes, Planned Parenthood Minnesota, North Dakota, South DakotaDate: July 27, 2015Re: Center for Medical Progress Expected to Violate Patient Privacy. It’s Now Illegal In Illinois To Film Cops. Or any government officials, for that matter Steve Watson Prisonplanet.com December 10, 2014 An amendment to a Senate bill in Illinois has been overwhelmingly passed to ensure that recording police officers and government officials is now a felony. 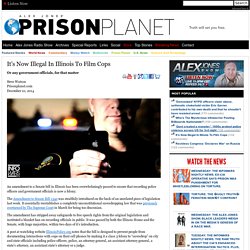 The Amendment to Senate Bill 1342 was stealthily introduced on the back of an unrelated piece of legislation last week. It essentially reestablishes a completely unconstitutional eavesdropping law that was previously overturned by The Supreme Court in March for being too draconian. The amendment has stripped away safeguards to free speech rights from the original legislation and instituted a blanket ban on recording officials in public. It was passed by both the Illinois House and the Senate, with huge majorities, within two days of it’s introduction.

Police Targeted Media With No-Fly Zone Over Ferguson, Tapes Show. WASHINGTON — The federal government agreed in August to a request by the police to restrict about 37 square miles of airspace over Ferguson, Mo., for 12 days for what they said were safety concerns, but audio recordings show that the local authorities privately acknowledged that the purpose was to keep away news helicopters during violent street protests. 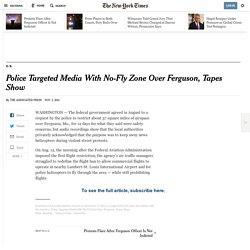 On Aug. 12, the morning after the Federal Aviation Administration imposed the first flight restriction, the agency’s air traffic managers struggled to redefine the flight ban to allow commercial flights to operate at nearby Lambert-St. Louis International Airport and for police helicopters to fly through the area — while still prohibiting flights. “They finally admitted it really was to keep the media out,” one administration manager said about the St. Louis County Police Department in a series of recorded telephone conversations obtained by The Associated Press. Continue reading the main story OPEN Graphic Mr. OPEN Interactive Graphic.