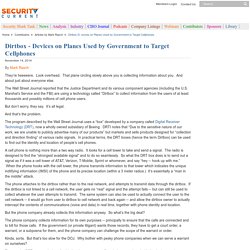 Look overhead. That plane circling slowly above you is collecting information about you. And about just about everyone else. The Wall Street Journal reported that the Justice Department and its various component agencies (including the U.S. But don’t worry, they say. And that’s the problem. The program described by the Wall Street Journal uses a “box” developed by a company called Digital Receiver Technology (DRT), now a wholly owned subsidiary of Boeing. Revealed: US Agency Using Spy Planes to Fool Cell Phones, Capture Data. According to new reporting by the Wall Street Journal, the U.S. 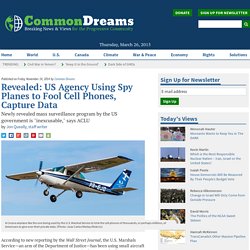 Marshals Service—an arm of the Department of Justice—has been using small aircraft equipped with technology that can mimic the functions of cell towers in order to capture the data contained on phones and mobile devices of people across large areas on the ground below. Citing those familiar with the program, the Journal report (subscription) reveals how the program's use of so-called "dirtbox" technology is part of "a high-tech hunt for criminal suspects that is snagging a large number of innocent Americans" in a dragnet approach that will remind some of similar techniques known to be used by the National Security Agency and other federal agencies.

The WSJ reporting relates how the Marshals Service operate a fleet of specially-outfitted Cessna airplanes which can take off from "at least five metro-area airports," allowing the aircraft a range that covers "most of the US population. " This is a huge deal. Fake phone masts installed across London to listen in on all mobile calls — RT UK. Published time: June 10, 2015 12:18 Reuters / Andrew Winning More than 20 fake phone masts have been tuning in to mobile phone conversations across the capital, with the police unable to confirm who is operating them. 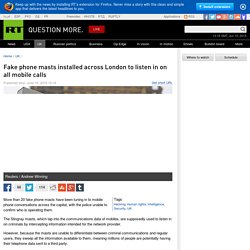 The Stingray masts, which tap into the communications data of mobiles, are supposedly used to listen in on criminals by intercepting information intended for the network provider. However, because the masts are unable to differentiate between criminal communications and regular users, they sweep all the information available to them, meaning millions of people are potentially having their telephone data sent to a third party. According to a Sky News investigation, there are more than 20 currently in use in London, but their origins remain unknown. Other police forces across the globe are known to use Stingray masts, which operate by tricking phones into thinking they are regular phone masts. Tech firm tries to pull back curtain on surveillance efforts in Washington. As a black sedan pulled into downtown Washington traffic earlier this week, a man in the back seat with a specially outfitted smartphone in each hand was watching for signs of surveillance in action. 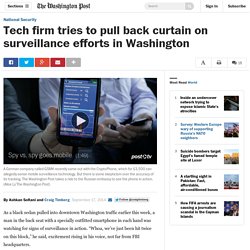 “Whoa, we’ve just been hit twice on this block,” he said, excitement rising in his voice, not far from FBI headquarters. Then as the car passed the Federal Trade Commission’s limestone edifice, “Okay, we just got probed.” Then again, just a few minutes later, as the car moved between the Supreme Court and the Capitol, he said, “That’s the beginning of an interception.” The man was Aaron Turner, chief executive of Integricell, a mobile security company. The specially outfitted smartphones, he said, are designed to act like high-tech divining rods that warn users of suspicious mobile activity, potentially indicating surveillance equipment used by police, intelligence agencies and others to track people and snoop on their calls.

How rife? Secrecy around police surveillance equipment proves a case’s undoing. TALLAHASSEE — The case against Tadrae McKenzie looked like an easy win for prosecutors. 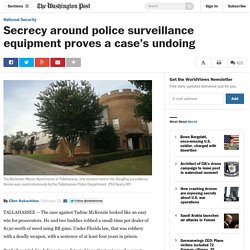 He and two buddies robbed a small-time pot dealer of $130 worth of weed using BB guns. Under Florida law, that was robbery with a deadly weapon, with a sentence of at least four years in prison. But before trial, his defense team detected investigators’ use of a secret surveillance tool, one that raises significant privacy concerns. Phishing in your phone: Your cell phone is at risk. BATON ROUGE (WAFB) - If you have a cell phone, the government can tap into your life anytime they want without you ever knowing. 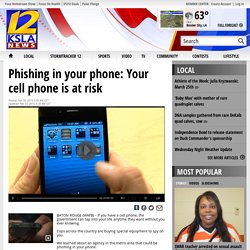 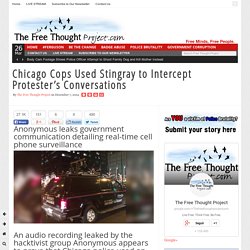