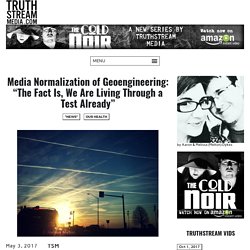 The article’s headline, “Is It O.K. to Tinker With the Environment to Fight Climate Change?” Should have been: “It is O.K. to Tinker with the Very AIR We All Breathe to Fight a Crisis Created by Dishonest ‘Scientific’ Data”. Apparently Harvard scientists David Keith and Frank Keutsch are moving ahead with plans for atmospheric geoengineering experiments, according to Harvard Scientists Moving Ahead on Plans for Atmospheric Geoengineering Experiments, published in MIT Technology Review. (Shocking, isn’t it. Keith has long been an outspoken proponent of “atmospheric geoengineering” or “solar geoengineering.” Keith’s plans for the planet, via NYT: Key phrase “if things go right”… Continuing: How unfortunate for Tucson… Oh good. As IFLScience detailed in “The U.S.

Chemtrail Pilot Signals World! 100% Proof! Chemtrail Pilot Blows the Lid Off OPERATION INDIGO SKYFOLD. Update 2Jan2016: In confirmation to the Indigo Skyfold pilot’s testimony that is the main subject of this article, another US Air Force personnel has thrown herself into the battle against chemtrail and global geo-engineering operations. 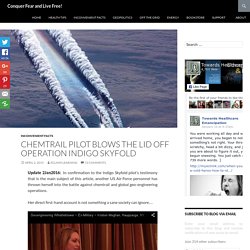 Her direct first-hand account is not something a sane society can ignore… But the creativity of the trolls to twist even their own positions and facts is an expression of their growing desperation. They would even claim they’re with us. The battle against chemical and biological warfare in all their forms, e.g. chemtrail, vaccines, and GMO, is humanity’s battle. This is our battle against pure evil that is now occupying critical positions of power. Top Climate Scientist Warns Against Injecting Stratospheric Particles Into The Atmosphere. Dr. 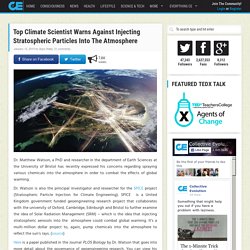 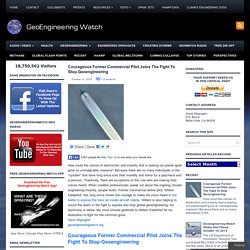 Because there are so many individuals in the "system" that have long since sold their morality and honor for a paycheck and a pension. Thankfully, there are exceptions to this rule who are making their voices heard. When credible professionals speak out about the ongoing climate engineering insanity, people listen. Geoengineering Expands As Industrialized Civilization Spirals Into Collapse » Geoengineering Expands As Industrialized Civilization Spirals Into Collapse. Dane Wigington geoengineeringwatch.org As the global economic house of cards continues to collapse with increasing momentum, the vast majority of global populations are, unfortunately, still looking through a very tainted and distorted lens. 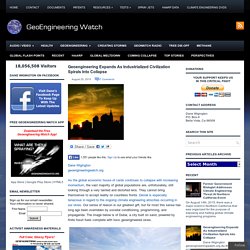 They cannot bring themselves to accept reality on countless fronts. Denial is especially tenacious in regard to the ongoing climate engineering atrocities occurring in our skies. Our sense of reason is our greatest gift, but for most this sense has long ago been overridden by societal conditioning, programming, and propaganda. The image below is of Dubai, a city built on sand, powered by finite fossil fuels complete with toxic geoengineered skies.

Spotted in Sky Over the US Why is it Being Kept a Secret (Full Length) YouTube. Climate Intervention Reflecting Sunlight to Cool Earth. Why Geoengineering is “Untested and Untestable” Nature has a new opinion piece up that signals a bold new push for field experiments into techo hacking the climate system, usually known as “geoengineering.” 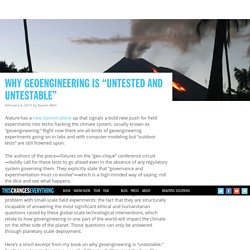 Right now there are all kinds of geoengineering experiments going on in labs and with computer modeling but “outdoor tests” are still frowned upon. The authors of the piece—fixtures on the “geo-clique” conference circuit—boldly call for these tests to go ahead even in the absence of any regulatory system governing them. They explicitly state that “governance and experimentation must co-evolve”—which is a high-minded way of saying: roll the dice and see what happens. The Fight to Control the Global Climate. "If we could experiment with the atmosphere and literally play God, it's very tempting to a scientist. 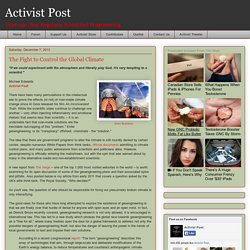 " Michael EdwardsActivist Post There have been many permutations in the intellectual war to prove the effects (or not) of man-made climate change since Al Gore released his film An Inconvenient Truth. While the scientific sides continue to challenge one another -- very often injecting inflammatory and emotional rhetoric that seems less than scientific -- it is an undeniable fact that man-made solutions are the inevitable outcropping of this "problem. " Enter geoengineering, or its "conspiracy" offshoot, chemtrails - the "solution.

" The idea that there are government programs to alter the climate is still roundly denied by certain circles, despite numerous White Papers from think tanks, official documents admitting to climate control plans, and many public admissions from scientists and politicians alike. Your comments are welcome.... 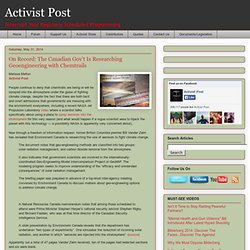