A THIRD of British universities are in a free-speech crisis. Is ‘freedom’ just another word now? — RT Op-ed. Cancel culture is flourishing in a third of UK universities, a new report shows. 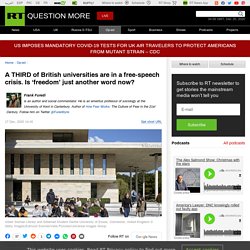 Long-dismissed as a right-wing talking point, censorship has grown into an insidious beast behind the thin veil of risk-management rhetoric. Everyone should be disturbed by the findings of a new report, just out, on cancel culture in British Universities. The report, published by the think-tank Civitas, indicates that the situation is so dire in 48 universities –including elite institutions such as Oxford, Cambridge and St Andrews– that legislation is needed to stop campus censorship! In British universities the policing of language and of dissident views has become institutionalised. The Civitas report indicates that 55 percent of universities have experienced a ‘cancel culture’ event, in which zealous crusaders targeting freedom of expression have demanded restriction on the controversial views of academics, students or invited speakers. In effect, this denudes the right to free speech of content. College student earns a 4.0 and immediately drops out to tell people they are being scammed – Anonymous. 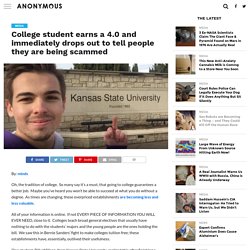 All of your information is online. One student, Billy Willson, from Kansas State University, realized this after finishing a semester with a 4.0 GPA, saying what so many were possibly afraid to say. Well, it gets to the point that common sense trumps your parents’ ideas. Willson made a public notice about his move, with a simple Facebook photo and message that went viral. “Now that i’ve finished my first semester I think it’s safe to say… FUCK COLLEGE. 1. 2. 3. Though Willson’s math may be slightly off, it is close. GAO found that: The Answer to Common Core: Alternative Models of Education : The Corbett Report. Podcast: Play in new window | Download | Embed by James CorbettBoilingFrogsPost.com June 3, 2014 One does not have to scratch very deeply into the surface of pop culture to see that “schools” are nearly universally portrayed in our culture as boring, stultifying, prison-like environments where students have to struggle to maintain consciousness. 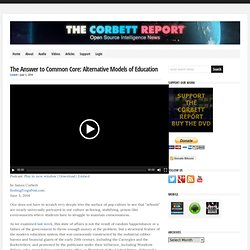 As we examined last week, this state of affairs is not the result of random happenstance or a failure of the government to throw enough money at the problem, but a structural feature of the modern education system that was consciously constructed by the industrial robber barons and financial giants of the early 20th century, including the Carnegies and the Rockefellers, and promoted by the politicians under their influence, including Woodrow Wilson, who, years before coming into office as President of the United States, delivered a lecture on “The Meaning of a Liberal Education” where he stated: History… Connected: The Deliberate Dumbing Down of America w/ Charlotte Iserbyt.

Tonight, on History… So It Doesn’t Repeat: we discuss the past, present, and future of public schooling, with Charlotte Iserbyt, former Sr. 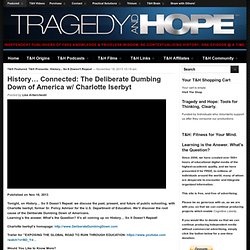 Policy Advisor for the U.S. Department of Education. We’ll discover the root cause of the Deliberate Dumbing Down of Americans. Learning’s the answer. What’s the Question? » Ron Paul: “Common Core Is Really The Last Straw” Alex Jones. Exclusive interview: Former Congressman slams deliberate plan to create dumbed down, obedient population Kit Daniels Infowars.com May 5, 2014 In this exclusive interview with Infowars, former congressman and presidential candidate Dr. 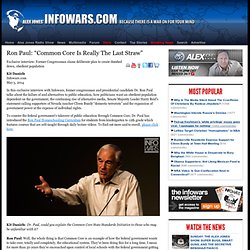 Ron Paul talks about the failure of and alternatives to public education, how politicians want an obedient population dependent on the government, the continuing rise of alternative media, Senate Majority Leader Harry Reid’s statement calling supporters of Nevada rancher Cliven Bundy “domestic terrorists” and the expansion of government power at the expense of individual rights. To counter the federal government’s takeover of public education through Common Core, Dr. Debunked: Common Core 'State Led' Facing a growing tsunami of opposition across the country, proponents of nationalizing K-12 schooling through the Obama administration-pushed Common Core education standards regularly claim that the educational “reform” scheme is “state-led.”

The reality...is that the deeply controversial standards [are] almost entirely the product of billionaires, the establishment, Obama administration machinations, and an assortment of front groups and trade associations funded by Bill Gates and the federal government. Some 45 states have quietly adopted Common Core — largely owing to taxpayer-funded bribes and waivers from other federal mandates handed out by the Obama administration. – senseih

After all, they are called “Common Core State Standards” (CCSS), and the federal government is prohibited by the Constitution and U.S. law from meddling in what students learn. 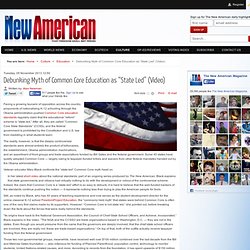 The reality, however, is that the deeply controversial standards were almost entirely the product of billionaires, the establishment, Obama administration machinations, and an assortment of front groups and trade associations funded by Bill Gates and the federal government. Pro-Common Core Deception Falling Apart.