The unwinding of America. A visceral sense of domestic decline is coursing through contemporary American culture and politics – and it’s become one of the central themes of this year’s presidential campaign. 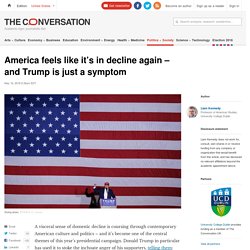 The Truth About The Fall of Rome: Modern Parallels. TheJointForceinaContestedandDisorderedWorld. The Joint Force in a Contested and Disordered World. Public Trust in Government: 1958-2015. Public trust in the government remains near historic lows. 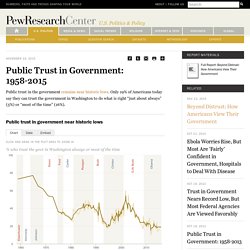 The propaganda machine was so well oiled, the savings rate actually reached 1.9% in 2005, as the masses all believed they would live luxurious retirements off their home equity windfall. How’d that delusion work out? The current level of 5.6% is seen as troublesome by the powers that be. They cannot accept the crazy concept of saving and investment when their entire warped paradigm is built upon borrowing and consumption. Banks don’t make money when you save and they despise when you use cash. They can’t sustain their opulent lifestyles without their 3% VIG on every electronic transaction, 15% compounded interest on the $5,000 average credit card balance, billions in late fees for being one day late with your payment, $4 on every ATM transaction, and the myriad of other fees and surcharges designed to bilk you and keep you from saving. The saving rate will continue to climb as people have no choice to make up for years of living beyond their means. – senseih 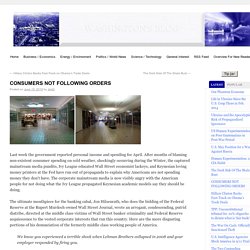 Global Research - Centre for Research on Globalization. “A hegemon is supposed to solve international crises, not cause them.” – Christopher Layne, The American Conservative, May 1, 2010 Nothing upsets those drunk on imperialist virtue than the fact it might end. 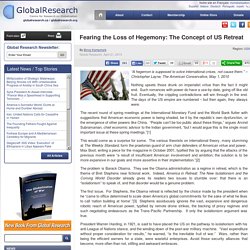 Whatever Became of Economists and the American economy. Forget Your Neighbors, You Must Focus On Saving Your Family While You Still Can. Yesterday, I wrote an article which I found very difficult to publish because of its very dire consequences. 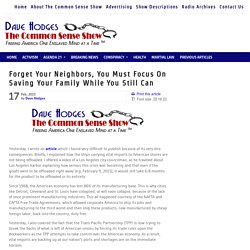 Neoconservatives arrayed in their Washington offices are congratulating themselves on their success in using the Charlie Hebdo affair to reunite Europe with Washington’s foreign policy. 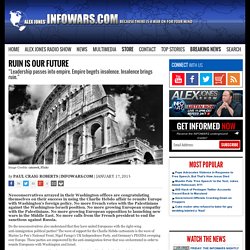 No more French votes with the Palestinians against the Washington-Israeli position. No more growing European sympathy with the Palestinians. No more growing European opposition to launching new wars in the Middle East. No more calls from the French president to end the sanctions against Russia. Thoughts on Election Day: Relax—Both Parties Are Going Extinct.

Whichever side emerges victorious, both Republicans and Democrats should face up to a much bigger truth: Neither party as currently constituted has a real future. 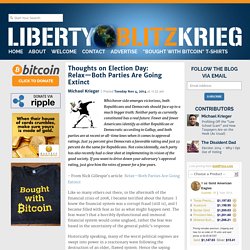 Fewer and fewer Americans identify as either Republican or Democratic according to Gallup, and both parties are at recent or all-time lows when it comes to approval ratings. Just 39 percent give Democrats a favorable rating and just 33 percent do the same for Republicans. Thanks To Obama’s Incompetence, Ebola Is Now Out Of Control In America. Much of the responsibility for the Ebola crisis that the United States is now facing can be laid squarely at the feet of Barack Obama. 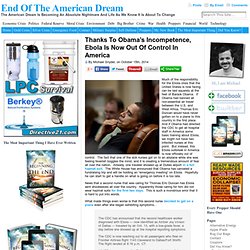 If Obama had banned all non-essential air travel between the U.S. and West Africa, Thomas Eric Duncan would have never gotten on to a plane to this country in the first place. And if Obama had directed the CDC to get all hospital staff in America some basic training about Ebola, we might not have two infected nurses at this point. But instead, this Ebola outbreak in America is now officially out of control. Protesters Hit Back at Cops — in Court. Protest season is in full swing. 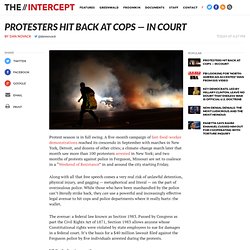 A five-month campaign of fast-food-worker demonstrations reached its crescendo in September with marches in New York, Detroit, and dozens of other cities; a climate-change march later that month saw more than 100 protesters arrested in New York; and two months of protests against police in Ferguson, Missouri are set to coalesce in a “Weekend of Resistance” in and around the city starting Friday. Along with all that free speech comes a very real risk of unlawful detention, physical injury, and gagging — metaphorical and literal — on the part of overzealous police. While those who have been manhandled by the police can’t literally strike back, they can use a powerful and increasingly effective legal avenue to hit cops and police departments where it really hurts: the wallet.

The avenue: a federal law known as Section 1983. Protesters Hit Back at Cops — in Court. The U.S. National Debt Has Grown By More Than A Trillion Dollars In The Last 12 Months. The idea that the Obama administration has the budget deficit under control is a complete and total lie. 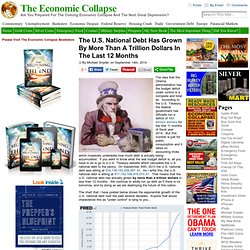 According to the U.S. Treasury, the federal government has officially run a deficit of 589 billion dollars for the first 11 months of fiscal year 2014. But this number is just for public consumption and it relies on accounting tricks which massively understate how much debt is actually being accumulated. If you want to know what the real budget deficit is, all you have to do is go to a U.S. Treasury website which calculates the U.S. national debt to the penny.

The U.S. National Debt Has Grown By More Than A Trillion Dollars In The Last 12 Months. Michael SnyderEconomic Collapse September 15, 2014 The idea that the Obama administration has the budget deficit under control is a complete and total lie. According to the U.S. Treasury, the federal government has officially run a deficit of 589 billion dollars for the first 11 months of fiscal year 2014. What It's All About: Russia, China Begin Construction Of World's Largest Gas Pipeline. If after months of Eurasian axis formation, one still hasn't realized why in the grand game over Ukraine supremacy - not to mention superpower geopolitics - Europe, and the West, has zero leverage, while Russia has all the trump cards, then today's latest development in Chinese-Russian cooperation should make it abundantly clear. Overnight, following a grand ceremony in the Siberian city of Yakutsk, Russia and China officially began the construction of a new gas pipeline linking the countries.

The bottom line to Russia - nearly half a trillion after China's CNPC agreed to buy $400bn in gas from Russia's Gazprom back in May. In return, Russia will ship 38 billion cubic meters (bcm) of gas annually over a period of 30 years. Glubb-empire.pdf. What Drives The West’s Self-Destructive Belligerence? The “Reconstruction and Enlargement” of Europe.

That is how the corporate-funded Atlantic Council – NATO’s defacto public relations front and think tank – is describing the current agenda of the “transatlantic community” during their celebration of the “25th anniversary of the fall of the Berlin Wall, the 15th anniversary of NATO’s first post-Cold War enlargement, and the 10th anniversary of the “big bang” enlargements of both the European Union and NATO.” Readers might notice that the EU and NATO’s “big bang” enlargements occurred long after the Cold War ended – in other words, long after NATO’s alleged reason for existing expired. Yet it not only continued to exist, it in fact expanded and continues to expand to this very day. Its presence in Ukraine and Georgia via proxy regimes installed through now admitted US-backed subversion is reminiscent to Nazi Germany’s aggressive pre-war expansion.

Buffers Vs. Empire Building Today, similarly, Russia seeks buffers. New alliance will stop NATO aggression? Russian President Vladimir Putin has said recently that his meeting with Chinese President Xi Jinping earlier this week in Shanghai marked a new stage in Russia-China relations, and that the two countries will roll out all-around cooperation. China and Russia signed a $400 billion (237.1 billion pounds) gas supply deal on Wednesday, securing the world’s top energy user a major source of cleaner fuel and opening up a new market for Moscow as it risks losing European customers over the Ukraine crisis.

Furthermore, the two countries began joint military exercises in the East China Sea in a clear show of strength against Japan, a western ally. The Chinese President has also openly demonstrated his desire to create a counter-alliance to the U.S. Speaking on May 20 President Xi Jinping called for the creation of a new Asian structure for security cooperation based on a regional group that includes Russia and Iran and excludes the United States. ‘World moving away from American financial hegemony’ US Airforce FALLING BEHIND Russia and China in technology.