Why the West Must End Democracy. Cult of White Privilege IS EthnoMasochism. Europe: Safeguard Values or Disappear. Operation Temperer - U.K. Will Likely Institute Martial Law Measures Within A Year. After the Manchester suicide bombing only two weeks ago I warned my readers that the repetition of terror attacks is breeding complacency within the public, in Europe most acutely.

So, is this “martial law”? Perhaps not quite, but it is damn close to the line, and this is how tyranny is commonly implemented; not all at once, but a stepping stone at a time. – senseih

It is not uncommon now for attacks killing dozens to be forgotten within a week of the event. 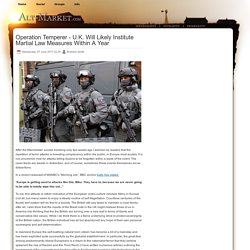 The news feeds are awash in distraction, and of course, sometimes these events themselves act as distractions. In a recent newscast of MSNBC's “Morning Joe”, BBC anchor Katty Kay stated: “Europe is getting used to attacks like this, Mika. Barbarians Inside the Gates? UN Offers Solution to Problem It Created. 5 Things the Media Won't Report About the Refugee Crisis. Cloward & Piven and the Immigration Crisis - The Front Line Of Defense. Central America Newspapers Promote Obama Policies on Illegals. Newspapers in El Salvador and Honduras are promoting policies by the Obama administration that defer deportation to minors brought to the United States as children by their parents — known as "Dreamers" — and those that are housing illegal children at military bases in the South and West. 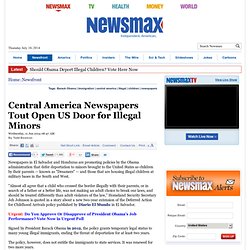 "Almost all agree that a child who crossed the border illegally with their parents, or in search of a father or a better life, was not making an adult choice to break our laws, and should be treated differently than adult violators of the law," Homeland Security Secretary Jeh Johnson is quoted in a story about a new two-year extension of the Deferred Action for Childhood Arrivals policy published by Diario El Mundo in El Salvador.

Urgent: Do You Approve Or Disapprove of President Obama's Job Performance? Vote Now in Urgent Poll. Breitbart Exclusive: Border Patrol Rep Claims Agents Ordered to Stand Down. By Brandon Darby, Breitbart.com The National Border Patrol Council has come forward to reveal to the American public once again management practices that could be risking the lives of Americans -- and the lives of illegal immigrants. 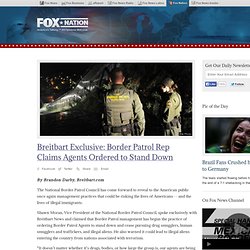 Shawn Moran, Vice President of the National Border Patrol Council, spoke exclusively with Breitbart News and claimed that Border Patrol management has begun the practice of ordering Border Patrol Agents to stand down and cease pursuing drug smugglers, human smugglers and traffickers, and illegal aliens. He also warned it could lead to illegal aliens entering the country from nations associated with terrorism. “It doesn’t matter whether it’s drugs, bodies, or how large the group is, our agents are being ordered to stand down by Border Patrol management,” said Moran. Aerial Footage Shows Massive Holes In Border Fence: The Gates Are Wide Open. NY DHS Offers $500 To Rat Out Your Neighbors Michigan DOA Thugs Force Dairy Farmer To Dump Raw Milk 6 Illegals Kill Black Homeless Man: Thanks Obama! 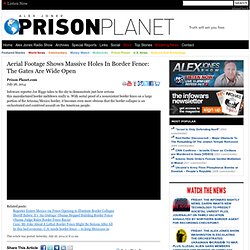 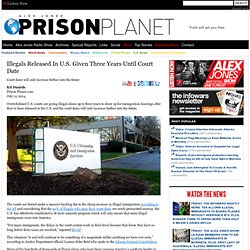 The courts are buried under a massive backlog due to the sharp increase in illegal immigration according to the AP and considering that the 90% of illegals who miss their court dates are rarely prosecuted anyway, the U.S. has effectively established a de facto amnesty program which will only ensure that more illegal immigrants cross into America.

“For many immigrants, the delays in the court system work in their favor because they know they have so long before their cases are resolved,” reported the AP. A d v e r t i s e m e n t “How is a judge going to deport these people if they have a United States citizen as a child?” [ad] This article was posted: Saturday, July 12, 2014 at 1:26 pm. Barack Obama Cannot Get Congress To Pass Amnesty For Illegal Immigrants So Now He Is Just Going To Ram It Down Our Throats Any Way That He Can. If you are an illegal immigrant and you have not been arrested for committing a crime, the odds that you will ever be deported have now gone way, way down. 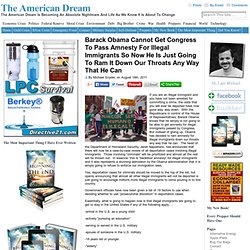 With the Republicans in control of the House of Representatives, Barack Obama knows that he simply is not going to be able to get amnesty for illegal immigrants passed by Congress. But instead of giving up, Obama has decided to ram amnesty for illegal immigrants down our throats any way that he can. Obama Gives Murrieta Area ICE Agents Temporary Leave. Is Greece the Future of America? Sheldon RichmanCampaign For Liberty Thursday March 18, 2010 It may be possible to look into America’s future. 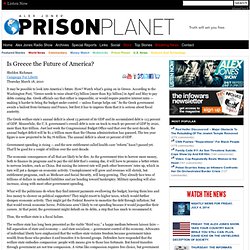 How? Watch what’s going on in Greece. According to the Washington Post, “Greece needs to raise about €23 billion [more than $31 billion] in April and May to pay debts coming due. Greek officials say that either is impossible, or would require punitive interest rates — making it harder to bring the budget under control — unless Europe helps out.” The Greek welfare state’s annual deficit is about 13 percent of its GDP and its accumulated debt is 113 percent of GDP. Government spending is rising — and the new entitlement called health-care “reform” hasn’t passed yet. One in three Americans slipped below the poverty line between 2009 and 2011. By Brad Plumer January 8 How many people in the United States are poor? 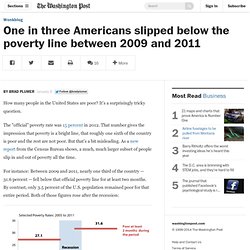 It's a surprisingly tricky question. The "official" poverty rate was 15 percent in 2012. That number gives the impression that poverty is a bright line, that roughly one sixth of the country is poor and the rest are not poor. But that's a bit misleading. For instance: Between 2009 and 2011, nearly one third of the country — 31.6 percent — fell below that official poverty line for at least two months. The Weight of the Poor: A Strategy to End Poverty. From the Monday, May 2, 1966 issue of The Nation How can the poor be organized to press for relief from poverty? 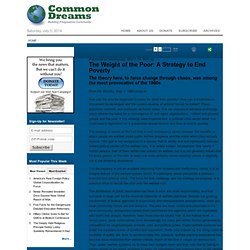 How can a broad-based movement be developed and the current disarray of activist forces be halted? These questions confront, and confound, activists today. It is our purpose to advance a strategy which affords the basis for a convergence of civil rights organizations, militant anti-poverty groups and the poor. If this strategy were implemented, a political crisis would result that could lead to legislation for a guaranteed annual income and thus an end to poverty.

Cloward–Piven strategy. The Cloward–Piven strategy is a political strategy outlined in 1966 by American sociologists and political activists Richard Cloward and Frances Fox Piven that called for overloading the U.S. public welfare system in order to precipitate a crisis that would lead to a replacement of the welfare system with a national system of "a guaranteed annual income and thus an end to poverty".[1][2] History[edit] Cloward and Piven were both professors at the Columbia University School of Social Work. 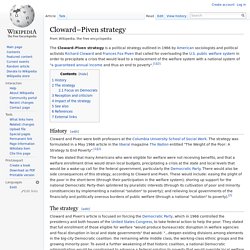 Is The Cloward-Piven Strategy Being Used To Destroy America? Brandon SmithAlt Market July 4, 2014 In the mid-sixties at the height of the “social revolution” the line between democratic benevolence and outright communism became rather blurry. The Democratic Party, which controlled the presidency and both houses of Congress, was used as the springboard by social engineers to introduce a new era of welfare initiatives enacted in the name of “defending the poor”, also known as the “Great Society Programs”. These initiatives, however, were driven by far more subversive and extreme motivations, and have been expanded on by every presidency since, Republican and Democrat alike.