MMT in a nutshell

Playing Monopolis Monopoly: An inquiry into why we are making ourselves so miserable. By J. 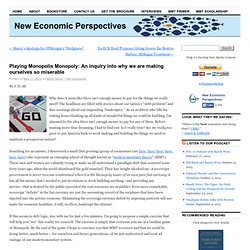 D. Scott Fullwiler on currency sovereign as "monopolist" Promoted from the comments: I’m not sure how any non-MMT economists are interpreting the MMT view of “monopoly money” (and I don’t really care—there are blogs by MMT economists that can answer and authoritatively discuss that question rather easily for those interested, so I’m not quite clear on why there’s any interest in relying on secondary sources), but here’s what it actually means: 1. 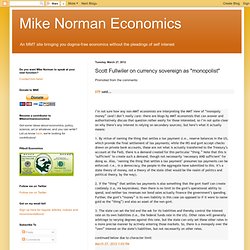 By virtue of naming the thing that settles a tax payment (i.e., reserve balances in the US, which provide the final settlement of tax payments; while the IRS and govt accept checks drawn on private bank accounts, these are not what is actually transferred to the Treasury’s account at the Fed), there is a demand created for this particular “thing.” Note that this is ‘sufficient’ to create such a demand, though not necessarily ‘necessary AND sufficient’ for doing so. The Public Money Monopoly (Pt. II)

By Dan Kervick In Part One of this essay I defended the MMT view that the national government is the monopoly issuer of the currency in the US, and I attempted to clarify the actual economic status of that government currency with respect to the Fed’s conventional balance sheet accounting. 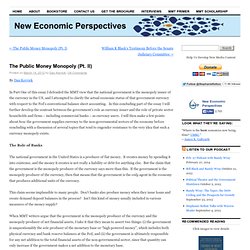 In this concluding part of the essay I will further develop the contrast between the government’s role as currency issuer and the role of private sector households and firms – including commercial banks – as currency users. I will then make a few points about how the government supplies currency to the non-governmental sectors of the economy before concluding with a discussion of several topics that tend to engender resistance to the very idea that such a currency monopoly exists. The Role of Banks The national government in the United States is a producer of fiat money. The Public Money Monopoly (Pt. I) - New Economic PerspectivesNew Economic Perspectives. By Dan Kervick Modern Monetary Theory (MMT) emphasizes the central role of governments in sovereign monetary systems. 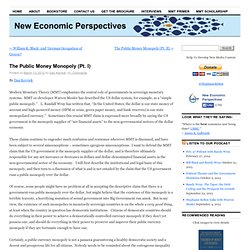 MMT co-developer Warren Mosler has described the US dollar system, for example, as a “simple public monopoly.” Reporting From Outside Party Lines. MEDIA ROOTS — Dr. 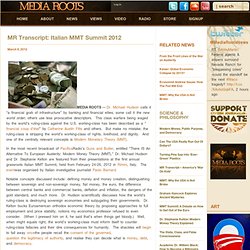 Michael Hudson calls it “a financial grab of infrastructure” by banking and financial elites; some call it the new world order; others use less provocative descriptors. This class warfare being waged by the world’s ruling-class against the U.S. working-class has been described as a “financial coup d’état” by Catherine Austin Fitts and others. But make no mistake; the ruling-class is stripping the world’s working-class of rights, livelihood, and dignity. And one of the centrally relevant concepts is Modern Monetary Theory (MMT). In the most recent broadcast of Pacifica Radio’s Guns and Butter, entitled “There IS An Alternative To European Austerity: Modern Money Theory (MMT),” Dr.

Notable concepts discussed include: defining money and money creation, distinguishing between sovereign and non-sovereign money, fiat money, the euro, the difference between central banks and commercial banks, deflation and inflation, the dangers of the gold standard, and much more. Modern Monetary Theory (MMT) in a Nutshell. A rampaging mutant macroeconomic theory called , or MMT for short, is kicking keisters and smacking down conventional wisdom in economic circles these days. 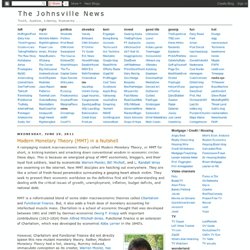 This is because an energized group of MMT economists, bloggers, and their loyal foot soldiers, lead by economists Warren Mosler , Bill Michell , and L. Randall Wray are swarming on the internet. New MMT disciples are hatching out everywhere. They are like a school of fresh-faced paramedics surrounding a gasping heart attack victim. They seek to present their economic worldview as the definitive first aid for understanding and dealing with the critical issues of growth, unemployment, inflation, budget deficits, and national debt. The Center of the Universe » Blog Archive » MMT history and overview. A rampaging mutant macroeconomic theory called Modern Monetary Theory, or MMT for short, is kicking keisters and smacking down conventional wisdom in economic circles these days. 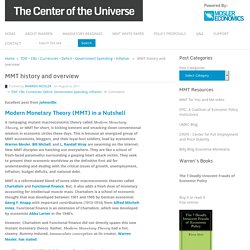 This is because an energized group of MMT economists, bloggers, and their loyal foot soldiers, lead by economists Warren Mosler, Bill Michell, and L. Randall Wray are swarming on the internet. New MMT disciples are hatching out everywhere. They are like a school of fresh-faced paramedics surrounding a gasping heart attack victim. They seek to present their economic worldview as the definitive first aid for understanding and dealing with the critical issues of growth, unemployment, inflation, budget deficits, and national debt.

MMT is a reformulated blend of some older macroeconomic theories called Chartalism and Functional finance. However, Chartalism and Functional finance did not directly spawn this new mutant monetary theory. Vickrey, William. 1996. 15 Fatal Fallacies of Financial Fundamentalism. Fifteen Fatal Fallacies of Financial Fundamentalism A Disquisition on Demand Side Economics William Vickrey October 5, 1996 Much of the conventional economic wisdom prevailing in financial circles, largely subscribed to as a basis for governmental policy, and widely accepted by the media and the public, is based on incomplete analysis, contrafactual assumptions, and false analogy. 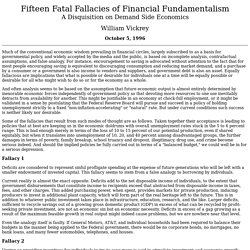 For instance, encouragement to saving is advocated without attention to the fact that for most people encouraging saving is equivalent to discouraging consumption and reducing market demand, and a purchase by a consumer or a government is also income to vendors and suppliers, and government debt is also an asset. Debt, Deficits, and Modern Monetary Theory — An Interview with Bill Mitchell. Bill Mitchell is the Research Professor in Economics and the Director of the Centre of Full Employment and Equity at the University of Newcastle, Australia. 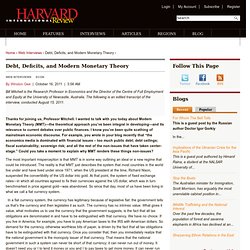 The following is an edited transcript of the interview, conducted August 15, 2011. Thanks for joining us, Professor Mitchell. I wanted to talk with you today about Modern Monetary Theory (MMT)—the theoretical approach you’ve been integral in developing—and its relevance to current debates over public finances. I know you’ve been quite scathing of mainstream economic discourse. MMT – an accounting-consistent, operationally-sound theoretical approach. Many people have drawn to my attention in recent weeks the evolution of the Modern Monetary Theory (MMT) Wikipedia entry and raised concern about the criticisms that are now on that site. 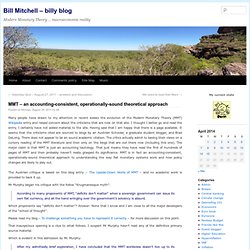 I thought I better go and read the entry. I certainly have not added material to the site. Having said that I am happy that there is a page available. Great Leap Forward » MMT as an Alternative to Austerity. Deficit hysteria grips Washington - Darrell Delamaide's Political Capital. By Darrell Delamaide WASHINGTON (MarketWatch) – Deficit hysteria is rising to fever pitch in Washington as the political jockeying over the budget begins in earnest.

“Fiscal nightmare,” “buried under a mountain of debt,” “awash in red ink” – these are some of the colorful phrases being bandied about by politicians, pundits and even journalists ostensibly reporting facts. Most of them are winging it on a single undergraduate course in economics, if that, but they know they’re right because everybody agrees. Yet, if you look out the window, you don’t see any red ink or mountains of debt. The Big Danger In Cutting The Deficit - Forbes.com. Beyond Austerity. When President Obama announced in December 2009 that “We don’t have enough public dollars to fill the hole of private dollars that was created as a consequence of the crisis,” the leader of the largest economy in the world told us that, despite having caused the worst economic crisis in eighty years, neoliberalism was still firmly in charge.

The global economic crisis might suggest that the neoliberal promise—that markets can self-regulate and deliver sustained prosperity for all—was a lie. But that doesn’t seem to have registered with governments, which have, without exception, built their responses to the crisis on a series of myths—the same myths that caused the crisis. Despite millions remaining jobless and poverty rates rising, governments have claimed that there is no alternative but to impose austerity by cutting budget deficits.

The Center of the Universe » Blog Archive » Tom Hickey on MMT. Tom Hickey Reply: April 3rd, 2010 at 12:38 am MDM, the key here is the MMT concept of vertical and horizontal in relation to money creation. The Federal Budget is NOT like a Household Budget: Here’s Why » New Deal 2.0. L. Randall Wray takes the fear and loathing out of understanding federal budget deficits. Whenever a demagogue wants to whip up hysteria about federal budget deficits, he or she invariably begins with an analogy to a household's budget: "No household can continually spend more than its income, and neither can the federal government".

On the surface that, might appear sensible; dig deeper and it makes no sense at all. A sovereign government bears no obvious resemblance to a household. Civilized Money View vs. Monetarist Keynesianism. In Defense of Deficits. The Simpson-Bowles Commission, just established by the president, will no doubt deliver an attack on Social Security and Medicare dressed up in the sanctimonious rhetoric of deficit reduction. (Back in his salad days, former Senator Alan Simpson was a regular schemer to cut Social Security.) The Obama spending freeze is another symbolic sacrifice to the deficit gods. Most observers believe neither will amount to much, and one can hope that they are right. The Deficit: Nine Myths We Can’t Afford » New Deal 2.0. Has the federal government run out of money? UNDERSTANDING MODERN MONETARY THEORY (MMT) & OUR MODERN MONETARY SYSTEM.