On Dit Issue 85.4 by On Dit p.33. The Rock-Star Appeal of Modern Monetary Theory. In early 2013, Congress entered a death struggle—or a debt struggle, if you will—over the future of the US economy. 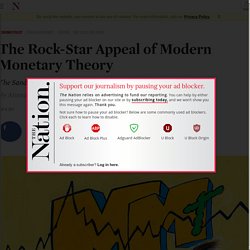 A spate of old tax cuts and spending programs were due to expire almost simultaneously, and Congress couldn’t agree on a budget, nor on how much the government could borrow to keep its engines running. Cue the predictable partisan chaos: House Republicans were staunchly opposed to raising the debt ceiling without corresponding cuts to spending, and Democrats, while plenty weary of running up debt, too, wouldn’t sign on to the Republicans’ proposed austerity. Unemployment Policy in Australia - Per Capita. In the 1970s and 80s all of this changed. 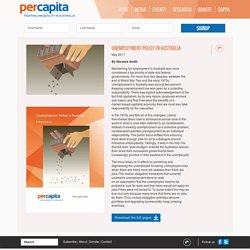 Liberal free-market ideas rose to dominance across most of the world in what is now often referred to as neoliberalism. Instead of viewing unemployment as a collective problem, neoliberalism painted unemployment as an individual responsibility. Listen up, Scott Morrison. It's time to bust the myth of the budget surplus. On Facebook, Malcolm Turnbull’s announcement of Treasury’s mid-year economic and fiscal outlook began with this flawed statement: The Turnbull Government understands that like a household budget, when you are trying to pay off debt, you can’t spend more than you save. 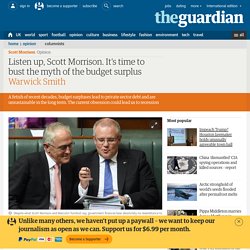 Taxes, and the Parable of "Turning Litter Into Money" By Lambert Strether of Corrente. 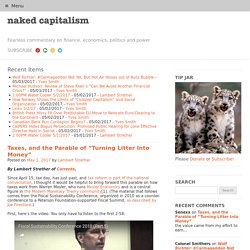 Since April 15, tax day, has just past, and tax reform is part of the national conversation, I thought it would be helpful to bring forward this parable on how taxes work from Warren Mosler, who runs Mosler Economics and is a central figure in the Modern Monetary Theory community[1]. (The material that follows comes from the Fiscal Sustainability Conference, organized in 2010 as a counter-conference to a Peterson Foundation-supported Fiscal Summit, as described by Joe Firestone.)

Sri Lanka can become a 1st World Nation. By Indrajith Andrew Weeraratne Using the "Modern Money Theory” View(s): Since independence in 1948, Sri Lanka has been doomed to be a poor nation without a way of getting out of the “poor nation” status due to an archaic, self-destructive underlying economic framework that was imposed on Sri Lanka. 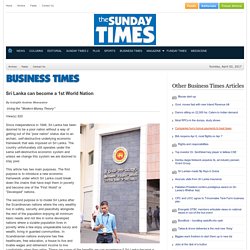 The country unfortunately still operates under the same self-destructive economic system and unless we change this system we are doomed to stay poor. This article has two main purposes. The second purpose is to model Sri Lanka after the Scandinavian nations where the very wealthy live in safety, security and peacefully alongside the rest of the population enjoying all minimum basic needs and not like in some developed nations where a sizable population lives in poverty while a few enjoy unspeakable luxury and wealth, living in guarded communities. It is always a puzzle why a nation like Sri Lanka is poor when the people are smart, work hard and quite honest. Taxes, and the Parable of "Turning Litter Into Money" Modern Money and the Obsession Over Fiscal Consolidation. There is a desperate need to break the orthodox, widespread belief that all deficits and debt are equally undesirable. 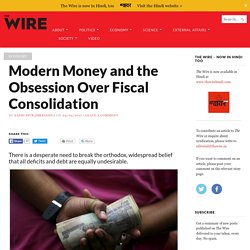 A street side restaurant owner holds a bundle of currency notes as he stands outside his restaurant in New Delhi, India, February 29, 2016. Credit: Reuters/Adnan Abidi The dust kicked up by the annual Budget “event” has long settled. What’s interesting is that the pre-Budget excitement always seems more intense and more drawn out than post-Budget. Year after year, one point of tension in the build up to the Budget is whether or not the government will adhere to a low fiscal deficit target or will it reset the fiscal consolidation target. Embracing Wynne Godley, an Economist Who Modeled the Crisis. Most, like Nouriel Roubini of New York University, issued warnings in informal notes. 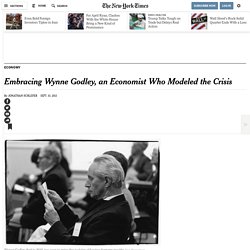 But Mr. Godley “was the most scientific in the sense of having a formal model,” Dr. Bezemer said. It was far from a first for Mr. Godley. Why does a model matter? Mr. Mainstream models assume that, as individuals maximize their self-interest, markets move the economy to equilibrium. The Godley models, by contrast, see banks as central, promoting growth but also posing threats. Why did Mr. Mr. Businessinsider.com. 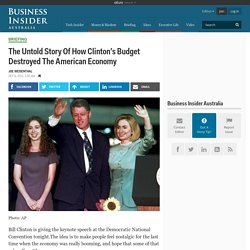 Can we come out now that deficit hysteria is over? Salutin. Sorry, but I’m afraid I don’t agree that Wednesday’s federal budget was a non-event: “cynical,” a “placeholder,” “bafflegab and buzzwords” — as others wrote. 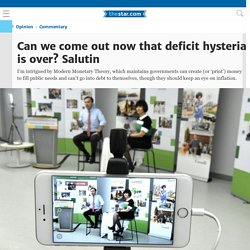 I think this budget rocked, in one sense: it did a 180 on the stifling monomania of the last 30 years. Canadian Federal Government Rejoins Reality. Rick Salutin wrote an article that is popular in Modern Monetary Theory circles -- "Can we come out now that the deficit hysteria is over? 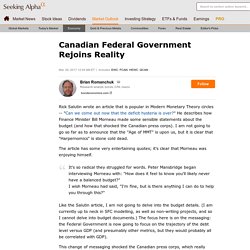 " He describes how Finance Minister Bill Morneau made some sensible statements about the budget (and how that shocked the Canadian press corps).