What If China Dumps US Treasury Bonds? Paul Krugman inches toward MMT. By L. 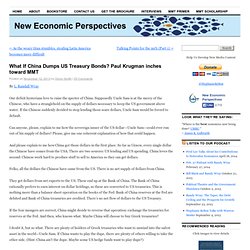 Randall Wray Our deficit hysterians love to raise the specter of China. Supposedly Uncle Sam is at the mercy of the Chinese, who have a stranglehold on the supply of dollars necessary to keep the US government above water. If the Chinese suddenly decided to stop lending those scare dollars, Uncle Sam would be forced to default. Can anyone, please, explain to me how the sovereign issuer of the US dollar—Uncle Sam—could ever run out of his supply of dollars?

And please explain to me how China got those dollars in the first place. All About the ECB. Joe Weisenthal has a good post going after Roger Altman’s assertion that European austerity was necessary to satisfy the markets. 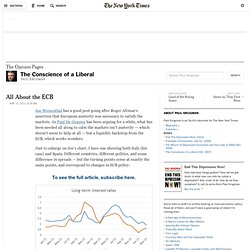 As Paul De Grauwe has been arguing for a while, what has been needed all along to calm the markets isn’t austerity — which doesn’t seem to help at all — but a liquidity backstop from the ECB, which works wonders. Just to enlarge on Joe’s chart, I have one showing both Italy (his case) and Spain. Different countries, different politics, and some difference in spreads — but the turning points come at exactly the same points, and correspond to changes in ECB policy: Great Leap Forward » By Jove, He’s Got It: Krugman (Finally) Adopts MMT (And so does Summers) 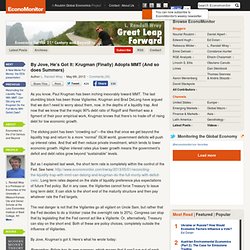 Randall Wray · · Share This Print As you know, Paul Krugman has been inching inexorably toward MMT. The last stumbling block has been those Vigilantes. Krugman and Brad DeLong have argued that we don’t need to worry about them, now, in the depths of a liquidity trap. And now that we know that the magic 90% debt ratio of Rogoff and Reinhart was a figment of their poor empirical work, Krugman knows that there’s no trade-off of rising debt for low economic growth.

The sticking point has been “crowding out”—the idea that once we get beyond the liquidity trap and return to a more “normal” ISLM world, government deficits will push up interest rates. But as I explained last week, the short term rate is completely within the control of the Fed. Great Leap Forward » KRUGMAN DOES MMT AGAIN: GOLDBUGS AND BITBUGS. Author: L. 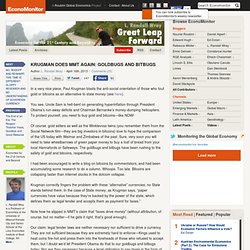 Randall Wray · · Share This Print In a very nice piece, Paul Krugman blasts the anti-social orientation of those who tout gold or bitcoins as an alternative to state money (see here). You see, Uncle Sam is hell-bent on generating hyperinflation through President Obama’s run-away deficits and Chairman Bernanke’s money-dumping helicopters. To protect yourself, you need to buy gold and bitcoins—like NOW!

Of course, gold sellers as well as the Winklevoss twins (you remember them from the Social Network film—they are big investors in bitcoins) love to hype the comparison of the US today with Weimar and Zimbabwa of the past. The Antisocial Network of Bitcoins. The economic significance of this roller coaster was basically nil. 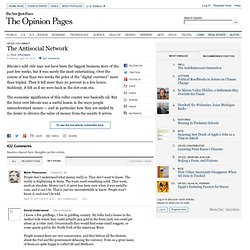 But the furor over bitcoin was a useful lesson in the ways people misunderstand money — and in particular how they are misled by the desire to divorce the value of money from the society it serves. What is bitcoin? It’s sometimes described as a way to make transactions online — but that in itself would be nothing new in a world of online credit-card and PayPal transactions. In fact, the Commerce Department estimates that by 2010 about 16 percent of total sales in America already took the form of e-commerce. Fighting Fiscal Phantoms. What has changed? 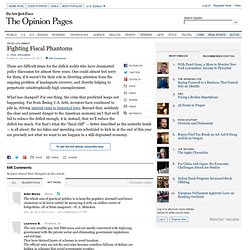 For one thing, the crisis they predicted keeps not happening. Far from fleeing U.S. debt, investors have continued to pile in, driving interest rates to historical lows. Paul Krugman doubles down on the MMT POV on deficits. Krugman Compares UK And US National Debt. Paul Krugman posts a simple chart that makes a profound point. 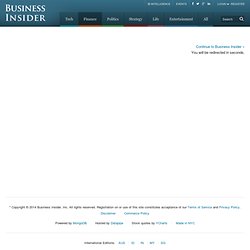 It compares the yield on UK debt vs. US debt. What should stand out for you, instantly, is that the two countries borrow at virtually identical rates, and have for years. What this should show to people is that much of the popular stories that people tell about sovereign debt is a myth. Countries that borrow in their own currencies and can "print" at will don't have default risk, so their borrowing costs are an expression of expectations of future interest rates and growth. 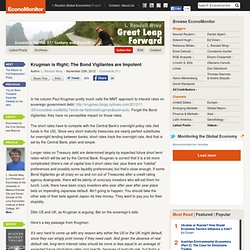 Randall Wray · · Share This Print In his column Paul Krugman pretty much nails the MMT approach to interest rates on sovereign government debt: Forget the Bond Vigilantes; they have no perceptible impact on those rates. The short rates have to compete with the Central Bank’s overnight policy rate (fed funds in the US). Since very short maturity treasuries are nearly perfect substitutes for overnight lending between banks, short rates track the overnight rate.

And that is set by the Central Bank, plain and simple. Longer rates on Treasury debt are determined largely by expected future short term rates–which will be set by the Central Bank. Incredible Credibility. There’s an interesting mix of contrast and similarity between the policy debates in Britain and the United States right now. 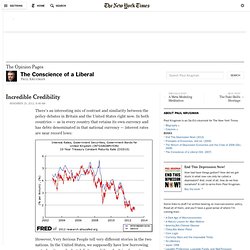 In both countries — as in every country that retains its own currency and has debts denominated in that national currency — interest rates are near record lows: However, Very Serious People tell very different stories in the two nations. Paul Krugman does some MMT. Krugman, Tabarrok, Cowen and the bond vigilante fallacy. 3spoken: Keen vs Krugman and why it matters. It seems the first skirmish in the battle for economic minds may be at an end. 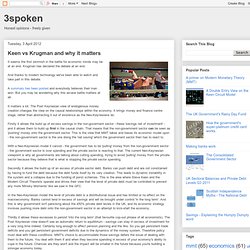 Krugman has declared the debate at an end. And thanks to modern technology we've been able to watch and take part in this debate. A summary has been posted and everybody believes their man won. Oh My, Paul Krugman. EmailShare 34EmailShare Q: What do John May­nard Keynes and Steve Keen have in common? A: They’ve both been mis­read by Paul Krug­man. In just a cou­ple of days I’ve gone from the priv­i­lege of being acknowl­edged by Krug­man to being mis­read by him, in a way that would have any stu­dent failed in a mul­ti­ple choice exam.

In a pas­sage where I specif­i­cally referred to DSGE models–which includes both “New Clas­si­cals” and “New Key­ne­sians” he inter­preted me as refer­ring to New Key­ne­sian mod­els only. And I said “under­ly­ing prin­ci­ples to the DSGE mod­els”, which should have been enough of a clue that I was refer­ring specif­i­cally to New Clas­si­cal mod­els, not New Key­ne­sian ones. Krugman’s Flashing Neon Sign - New Economic PerspectivesNew Economic Perspectives. By Scott Fullwiler Update: Paul Krugman has posted a reply to this post that is a straw man. He and Nick Rowe are viewing this all through the lens of the old Monetarist/Keynesian debates in which there was a choice b/n interest rate targets and monetary aggregate targets; the Monetarist critique assumed the Keynesians were going to keep interest rates at the same level forever and not change them. Once John Taylor came up with his “rule,” everyone agreed an interest rate target could work.

Things I Should Not Be Wasting Time On. I see that Scott Fullwiler has what he thinks is a slam-dunk refutation of what I’ve been saying about banking. Actually, not. Leave aside the continuing confusion between the argument that banks can create inside money — which nobody denies — and the claim that they can create unlimited amounts of inside money, never mind the size of the monetary base, which is what is at issue. Paul Krugman Synthesizes a Little More MMT. Paul Krugman, in “The Simple Analytics of Invisible Bond Vigilantes (Wonkish)”, has lent his support to the view, emphasized by modern monetary theorists, that bond vigilantes cannot impede a sovereign currency issuer.

Krugman has made this important observation in the past, but this time he spells out his reasoning, step by step, and the key points align closely with that of modern monetary theory (MMT). To illustrate his reasoning, Krugman links to a short paper, which includes a simple model he put together while in the air, perhaps somewhere over water between lands Neoclassical Synthesis and Modern Monetary Theory. The model is of the IS-LM variety, so some may prefer to look away while reading. Great Leap Forward » KRUGMAN VERSUS MINSKY: Who Should You Bank On When It Comes to Banking? Author: L. Randall Wray · · Share This Print Last week I explained why Minsky matters, outlining his main contributions.

Krugman on Modern Monetary Theory « Lars P Syll's Blog Docendo discimus. Post Game Analysis. Football season is under way in my part of the world. I usually like to follow some of the post game analysis, especially after a win. Philip Pilkington delivers the goods in a post at Naked Capitalism. I will add links to further analyses if and when they appear. Further Post Game Analysis Most of the hundred plus comments in response to Krugman’s “Oh My, Steve Keen Edition” are worth a read. Travis Fast of Relentlessly Progressive Political Economy offers his thoughts. Krugman "Knocked out of Neoclassical Orbit" by Steve Keen's Meteoric Rise! The Keen/Krugman Debate: A Summary. Paul Krugman and Steve Keen have been debating endogenous versus exogenous money – as well as some other issues – for the past few days.

Paul Krugman vs. MMT: The Great Debate. Unfortunately, it’s probably a bit tough to wade into the debate at this point. So I’ll do my best to summarize what’s going on. Progress on the monetary policy and banking debate. It is Krugman who has shined the headlights on the difference between a currency issuer and a currency user.

In-depth analysis on Credit Writedowns Pro. Debt Is (Mostly) Money We Owe to Ourselves. A PUZZLE SOLVED! Way back in July Paul Krugman asked why Italian and Japanese bond yields were diverging despite similar debt and demographic issues. He didn’t have a firm answer (his words, not mine): PAUL KRUGMAN (SORT OF) DOES SECTORAL BALANCES… Eurozone Problems. I’m giving a talk in Paris tomorrow.