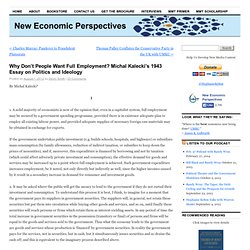 A solid majority of economists is now of the opinion that, even in a capitalist system, full employment may be secured by a government spending programme, provided there is in existence adequate plan to employ all existing labour power, and provided adequate supplies of necessary foreign raw-materials may be obtained in exchange for exports. If the government undertakes public investment (e.g. builds schools, hospitals, and highways) or subsidizes mass consumption (by family allowances, reduction of indirect taxation, or subsidies to keep down the prices of necessities), and if, moreover, this expenditure is financed by borrowing and not by taxation (which could affect adversely private investment and consumption), the effective demand for goods and services may be increased up to a point where full employment is achieved. 2.

It may be asked where the public will get the money to lend to the government if they do not curtail their investment and consumption. 3. 2. New Economic Perspectives: Alternative Fiscal Policies: Why the Job Guarantee is Superior (Wonkish) By Pavlina R. 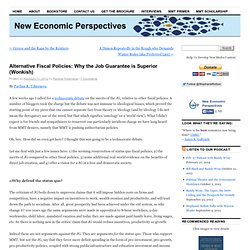 Tcherneva A few weeks ago I called for a technocratic debate on the merits of the JG, relative to other fiscal policies. A number of bloggers took the charge but the debate was not immune to ideological biases, which proved the starting point of my piece that one cannot separate fact from theory or ideology (and by ideology I do not mean the derogatory use of the word, but that which signifies ‘ontology’ or a ‘world view’). What I didn’t expect is for friends and sympathizers to resurrect one particularly invidious charge we have long heard from MMT deniers, namely that MMT is pushing authoritarian policies.

Oh, boy. Let me deal with just a few issues here: 1) the seeming resurrection of status quo fiscal policies, 2) the merits of JG compared to other fiscal policies, 3) some additional real-world evidence on the benefits of direct job creation, and 4) offer a vision for a JG in a free and democratic society. 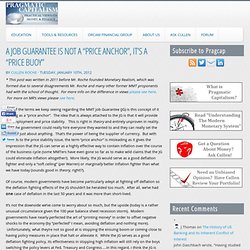 Roche founded Monetary Realism, which was formed due to several disagreements Mr. Roche and many other former MMT proponents had with the school of thought. For more info on the difference in views please see here. For more on MR’s views please see here. The descriptive v. the normative in MMT as a macro theory. Distinguishing the descriptive (positive) from the prescriptive (normative) in MMT is theory-dependent. 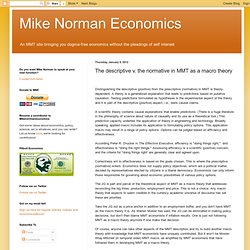 A theory is a generalized explanation that leads to predictions based on putative causation. Testing predictions formulated as hypotheses is the experimental aspect of the theory and it is part of the descriptive (positive) aspect, i.e., tests causal claims. A scientific theory contains causal explanations that enable predictions. (There is a huge literature in the philosophy of science about nature of causality and its use as a theoretical tool.) This predictive capacity underlies the application of theory in engineering and technology. According Peter R. Correctness wrt to effectiveness is based on the goals chosen.

The Job Guarantee and the MMT Core: Part One. MMT Going Mainstream? 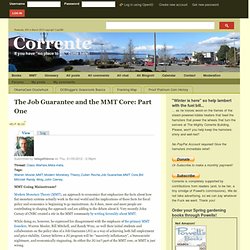 Modern Monetary Theory (MMT), an approach to economics that emphasizes the facts about how fiat monetary systems actually work in the real world and the implications of these facts for fiscal policy and economics is beginning to go mainstream. As it does, more and more people are contributing to shaping the approach and are adding to the debate about it. Very recently John Carney of CNBC created a stir in the MMT community by writing favorably about MMT. While doing so, however, he expressed his disagreement with the emphasis of the primary MMT founders, Warren Mosler, Bill Mitchell, and Randy Wray, as well their initial students and collaborators on the policy idea of a Job Guarantee (JG) as a way of achieving both full employment and price stability. Carney believes a JG program will be: “massively inflationary”, a bureaucratic nightmare, and economically stagnating. The Job Guarantee and the MMT Core: Part Two. MMT and Public Purpose:The Normative Component I ended Part One by saying that Warren Mosler's reply to Cullen Roche is nearly a decisive argument that the Job Guarantee (JG) is a core component of MMT, provided, of course, that one accepts that full employment with price stability is an important component of “public purpose” or “the general welfare,” and that also one thinks that the Government's fiscal policy ought to fulfill the public purpose. 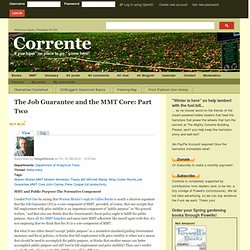 Since all the MMT founders and many later MMT adherents like myself agree with this, it's not surprising that we think that the JG is a core component of MMT. But what if one either doesn't accept “public purpose” as a normative standard guiding Government monetary and fiscal policies, or thinks that full employment with price stability is either not a means that should be used to accomplish the public purpose, or thinks that another means can better accomplish public purpose and still lead to full employment and price stability?

The Job Guarantee and the MMT Core: Part Three, A Reply to John Carney. Parts One and Two In the first two parts of this series, I analyzed views on the Job Guarantee (JG) idea offered by Cullen Roche and Peter Cooper in conjunction with a post by John Carney which kicked off an explosion of blogosphere posts and commentaries on the JG. 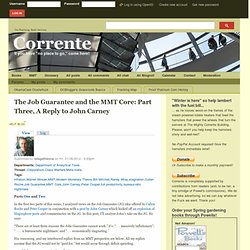 In this post, I'll analyze John's take on the JG. He says: “There are at least three reasons the Jobs Guarantee cannot work.” it's: “. . . massively inflationary”; “. . . . a bureaucratic nightmare; and “. . . economically stagnating.” His reasoning, and my interleaved replies from an MMT perspective are below. The Job Guarantee and the MMT Core: Part Four, John Carney on the Mismatch Problem. The Job Guarantee and the MMT Core: Part Five, Carney on Mismatch and the Distribution of Labor. Does the JG Really Solve the Mismatch Problem? 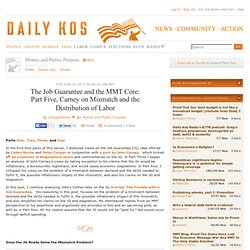 ”The Job Guarantee gets around one of these problems: it guarantees that anyone who comes to the government employment office ready, willing, and able to work will be able to get work for pay and benefits. The problem of mismatch is seemingly solved since the government will just supply the demand for something the unemployed can do. Direct hiring works better, in this sense, than trying to jigger the knobs of monetary policy. The Job Guarantee and the MMT Core: Part Six, Carney on Stagnation and Prosperity.

The JG is a Guarantee of a Job Offer, Not a Job ”It would be possible, of course, to diminish or eradicate the inflationary effect by tightening other government expenditures, raising taxes, or making sure the Jobs Guarantee wages were so low that the increased demand generated would be minimal. 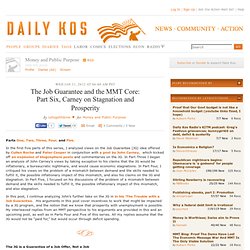 The MMTers argue that the Job Guarantee positions will be so low-paying that workers will not be incentivized to stay in them. But I’m not sure this is correct. Do we really understand how workers will react to a job they cannot lose? Will there be some people who prefer to work just enough to get by, showing up at the Job Guarantee office every now and then, working for a few weeks, then going back to their personal hobbies?” Comment: People will be able to lose their JG job.

There may be some people who will want to work just enough to get by. ”Yes. The Job Guarantee and the MMT Core: Part Seven, Dialogue With Warren Mosler. For example, Cullen objects to the full employment goal because he doesn't: “. . . believe the JG is the optimal usage of these monopoly powers and in fact could come at substantial long-term cost. 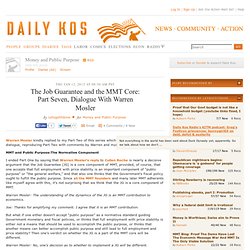 The Job Guarantee and the MMT Core: Part Eight, The JG Rate. Everyone agrees on the accompanying benefits however, which would would be a full “standard” package, including Medicare or something like it for all JG participants. But when it comes to the wage level itself there's now wide variation among some leading MMT practitioners. Here's Randy Wray, in an address he gave at a conference organized by Bill Mitchell in December, for example: The Job Guarantee and the MMT Core: Part Nine, The Wrong Goal? Spilling Electronic Ink Earlier in this series, here, here, and here, I discussed and critiqued an earlier post of Cullen Roche's expressing his criticisms of the Job Guarantee (JG) policy advocated by MMT economists, and contending that the JG proposal wasn't core to MMT. In the previous eight parts of this series I've argued against that view in the context of a blogosphere explosion on the subject.

Since the earlier post I addressed, however, Cullen has spilled a lot more electronic ink trying to make his case. Specifically, he's offered four new posts on the subject. In my next few posts I'll review these new efforts, beginning with his conversation with Warren Mosler. The Job Guarantee and the MMT Core: Part Ten – A 180 Mic Check? Cullen Roche continued his attack on the JG and his critics with a post asking whether America really needs to do a 180?

I see the post as a set of distractions and straw man arguments that misconstrue the positions of his critics. The post quotes no one and constructs their positions fictionally without any documentation. A Drastic Overhaul? Who Said Anything About That? The Job Guarantee and the MMT Core: Part Eleven, Price Anchor or Price Buoy?

Is the JG a Price Anchor? More on Cullen Roche's claims about the JG, this time a discussion of his price anchor vs. price buoy post. Let's begin with: ”. . . This is right in theory and entirely unproven in reality. . . . with regards to the price stability issue, the term “price anchor” is misleading as it gives the impression that the JG can serve as a highly effective way to contain inflation over the course of the business cycle . . . More likely, the JG would serve as a good deflation fighter and only a “soft ceiling” (per Warren) or marginally better inflation fighter than what we have today . . . .”

This is not inevitable, but is one possible response to the widespread mechanization of production that is likely to occur in coming decades. More Jigging – JG vs JIG. Market Mythology Underlying Criticism of the JG. The JIG Promotes Freedom. How modern is ‘modern monetary theory’? « Comments on Global Political Economy. Monetary Theory, Crony Capitalism and the Tea Party - US Business News Blog. The Trouble with a Job Guarantee - US Business News Blog. What’s MMT About Anyway and is the Job Guarantee Crucial to the Project?

John Carney clarified his stance on the MMT JG. On the Market Evalution of Productiveness. Question for John Carney wrt one of his objections to the JG. From the comments — Scott Fulwiller on the JG and inflation. The Trouble with Carney’s J.G Analysis « lowerleftlimit. The Great Debate©: The Job Guarantee Brouhaha. Hugo Heden and John Lounsbury — The Job Guarantee Brouhaha. Can the Government Guarantee Everyone a Job? - US Business News Blog. Malcolm Sawyer and government as employer of last resort. « The Jefferson Tree. MMT and the Jobs Guarantee « The Traders Crucible. THE EVOLUTION OF MMT…. Cullen Roche on goals and critera. Warren Mosler comments. Scott Fullwiler clarifies his position. FLASH — Warren Mosler calls JG optional for MMT! Beowulf comments on the employment mandate.

WARREN AND I DISCUSS THE JOB GUARANTEE. –Why Modern Monetary Theory’s Employer of Last Resort is a bad idea. « #Monetary Sovereignty – Mitchell. Why do ELR proponents always advocate public sector type work? Employer of Last Resort, buffer stocks and price anchors. 3spoken: Job Guarantee - it's really not that difficult. Keeping the JG during a boom and private sector business formation. My comments on MMT's job guarantee idea. Will MMT Become Part of the Problem? Great Leap Forward » THE JOB GUARANTEE: FINALLY MOVING BEYOND THEORY TO IMPLEMENTATION. Should a Job Guarantee program be permanent? MMT is biased towards anti-crony. Whatever – its either employment or unemployment buffer stocks. Back to William Beveridge requires a commitment to true full employment. Boondoggling and leaf-raking …