Let’s Get It Right: Using Correct Pronouns and Names. Top 20 tips for how business can support its LGBT workforce. The idea that LGBT inclusion is a non-issue, something that doesn't need to be dealt with, is widespread within business. 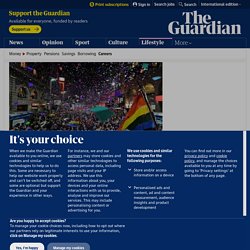 Many are the leaders who stick their heads in the sand, ignoring the matter altogether and consequently harming the trust, growth and reputation of their business. Every day we hear of homophobic abuse in the workplace, cementing the mistrust in business support for LGBT people. This week Californian lesbian councillor Jovanka Beckles was called "filth" during a council meeting, only to be told she had herself to blame. Here in the UK, Lib Dem councillor Sam Phripp left his position after experiencing homophobic bullying from fellow politicians. How To Be An LGBTQ Ally At Work. This post is co-authored by Brian Honigman and Michael Roderick We’ve made major strides in recent years towards equality, but LGBTQ entrepreneurs and employees still face many roadblocks to success in the professional world. 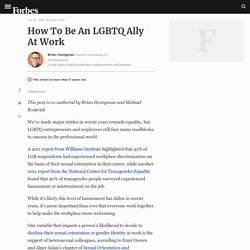 A 2011 report from Williams Institute highlighted that 42% of LGB respondents had experienced workplace discrimination on the basis of their sexual orientation in their career, while another 2011 report from the National Center for Transgender Equality found that 90% of transgender people surveyed experienced harassment or mistreatment on the job. 3 Ways to Be a Better LGBTQ Ally at Work. Whether you’re actively involved in activism in your free time or just attend annual pride parades, you totally support the LGBTQ community and everyone you know in it. 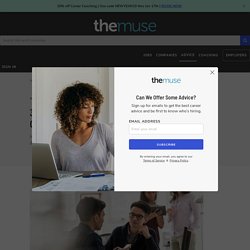 But how can you show that support in the office? Try to change HR policies? Keep a rainbow flag at your desk? Start a breakroom conversation with, “Hey, I know you’re gay and I totally support that!” (Please don’t do the last one.) Here’s the deal. Here are a few ways you, as an already amazing ally, can make that happen. Making the Business Case for LGBTQ2+ Inclusion. Jade Pichette Manager of Programs, Pride at Work Canada Each year we see increasing numbers of businesses arriving at Pride with their logos emblazoned with rainbows, but what about the other 364 days a year? 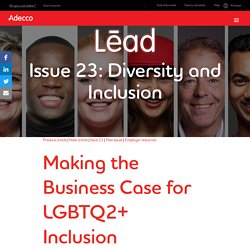 There is a shift in how employers are engaging members of gender, romantic and sexual minorities outside of Pride, and the benefit to having an inclusive space for LGBTQ2+ employees. Some employers have leapt into working with the community, usually due to dedicated openly LGBTQ2+1 employees, while others have been a bit more hesitant. It is time for organizations to realize that LGBTQ2+ inclusion is not just the right thing to do, but that it is what companies need to do in order to thrive in the competitive marketplace. The Law Canada has been on the forefront of LGBTQ2+ rights on an international stage. (103) Transgender job fair a possible first in Canada. (103) Trudeau's historic apology to LGBT communities.

(103) Equal rights for LGBT+ in the workplace. (103) South Africa LGBTQ Face Exclusion in Employment. Labour Research Service South Africa. Discrimination and violence against people of diverse sexual orientation and gender identity is a serious problem around the world, and South Africa is not immune despite our progressive laws. 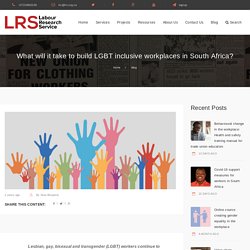 Lesbian, gay, bisexual and transgender (LGBT) workers face discrimination in the labour market throughout their employment cycle. Some common challenges for LGBT workers include: South africa global workplace briefing 2018. LGBT Workplace Issues: Why the majority of LGBT workers still hide their identity at work. After the Supreme Court ruled in 2015 that marriage is a right guaranteed to same-sex couples, many believed the largest battle for LGBT rights had been won. 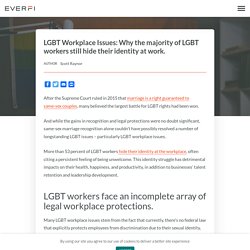 And while the gains in recognition and legal protections were no doubt significant, same-sex marriage recognition alone couldn’t have possibly resolved a number of longstanding LGBT issues – particularly LGBT workplace issues. Hilarious And Heartbreaking Lessons From 3,000 Coming-Out Stories. (97) History of LGBT rights in the UK: A long road to equality. (97) Guilty Of His Homosexuality. Pride 2019: LGBTQ Employees On Workplace Discrimination. (97) LGBTQ Diversity and Inclusion within the Workplace.

(97) LGBT experiences at work. (97) Challenges for LGBT people in the workplace. (97) LGBTQ in the Workplace. India’s First Ever LGBTQ Job Fair To Make Workplaces Safer & Inclusive. Growing up as a LGBTIQ kid in India is a very isolating and difficult experience. 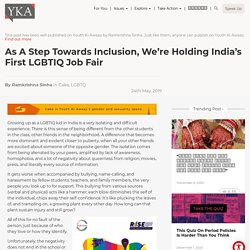 There is this sense of being different from the other students in the class, other friends in the neighborhood. Supreme Court decriminalises Section 377: All you need to know. NEW DELHI: In a historic judgement, the Supreme Court (SC) on Thursday ruled that consensual adult gay sex is not a crime saying sexual orientation is natural and people have no control on it. 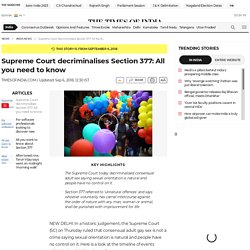 Here is a look at the timeline of events which led to this historic verdict - * Time 12:25 PM, September 6 2018, gay sex stands decriminalised. All five judges signed the verdict. Homosexuality gets legal approval and recognition. India INClusive: LGBTQ+ Inclusion At The Workplace Still A Work-in-progress. Most companies still seem to hire transgender people without fully Understanding what it means to be us: Harsha Hayathi, technical analyst, ANZImage: Pankaj Sethia It was August 2018, a month before the Supreme Court (SC) scrapped Section 377, a colonial-era ban on gay sex. 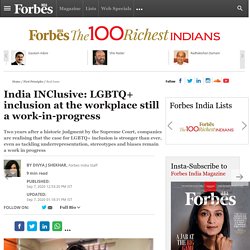 Harsha Hayathi went up on stage at an inclusion seminar organised by her financial services company ANZ in Bengaluru, and mustering all the courage she could, said, “I am Hayathi. Though I was not assigned female at birth, I identify as a woman. Some women have short hair, I am that woman. Some women have husky voices, I am that woman. LGBTQ: More than just letters - Canadian Underwriter Canadian Underwriter. A growing number of countries now recognize same-sex marriage and civil partnerships. 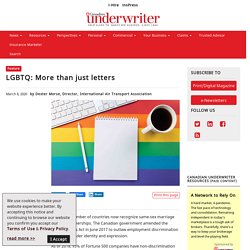 The Canadian government amended the Human Rights Act in June 2017 to outlaw employment discrimination based on gender identity and expression. As of 2018, 93% of Fortune 500 companies have non-discrimination policies in place that include sexual orientation. Eighty-five percent have non-discrimination policies that include gender identity. Many companies also provide other benefits (49% include domestic partner benefits and 62% include transgender-inclusive benefits). One-third of Canadians don’t see their work as LGBTQ inclusive: study. Jann Lee | July 27, 2016 Employers can still do more to include and support lesbian and gay employees in the workplace, according to a new study commissioned by Telus.

The survey of 814 Canadians (half of whom identified as lesbian, gay, bisexual, transgender or queer) reveals that about one-third of respondents don’t find their workplace safe and inclusive for lesbian and gay employees, while 45 per cent echoed the same opinion in regards to transgender employees. These results don’t surprise Colin Druhan, executive director of Pride at Work Canada. According to Druhan, “people don’t understand that a lot of the [discrimination] that happens in the workplace isn’t necessarily overt. . . . 10 companies tackling diversity and inclusion. Here are 10 companies whose diversity and inclusion initiatives in and outside the office have placed them atop their industries: Accenture The professional services giant is one of the world’s leaders when it comes to gender equality not just within the workplace but beyond it.

Accenture has appointed its first female chief executive officer, Julie Sweet, in September 2019 and currently boasts a global workforce consisting of 44% female. Last year, the company has hosted more than 240 International Women’s Day celebrations in 48 countries. Accenture also works with Girls Who Code, a non-profit organization that helps girls excel in science, technology, engineering, and math (STEM) subjects to help close the gender gap in technology careers. The Germany-based chemical company and the world’s largest chemical producer aims to increase the proportion of women in leadership positions to 30% worldwide.

Gay Line Wellington. This is a re-publication of a pamphlet by Full Spectrum Ltd. which produced it under a grant from the Legal Services Board. Full Spectrum Ltd was a private consultancy and training organisation that provided workplace education for organisations wishing to create inclusive environments for their lesbian, gay and bisexual (lgb) employees in New Zealand and Australia. While Full Spectrum Ltd. made every effort to ensure that this information is as legally accurate as possible, it is neither exhaustive nor should it be regarded as legal advice. If you are unsure, please contact your lawyer. LGBTQ Australians Still Not Comfortable Being Themselves at Work, Report Reveals. Rawpixel via Unsplash. Why Global Citizens Should Care Everybody deserves to feel safe at work. LGBTQ people around the world are still facing shocking levels of hate and discrimination.

Global Citizen works to promote diversity, acceptance, and tolerance for all. Discrimination at work. The Equality Act 2010 protects lesbian, gay, bi and trans people from direct discrimination, indirect discrimination, harassment and victimisation at work. Workplace Allies programme. At Stonewall the safety of our staff, the people we support and work with always comes first. Read our coronavirus update. The Stonewall one-day Workplace Allies programme gives non-LGBT individuals the opportunity to explore what it means to be an ally and the space to identify how they are going to create an inclusive environment for everyone. What the programme offers. LGBTQ+ voices: Learning from lived experiences. In landmark case, Supreme Court rules LGBTQ workers are protected from job discrimination.

The Supreme Court ruled Monday that existing federal law forbids job discrimination on the basis of sexual orientation or transgender status, a major victory for advocates of gay rights and for the nascent transgender rights movement — and a surprising one from an increasingly conservative court. By a vote of 6-3, the court said Title VII of the Civil Rights Act of 1964, which makes it illegal for employers to discriminate because of a person's sex, among other factors, also covers sexual orientation and transgender status. It upheld rulings from lower courts that said sexual orientation discrimination was a form of sex discrimination. Equally surprising was that the decision was written by President Donald Trump's first Supreme Court appointee, Neil Gorsuch, who was joined by Chief Justice John Roberts and the court's four more liberal members to form a majority.

Even with ruling, workplace still unequal for LGBTQ workers. Even with this week’s Supreme Court ruling, the workplace will be far from equal for lesbian, gay, bisexual and transgender Americans. While the nation’s highest court says you can’t be fired for your sexual orientation or gender identity under the Civil Rights Act of 1964, there are still gaps. For instance, the federal law doesn’t protect those who work at businesses with fewer than 15 workers. LGBTQUnionGuide. 5 Ways to Create Gender Inclusive Workplace. Lesbian, Gay, Bisexual, and Transgender Workplace Issues: Quick Take.