Blssummary detroit. How Detroit Is Faring on Jobs, Crime, Housing. The Detroit skyline is shown along the Detroit River. 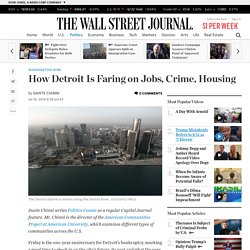 Associated Press Dante Chinni writes Politics Counts as a regular Capital Journal feature. Mr. Chinni is the director of the American Communities Project at American University, which examines different types of communities across the U.S. Friday is the one-year anniversary for Detroit’s bankruptcy, marking a good time to check in on the city’s future, its past and what the saga all means for other struggling big cities.

In truth, it is far too early for a serious analysis of the meaning of the bankruptcy, which is still unwinding with an August trial date looming. But when Detroit formally declared itself insolvent last year, the impact on that move on the city’s psychology and fragile economic state were real questions. Unemployment. With court's approval, Detroit emerges from bankruptcy. Detroit emerged Friday from the nation’s largest municipal bankruptcy with a life line as it seeks to recover from an ocean of debt and mismanagement that threatened to drown the onetime symbol of U.S. industrial might. 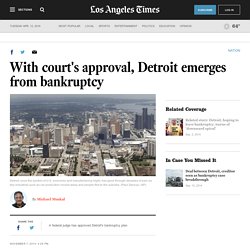 The court approval of the city’s bankruptcy exit plan ends a painful chapter in Detroit history and opens new challenges as it grapples with urban blight, population flight and the decay of businesses. The decision also reaches beyond Detroit’s borders, affecting bond markets, touching on how much pension protection retired city workers can expect if their city goes bankrupt and offering a blueprint for how future municipal bankruptcies can be handled, experts said. Detroit Bankruptcy Judge Steven Rhodes announced Friday that he had accepted the agreement negotiated by city and state officials as well as lawyers representing 100,000 creditors owed a staggering $18.5 billion. “What happened in Detroit must never happen again,” he said. 'A Crime': Groups Say Detroit Bankruptcy Plan Benefits Rich, Attacks Working People. A group of Detroit residents is condemning the city's newly-approved restructuring plan to exit bankruptcy as a deal that will further benefit the wealthy and corporate class while hurting working people. 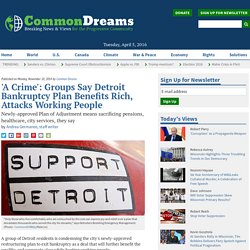 As Democracy Now! Reported Monday: A Detroit judge has approved the city’s effort to restructure finances and shed around $7 billion in debt under its bankruptcy filing last year. The plan includes cuts to retiree pensions for city workers and around $660 million in funding from state and private sources. For Detroit Retirees, Bankruptcy Still Part of Daily Life. For City of Detroit retirees, the changes brought by bankruptcy are measured in the cuts they’ve taken to monthly pension checks and health care benefits. 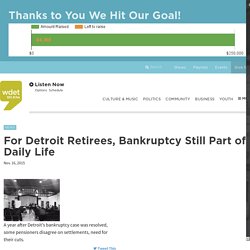 Nearly a year after the case’s resolution, some of them are recalling the bankruptcy proceedings and what the case has meant to their lives. Shirley Lightsey, president of the Detroit Retired City Employees Association, had a seat at the negotiating table during the bankruptcy proceedings. As one of about 20,000 city retirees affected by Detroit’s bankruptcy, Lightsey worked for Detroit’s Water and Sewerage Department for three decades.

She says, as an employee, she never doubted the security of the city’s pension system. “You were told that you were going to have a pension. Sandra Svoboda But decades of Detroit’s fiscal instability threatened that guarantee. For general service retirees, like Lightsey, the settlement translated to a 4.5 percent reduction in each monthly pension check. Annamarie Sysling. Detroit bankruptcy plan includes deep pension cuts. Detroit's plan to emerge from bankruptcy this year largely hinges on significant cuts to city workers' pensions and retiree health benefits — actions vehemently fought by public employee unions — as well as decreased payments to bondholders, according to a blueprint filed Friday to restructure the city's $18-billion debt. 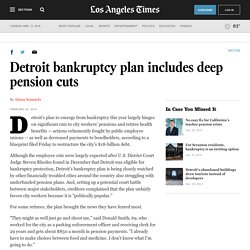 Although the employee cuts were largely expected after U.S. District Court Judge Steven Rhodes found in December that Detroit was eligible for bankruptcy protection, Detroit's bankruptcy plan is being closely watched by other financially troubled cities around the country also struggling with underfunded pension plans. And, setting up a potential court battle between major stakeholders, creditors complained that the plan unfairly favors city workers because it is "politically popular. " For some retirees, the plan brought the news they have feared most. The city says pension plans are underfunded by $3.5 billion, though unions dispute that number. Michigan Gov. A few retirees, workers still fighting Detroit bankruptcy plan. A small group of Detroit city retirees and active employees have banded together in a long-shot bid to overturn the city's sweeping bankruptcy plan. 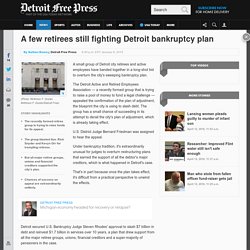 The Detroit Active and Retired Employees Association — a recently formed group that is trying to raise a pool of money to fund a legal challenge — appealed the confirmation of the plan of adjustment, the blueprint the city is using to slash debt. The group has a small chance of succeeding in its attempt to derail the city's plan of adjustment, which is already taking effect. U.S. District Judge Bernard Friedman was assigned to hear the appeal. Detroit: Ruin and Renewal. Lack of jobs hinders post-bankruptcy Detroit. Mayor Mike Duggan has made rebuilding the population and creating jobs and training programs one of Detroit's priorities now that the city is out of bankruptcy. 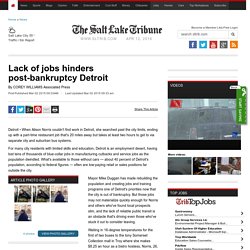 But those jobs may not materialize quickly enough for Norris and others who've found local prospects slim, and the lack of reliable public transit is an obstacle that's driving even those who've stuck it out to consider leaving. Waiting in 16-degree temperatures for the first of two buses to the tony Somerset Collection mall in Troy where she makes $8.25 an hour as a bistro hostess, Norris, 26, said there are no jobs in Detroit. "If it's no jobs, then why stay in the city? " said Norris. "There is nothing here. " The city's unemployment rate, which hit 25 percent in 2009, stood at 14.9 percent last year, state figures show, compared to a regional rate below 7 percent. More than 228,000 Detroit residents commute beyond the city limits, while only about 115,000 people who live in Detroit also work in the city, SEMCOG says.