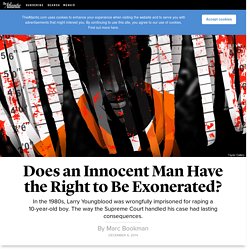 The Arizona Daily Star ran a brief item on the accident but never mentioned Leon’s background; the press seemed unaware that he had been in the middle of Tucson’s biggest legal scandal for the past two decades. There was a good reason the media hadn’t recognized Leon’s name: Over the years, he’d been referred to vaguely as “the victim” or under the pseudonym “Paul”; the U.S.

Supreme Court had called him “David L.” But concealing his identity hadn’t prevented the young man from suffering untold damage. Weeks after the train accident, the autopsy revealed that he had been drunk at the time of his death, a fact that surely surprised no one who knew him. By the time David Leon was in the fifth grade, he was already struggling with emotional problems. The pastor’s wife called David’s mother later that night. That was all they needed. Why Innocent People Plead Guilty by Jed S. Rakoff. The criminal justice system in the United States today bears little relationship to what the Founding Fathers contemplated, what the movies and television portray, or what the average American believes.

To the Founding Fathers, the critical element in the system was the jury trial, which served not only as a truth-seeking mechanism and a means of achieving fairness, but also as a shield against tyranny. As Thomas Jefferson famously said, “I consider [trial by jury] as the only anchor ever yet imagined by man, by which a government can be held to the principles of its constitution.” 0XCFLtr.jpeg (JPEG Image, 3264 × 1836 pixels) - Scaled (31%) Tumblr_mzoey1b4aj1qdlh1io1_400.gif (GIF Image, 400 × 358 pixels) Map Your Mind - Whose #BRAINCHILD are you? Map Your Mind shows which areas of the brain are associated with particular attributes or behaviors, based on the latest scientific research. 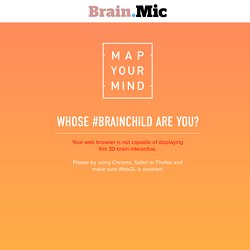 The data that powers Map Your Mind comes from peer-reviewed, scientific studies published in reputable academic journals over the last decade. Many of the studies employ fMRI technology to measure blood flow and areas of fluctuating activity in the brain. A special thank you to Moran Cerf, Ph.D., a leading researcher in behavior, emotion and decision making at Northwestern University, and Kevin Weiner, a specialist in perception and cognition at Stanford's Vision & Perception Neuroscience Lab and the Institute for Applied Neuroscience, for their advice and guidance. How Racism Created America's Chinatowns. Last month, a San Francisco tour guide was caught in a racist rant about the city's Chinatown, berating residents for "eating turtles and frogs" and for not assimilating into American culture. 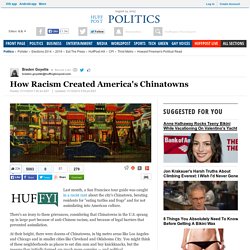 There's an irony to these grievances, considering that Chinatowns in the U.S. sprang up in large part because of anti-Chinese racism, and because of legal barriers that prevented assimilation. At their height, there were dozens of Chinatowns, in big metro areas like Los Angeles and Chicago and in smaller cities like Cleveland and Oklahoma City. Chattel — KEVIN HORAN. Standwood #2 Mandy #2 Jake #3. 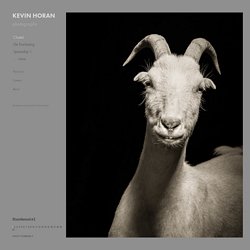 Costly public-records requests may threaten SPD plan for body cameras. Concerns about broad-reaching public-disclosure requests that officials say could cripple the city of Seattle financially and tie up employees for countless hours may result in the canceling of a plan to outfit Seattle police officers with body cameras. 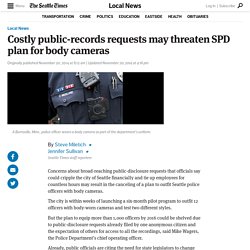 The city is within weeks of launching a six-month pilot program to outfit 12 officers with body-worn cameras and test two different styles. But the plan to equip more than 1,000 officers by 2016 could be shelved due to public-disclosure requests already filed by one anonymous citizen and the expectation of others for access to all the recordings, said Mike Wagers, the Police Department’s chief operating officer. Already, public officials are citing the need for state legislators to change the law, although a public-records advocate questions the necessity of that. He also wants all videos from patrol-car cameras and plans to seek copies of body-cam videos once police begin using them. Seattle police spokesman Sgt. An Experiment in Government Innovation—Legal Hackers in Residence. In the last two years, my office has been working with civic hackers—Code for DC, DC Legal Hackers, and others—and organizations like US ODI and the OpenGov Foundation to build open-source tools to make DC’s law more accessible. 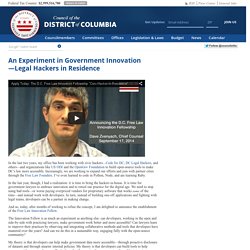 Increasingly, we are working to expand our efforts and join with partner cities through the Free Law Founders. I’ve even learned to code in Python, Node, and am learning Ruby. In the last year, though, I had a realization: it is time to bring the hackers in-house. It is time for government lawyers to embrace innovation and to retool our practice for the digital age. We need to stop using bad tools—or worse paying overpriced vendors for proprietary software that works some of the time—and instead work with developers. And so, today, after months of working to refine the concept, I am delighted to announce the establishment of the Free Law Innovation Fellow. If you are that person, please consider applying to be the first ever Free Law Innovation Fellow. 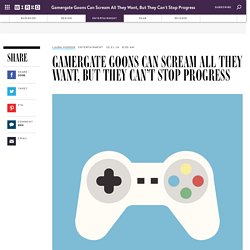 As anyone paying even tangential attention to videogames likely knows, the medium is in the throes of a misogynist backlash so virulent it often could be described as terrorism. In the past nine weeks, three female games professionals—Anita Sarkeesian, Brianna Wu, and Zoe Quinn—have been driven from their homes by death threats. Why It Makes Sense For Intel To Pull Ads From Gamasutra Over #GamerGate And Why It's Still The Wrong Move.

Most Popular Job By State [MAP] The Gender Games, Part 2: Videogames Meet Feminism. In my previous article, I tried to make sense of the “GamerGate” drama, which its detractors have described as a sexist male backlash against women in the videogame culture and which its supporters see as a pushback against cronyism and political correctness in the gaming media. 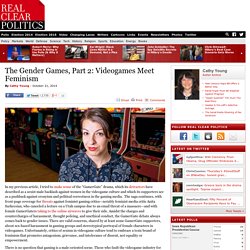 The saga continues, with front-page coverage for threats against feminist gaming critics—notably feminist media critic Anita Sarkeesian, who canceled a lecture on a Utah campus due to an email threat of a massacre—and with female GamerGaters taking to the online airwaves to give their side. Amidst the charges and countercharges of harassment, thought policing, and unethical conduct, the GamerGate debate always comes back to gender issues. There are valid concerns, shared by at least some GamerGate supporters, about sex-based harassment in gaming groups and stereotypical portrayal of female characters in videogames. _Rosetta_NAVCAM_141018_D.jpg (JPEG Image, 1024 × 1024 pixels) - Scaled (97%) Ic1805nb_ederL.jpg (JPEG Image, 1800 × 1157 pixels) - Scaled (56%) Hawaii Lacks Hurricane Emergency Plan for Waikiki, Neighbor Islands. As two hurricane-strength storms approach Oahu, the city has no comprehensive emergency plan in place for the densely-populated, low-lying area of Waikiki, which could experience storm surges, high winds, flooding and flying debris, according to John Cummings, a spokesman for Honolulu’s Department of Emergency Management. 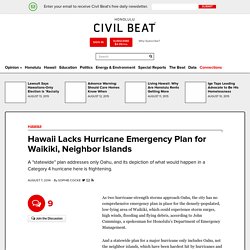 And a statewide plan for a major hurricane only includes Oahu, not the neighbor islands, which have been hardest hit by hurricanes and tropical storms in past decades. As of Wednesday evening, Hurricane Iselle was approaching the Big Island with maximum sustained winds of 90 miles per hour, making it a Category 1 hurricane. The Big Island could begin experiencing high winds Thursday afternoon and hurricane conditions later in the evening.

Maui, Kauai and Oahu could experience tropical storm conditions starting Thursday night. View of Waikiki from Diamond Head. PF Bentley/Civil Beat Federal and city officials said that to their knowledge there is no available. LUXvEZf.jpg (JPEG Image, 500 × 437 pixels) White poverty exists, ignored. In a small office on the first floor of the Owsley County Court House, across the street from the Hometown Cafe, Johnny Logsdon, chief of the two-man police department, is talking with a reporter about life in this town of 82 people in the hills of eastern Kentucky. Logsdon keeps his answers short. Wasn't expecting that. Untitled. Kansas City Chief safety Husain Abdullah did what most players do when they make an extraordinary play.

Abdullah, a 29-year-old veteran, had just intercepted a pass from New England Patriots quarterback Tom Brady and returned it for a touchdown. He then slid down on both knees in the end zone and put his head down in prayer. The move earned him a 15-yard unsportsmanlike conduct penalty. Religious celebrations aren't new to the NFL. They happen all the time.

The Pretense of Balanced Debate: Behind the Media’s Blackout of Antiwar Views. Click here to jump directly to Reed Richardson. Alter-reviews: Marcus Roberts’ twelve-piece band at The Appel Room at Jazz at Lincoln Center The Heath Brothers at Dizzy’s Club at Jazz at Lincoln Center Once Upon a Time in America at the New York Film Festival Marcus Roberts brought an impressive array of musicians with him to the Appel Room last weekend for a show he called Piano Masters of Melody. Civil Rights, Big Data, and Our Algorithmic Future. Kura Tawhiti Astrophotography - Album on Imgur. A-mother-in-jail-for-helping-her-daughter-have-an-abortion. Runners Take the Place of Models During Fashion Week. The models at the Oiselle fashion show in New York this week were the first to admit it: They were more at home on a running track than on a runway. They stepped barefoot onto the catwalk anyway, wearing sports bras and spandex, with ponytails and abdomens shredded neatly into sixths.

Instead of look books and go-sees, from which the waifs of Fashion Week are typically culled, they were cast based on their portfolios of race times and medals. To see the full article, subscribe here. An Unlikely Ballerina - The New Yorker. On a recent August afternoon, near Nineteenth Street, two young girls with blond hair pulled back in ponytails ran past me, one of them calling out, “Daddy, Daddy, I just saw Misty Copeland!” The tone of voice might as well have been used to announce a sighting of Katy Perry, or Snow White. A few steps later, I entered the tiny lobby of a building on Broadway, where an old electric fan was not quite keeping the doorman cool. A caged elevator took me up to the third floor, where I passed through a low-ceilinged hallway crowded with unlabelled posters of ballet greats, until I reached an expansive fluorescent-lit room with two walls of slightly warped mirrors and air-conditioning units sealed into the windows with black electrical tape.

But in cases involving gender, she said, the court has never fully embraced “the ability of women to decide for themselves what their destiny will be.” She said the court’s five-justice conservative majority, all men, did not understand the challenges women face in achieving authentic equality. Justice Ginsburg is not the only one who has sensed that cases involving gay people and women are on different trajectories. She dissented again from the bench in 2012 in Coleman v. Privacy and Data Security Harms - Concurring Opinions. I recently wrote a series of posts on LinkedIn exploring privacy and data security harms.

Hawaii Monitor: Fallen Apple Has Immediate Practical Consequences. The budget meltdown and administrative shakeup at the University of Hawaii’s Manoa campus have been very much in the news, but I doubt most people understand just how delicate — to use a polite euphemism — the immediate situation is in the wake of Chancellor Tom Apple’s imposition of an indefinite hiring freeze and the subsequent swirling rumors of his likely administrative demise. The practical problems created by the abrupt hiring freeze are dramatic and carry heavy downside risk for the campus. Morning Greetings! What's The Matter With CrossFit? The Best Broccoli of Your Life. November 10, 2008 | By Adam Roberts | 370 Comments. YhofOV8.jpg (JPEG Image, 500 × 500 pixels) How Long Does It Take Dell Online Support To Realize You’re Just Describing The Plot of Hackers?