Eyes of Rikkai Chapter 1: Echizen Ryoma vs The World, a prince of tennis fanfic. Disclaimer: All characters belong to Takeshi KonomiWarnings: Spoilers for the entire series and mature-ish languageNotes: I made some (a lot of) changes to the set up, but they're explained in the story. 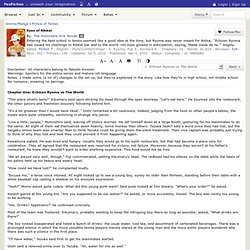 Like how they're in high school, not middle school. No romance, meaning no pairings. Chapter One: Echizen Ryoma vs The World "This place smells tasty! " Kikumaru said upon sticking his head through the open doorway. "It's a bit greasier than I would have liked…" Oishi remarked a bit cautiously. "Live a little, senpai," Momoshiro said, waving off Oishi's worries. Kawamura sighed. "We all played very well, though," Fuji commiserated, patting Kikumaru's head. "How could we have lost? " "Excuse me," a terse voice intoned. "Yeah? " Kaidoh glared at the young kid. "Yes. Most of the team was flustered.

The boy looked exasperated and listed a bunch of drinks: the usual water, iced tea, and assortment of carbonated beverages. "I'll have water," Tezuka said first to get his teammates started. A Blind need Chapter 1: SoalMate, a prince of tennis fanfic. He had been back in Japan for a day and had yet tell his friends and boyfriend. 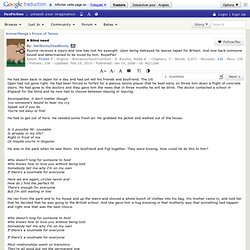 The US Open had not gone right. He had been forced to forfeit for a jealous tennis player that he beat early on threw him down a flight of concrete stairs. He had gone to the doctors and they gave him the news that in three months he will be blind. The doctor contacted a school in England for the blind and he now had to choose between staying or leaving. Incompatible, it don't matter though'cos someone's bound to hear my crySpeak out if you doYou're not easy to find He had to get out of here. Is it possible Mr. Merlin's guide as to why you shouldn't be Voldemort Chapter 1: Prologue, a Merlin + Harry Potter Crossover fanfic. Silent Tears Chapter 1, a prince of tennis fanfic. A/N: Hello there! 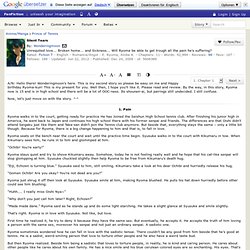 Wonderingmoon's here. This is my second story so please be easy on me and Happy birthday Ryoma-kun! This is my present for you. Well then, I hope you'll like it. Please read and review. Now, let's just move on with the story 1. Happy Chapter 1: Prologue, a prince of tennis fanfic. Happy The young girl with molten gold eyes and emerald green hair popped her head up from under the blankets. 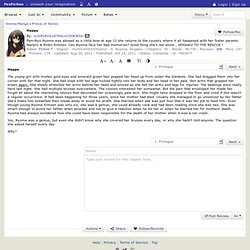 She had dragged them into her corner with her that night. She had slept with her legs tucked tightly into her body and her head in her pale, thin arms that gripped her knees again. She slowly stretched her arms behind her head and winced as she felt her arms and legs for injuries. The beatings were really hard last night. Yes, Ryoma was a genius, but even she didn't know why she covered her bruises every day, or why she hadn't told anyone. Tennis no Hime Chapter 1: Prologue, a prince of tennis fanfic. Heaven: Hi hi~ I'm Serika Ootori, but I go by Heaven because people call me Heaven. 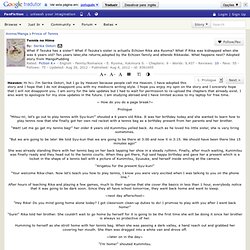 I have adopted this story and I hope that I do not disappoint you with my mediocre writing style. I hope you enjoy my spin on the story and I sincerely hope that I will not disappoint you. I am sorry for the late updates but I had to wait for permission to re-upload the chapters that already exist. I also want to apologize for my slow updates in the future. I am studying abroad and I have limited access to my laptop for free time. ~ How do you do a page break? Prologue "Mitsu-nii, let's go out to play tennis with Syu-kun! " Illusions, Truth, and the Ways of Equilateral Triangles, a prince of tennis fanfic. There was just something strange about receiving a rose unexpectedly. 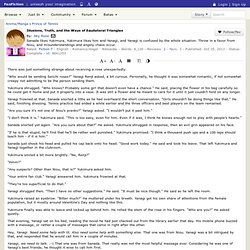 "Who would be sending Seiichi roses? " Yanagi Renji asked, a bit curious. Personally, he thought it was somewhat romantic, if not somewhat creepy not admitting to be the person sending them. Yukimura shrugged. "Who knows? Yanagi frowned at that. Synchronised Chapter 1: The Beginning, a prince of tennis fanfic. A/N: I had to get this out of my head, or else I will forget it == ... 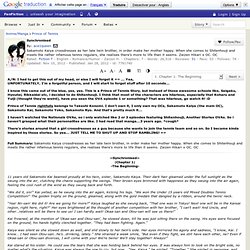 Yea, UNFORTUNATELY, I'm a forgetful person, and I will start to forget stuff after 10 seconds... I know this came out of the blue, yes, yes. This is a Prince of Tennis Story, but instead of those awesome schools like, Seigaku, Hyoutei, Rikkaidai etc, i decided to do Shitenhouji. I think that most of the characters are hilarious, especially that Koharu and Yuiji (thought they're weird), have you seen the OVA episode 1 or something? That was hilarious, go watch it! Words, a prince of tennis fanfic. Author's Notes: ShinRyo! 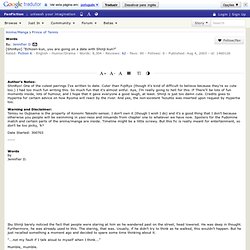 One of the cutest pairings I've written to date. Cuter than FujiRyo (though it's kind of difficult to believe because they're so cute too.) I had too much fun writing this. So much fun that it's almost sinful. A Special Kind of Love Chapter 1: Normal Day, a prince of tennis fanfic. A Special Kind of Love by Calator (formerly lustbader064) Disclaimer: I don't own Prince of Tennis. 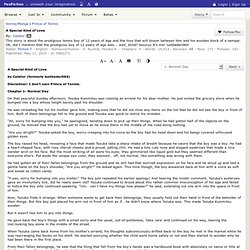 Chapter 1- Normal Day On that peaceful Sunday afternoon, Tezuka Kunimitsu was running an errand for his dear mother. He just exited the grocery store when he bumped into a boy whose height barely past his shoulder. He was rereading the list his mother gave him, making sure that he did not miss any items on the list that he did not see the boy in front of him. "Ah, sorry for bumping into you," he apologized, bending down to pick up their things. "Are you alright? " The boy raised his head, revealing a face that made Tezuka take a sharp intake of breath because he swore that the boy was a boy.

He had gotten all of their fallen belongings from the ground and he still had that worried expression on his face and he stood up and laid a gentle hand on the boy's shoulder, "Are you alright? " "Y-yes, sorry for bumping into you mister," The boy just repeated his earlier apology! "Oya! I'm the Coach Chapter 1: Prologue, a prince of tennis fanfic. Author's Note: Hey, guys! 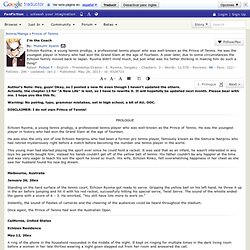 Okay, so I posted a new fic even though I haven't updated the others. Actually, the chapter 13 for "A New Life" is lost, so I have to rewrite it. It will hopefully be updated next month. Please bear with me. I hope you like this fic. May Angels Lead You In Chapter 1, a prince of tennis fanfic. Chapter I "Ne, Chibisuke. " A boy about six looked over at his older half-brother. His golden-olive eyes met his brother's darker brown and the boy blinked slowly in the sunlight. "Yeah? " it came as a quiet, melodic question. "Do... do you think there is a place for everyone in the world?

" Troublemaker Chapter 1: Prologue, a prince of tennis fanfic. Troublemaker Chapter 1 Summary: Atobe Keigo's younger 12 year old younger half brother is coming to Japan and with him a maelstrom of trouble. As much as the Seigaku regulars want to teach the brat a lesson they couldn't because he just might be their ticket to the Nationals with his extraordinary tennis skills. Warning: This story was once by Sephony now adopted by Ore-sama. Verification, a prince of tennis fanfic. Title: Verification By: AtobeLover Summary: A very… special study of Inui's, based on just three pertinent questions, shows that Atobe and Ryoma are soulmates. Ryoma, who has nothing to do, tries verifying it (and giving his senpai a big shock at the same time). The Lucky Jerk Chapter 1, a prince of tennis fanfic. Title: The Lucky Jerk By: AtobeLover Summary: Ryoma's in love, and the Seigaku team won't rest until they find out the identity of the lucky jerk... and in the process, Ryoma's paired with almost everyone on the Seigaku team except the real guy, who isn't even on it.

Rated: T Disclaimer: I do not own Prince Of Tennis. The whole thing (genius, if you ask me, for creating people like Ryoma and Tezuka and ATOBE...) belongs to Takeshi Konomi. US Tournament? Chapter 1, a prince of tennis fanfic. US Tournament Summary: Ryoma Echizen is well-known in America for being the prince of tennis because of winning 4 consecutive junior US tournaments and reaching the finals and winning at the previous US Open in which he was the youngest competitor at both. But, he wasn't at all that well-known in Japan and his team mates in Seigaku and rivals from other schools doesn't know a thing about it except for their captain and coach. What if they went to America for a tournament and word of the Prince of Tennis staying in America for a tournament is spreading? What if people, or rather, what if the regulars find out that their little Ochibi is the Prince of Tennis? New characters might appear. Disclaimer: I am NOT Konomi Takeshi and therefore Prince for Tennis IS NOT mine.

Legend:Bold EnglishItalicthought/ emphasize"quotation"said I&Bthought in Englisha/n: author's note a/n: Here's the thing… Pretend that they don't know Ryoga Echizen. Extreme Streets Tennis Chapter 1: Dare to Play, a prince of tennis fanfic. Extreme Streets Tennis Hello! So this story has been knocking around in my brain for several days now, and no matter what I do, every time I close my eyes – the idea comes back.

A/N: Sorry for not posting anything for such a long time. Guilty as charged! This is my longest one-shot so far, so I hope you'll enjoy! :) Constructive comments are good, Compliments are the best, and flames burn. Prodigy, a prince of tennis fanfic. DISCLAIMER: I would never let anyone steal my work if I ever became famous, just saying, so I am ever-so grateful to those authors that do. The Prince of Tennis does not belong to me in any way, but I do wish that it did. Double Fault Chapter 1: Part One: Not feeling well, a prince of tennis fanfic.