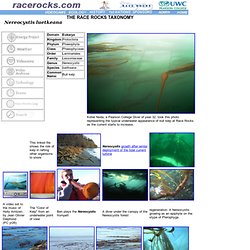 Plants consist of a long stipe (up to 36 m/118') attached to the ocean floor by a holdfast composed of numerous haptera (finger-like projections) and terminated above, on the ocean surface, by a single float from which a cluster of tightly branched smooth blades arise. The blades are long (up to 4 m/13') and narrow (usually less than 20 cm/8" wide). Overall, this species reminds us of a very large gothic brown onion of extraterrestrial origin. This form, commonly referred to as bull kelp, is attached subtidally but forms surface canopies throughout its distribution from Alaska to central California. At Race Rocks, all the islands are fringed by this species during the summer months. This means that the plant achieves its significant length in one growing season (most growth occurs between March and September). Ronald E. Nereocystis luetkeana. Seaweeds of Alaska. Laminaria. The name also refers to the use of this algae to dilate the cervix when induction of pregnancy is necessary. 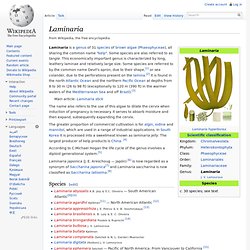 It serves to absorb moisture and then expand, subsequently expanding the cervix. The greater proportion of commercial cultivation is for algin, iodine and mannitol, which are used in a range of industrial applications. In South Korea it is processed into a sweetmeat known as laminaria jelly. The largest producer of kelp products is China. [4] According to C.Michael Hogan the life cycle of the genus involves a diploid generational system.[5] Laminaria japonica (J. 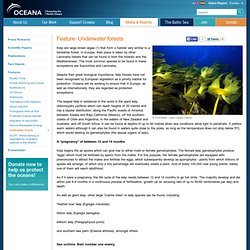 In Europe, their place is taken by other Laminaria forests that can be found in both the Atlantic and the Mediterranean. The most common species to be found in these ecosystems are Saccorhiza and Laminaria. Despite their great biological importance, kelp forests have not been recognised by European legislation as a priority habitat for protection. Oceana will be working to ensure that in Europe, as well as internationally, they are regarded as protected ecosystems. Laminaria hyperborea. Sargassum. Lines of Sargassum can stretch for miles along the ocean surface Close-up of Sargassum, showing the air bladders that help it stay afloat Sargassum is a genus of brown (class Phaeophyceae) macroalgae (seaweed) in the order Fucales. 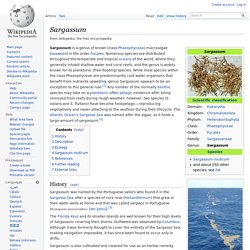 Numerous species are distributed throughout the temperate and tropical oceans of the world, where they generally inhabit shallow water and coral reefs, and the genus is widely known for its planktonic (free-floating) species. While most species within the class Phaeophyceae are predominantly cold water organisms that benefit from nutrients upwelling, genus Sargassum appears to be an exception to this general rule.[1] Any number of the normally benthic species may take on a planktonic often pelagic existence after being removed from reefs during rough weather; however, two species (S. natans and S. fluitans) have become holopelagic—reproducing vegetatively and never attaching to the seafloor during their lifecycle. Sargassumfish. Description[edit] Illustration of a sargassum fish. 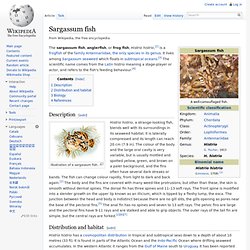 Histrio histrio, a strange-looking fish, blends well with its surroundings in its seaweed habitat. It is laterally compressed and its length can reach 20 cm (7.9 in). The colour of the body and the large oral cavity is very variable, but is usually mottled and spotted yellow, green, and brown on a paler background, and the fins often have several dark streaks or bands. The fish can change colour rapidly, from light to dark and back again.[2] The body and the fins are covered with many weed-like protrusions, but other than these, the skin is smooth without dermal spines. Histrio histro. Sargassum filipendula. Fucus. Fucus is a genus of brown algae found in the intertidal zones of rocky seashores almost throughout the world. 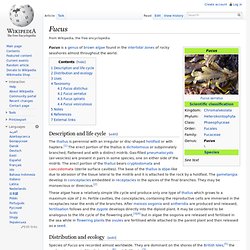 Description and life cycle[edit] These algae have a relatively simple life cycle and produce only one type of thallus which grows to a maximum size of 2 m. Fucus virsoides. Jadranski Bračić - Fucus virsoides. Brown algae. The Phaeophyceae or brown algae (singular: alga), is a large group of mostly marine multicellular algae, including many seaweeds of colder Northern Hemisphere waters. 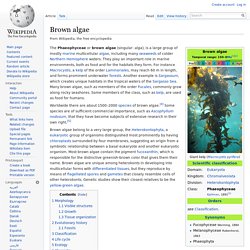 They play an important role in marine environments, both as food and for the habitats they form. For instance Macrocystis, a kelp of the order Laminariales, may reach 60 m in length, and forms prominent underwater forests. Another example is Sargassum, which creates unique habitats in the tropical waters of the Sargasso Sea. Many brown algae, such as members of the order Fucales, commonly grow along rocky seashores. Some members of the class, such as kelp, are used as food for humans. Worldwide there are about 1500–2000 species of brown algae.[4] Some species are of sufficient commercial importance, such as Ascophyllum nodosum, that they have become subjects of extensive research in their own right.[5] Morphology[edit] Regardless of size or form, two visible features set the Phaeophyceae apart from all other algae.