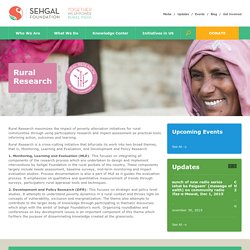 Rural Research is a cross-cutting initiative that bifurcate its work into two broad themes, that is, Monitoring, Learning and Evaluation, and Development and Policy Research 1. Monitoring, Learning and Evaluation (MLE): This focuses on integrating all components of the research process which are undertaken to design and implement interventions by Sehgal Foundation in the rural pockets of the country. These components largely include needs assessment, baseline surveys, mid-term monitoring and impact evaluation studies. Process documentation is also a part of MLE as it guides the evaluation process. 2. 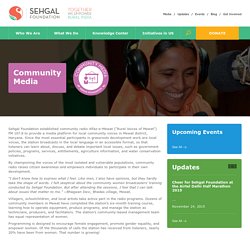 Since the most essential participants in grassroots development work are local voices, the station broadcasts in the local language in an accessible format, so that listeners can learn about, discuss, and debate important local issues, such as government policies, programs, services, entitlements, agriculture information, and water conservation initiatives. By championing the voices of the most isolated and vulnerable populations, community radio raises citizen awareness and empowers individuals to participate in their own development. “I don’t know how to express what I feel. Like men, I also have opinions, but they hardly take the shape of words. I felt skeptical about the community women broadcasters’ training conducted by Sehgal Foundation. *Data figures until December 2014. Water Management programs in India. Understanding that water affects every aspect of village life and is essential for health, education, and farming, the foundation team works with communities to secure adequate local water supplies, improve sanitation, and manage wastewater in schools, homes, and throughout the community. 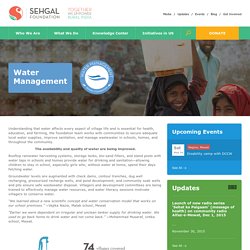 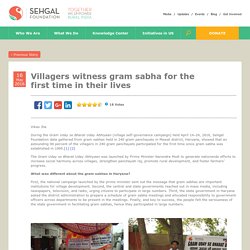 What was different about the gram sabhas in Haryana? Good Rural Development NGO in India. Good Rural Governance provides individual citizens and the leaders of village-level institutions with knowledge, skills, and confidence to become informed active self-advocates for the development of their communities. 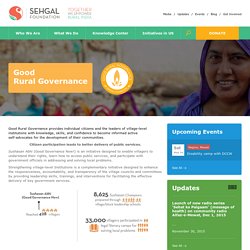 Citizen participation leads to better delivery of public services. Sushasan Abhi (Good Governance Now!) Is an initiative designed to enable villagers to understand their rights, learn how to access public services, and participate with government officials in addressing and solving local problems. Strengthening village-level Institutions is a complementary initiative designed to enhance the responsiveness, accountability, and transparency of the village councils and committees by providing leadership skills, trainings, and interventions for facilitating the effective delivery of key government services. *Data figures until December 2014. “I work as a Sushasan Champion in my village. Agricultural Development Programme India –Sehgal Foundation. Since farmers depend on agriculture for their livelihood, the foundation team works to help them identify and utilize sustainable agriculture practices to meet the increasing demand for food. 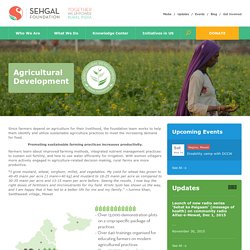 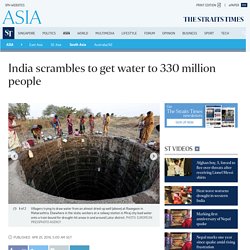 Some 330 million people in 256 of the nation's 664 districts have been affected, the government told the Supreme Court last week. So far, 10 of India's 29 states have declared themselves in a state of drought, after two years of below-average monsoon rains. Water trains are running daily to deliver water to parts of Maharashtra, while Odisha state has extended summer vacations for schools and deployed more than 1,000 tankers to supply water.

In the southern state of Telangana, the government has promised to continue supplying drinking water to affected households until the monsoon rains in June. "The drinking water supply is the biggest concern... because there is no rain, the water table has come down, and we are losing tube wells," said Mr Pradipta Kumar Mohapatra, the special relief commissioner for Odisha, where temperatures shot past 45 deg C this month. Get ready to harvest super monsoon or miss the bus, writes Kiran Bedi. Sehgal Foundation. 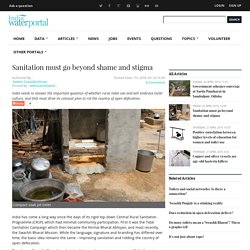 First it was the Total Sanitation Campaign which then became the Nirmal Bharat Abhiyan, and most recently, the Swachh Bharat Mission. While the language, signature and branding has differed over time, the basic idea remains the same – improving sanitation and ridding the country of open defecation. The phrase ‘Swachh Bharat’ rarely takes listeners by surprise any more. While there is no denying that the concept of a ‘Swachh Bharat’ has been drummed into the country’s collective psyche over the last year or so, how to go about achieving it eludes many practitioners and policy makers alike. No ‘Adarsh’ without ‘Swachh’ Toilet coverage in every household is still a long way off Achieving an open-defecation free India is easier said than done. Census 2011 indicates that nearly 70% of all Indians live away from cities. Evoking action. Social justice calling:- S M Sehgal Foundation. Do you know about social welfare laws in India? 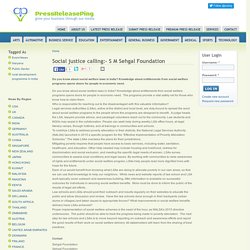 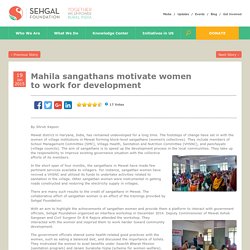 The footsteps of change have set in with the women of village institutions in Mewat forming block-level sangathans (women’s collectives). They include members of School Management Committee (SMC), Village Health, Sanitation and Nutrition Committee (VHSNC), and panchayats (village councils). The aim of sangathans is to speed up the development process in the local communities. They take up the responsibility to improve existing governance situation with the collecti ve efforts of its members. Promoting Good Governance in 2.5 lakhs Gram Panchayats. By Vikas Jha Good governance at the grassroots has new momentum in India with the announcement of Saansad Adarsh Gram Yojana (SAGY), the Member of Parliament Model Village Program. The objectives of SAGY are “to trigger processes which lead to holistic development of identified Gram Panchayats (GPs), to substantially improve the standard and quality of life of all sections of the population . . . to generate models of local level development and effective local governance . . . , and to nurture the identified Adarsh Grams as schools of local development for the other Gram Panchayats.”

Social components of SAGY emphasize good governance, and SAGY guidelines list a number of related activities. Rural India is getting ready for implementation of SAGY in 795 Gram Panchayats (GPs) in first phase and it will cover 2385 GPs by 2019 as one Member of Parliament adopts 3 GPs in his / her tenure of 5 years. It is good that SAGY has begun in selected Gram Panchayats. Living with Climate Change. Sumit Vij This blog series is a part of assorted writings for a two-year research project titled “Living with Climate Change” (LCC) funded by the Social Sciences and Humanities Research Council, Canada. Kites to celebrate freedom.

The people of India recently celebrated the 67th Independence Day, an important holiday for all of us that work for the empowerment of rural communities in. The celebrations highlight that every citizen’s participation in government affairs is valuable for sustaining a vibrant democracy. Kites fly high on this day. President Pranab Mukherjee gave a speech to the nation on the eve of Independence Day 2013. To development workers, the speech seemed to draw connections between the celebration of democracy and rural development. When the President spoke of India, there were moments when the concerns of Bharat (marginalized rural India) loomed large. School and health committees so that they can plan village development and access the necessary resources. We have selected five important topics from the President’s speech and will reflect on their relationship to the work we conduct with rural communities. Can Legal Aid help alleviate rural poverty in India?

By Jane Schukoske, CEO Though many people do not know about it, there is a law in India that provides for marginalized groups to receive free legal aid. That includes legal awareness training as well as legal aid for disputes in court, legal aid for disputes to be negotiated in Lok Adalats (People’s Courts, a forum to promote voluntary settlement of cases out of court). The law is the Legal Services Authority Act 1987. Under it, each district in India has a Legal Services Authority (LSA) required to organize legal aid camps, among other activities. Learning From Shodh Yatra (Research Travel): In Search of Grassroots Innovations. By Satoko Okamoto, Visiting Scientist, Rural Research Centre Grassroots innovations are solutions for the problems of the common people, created by the common people.

These innovations typically evolve outside formal R&D conduits and they are often inexpensive and easier to maintain. Climate Change and Its Impacts: Observations by the Villagers in Mewat. Micro Planning: A tool to empower people. By Anjali Godyal-Group Leader, Projects Micro-planning is a comprehensive planning approach where in the community prepares development plans themselves considering the priority needs of the village.

The Future of Legal Aid in India: Lessons from Mewat, Haryana. Can Legal Aid help alleviate rural poverty in India? Living with Climate Change (Blog series: Write-up 2) Sumit Vij “If you have knowledge, let others light their candles with it” — Winston Churchill Continuing from the last blog entry, Living with Climate Change (LCC) Project at Sehgal Foundation has made progress in terms of site selection.

I visited the Bundelkhand region in Central India in mid August 2013. Bundelkhand, a semi-arid geographical region lies between the Indo-Gangetic plain to the north and the Vindhyachal range to the south and is divided into 6 districts of Madhya Pradesh & 7 districts of Uttar Pradesh. It is a hard rock area with limited or inadequate ground water resources. Climate Change and Its Impacts: Observations by the Villagers in Mewat.

Micro Planning: A tool to empower people. Sehgal Foundation. Untitled. Community learning: building trust to discuss issues that deeply matter. By Arti Manchanda Grover Learning from the community is key to Sehgal Foundation’s mission for strengthening community-led development. Our journey with participatory learning at community radio Alfaz-e-Mewat FM 107.8 started in 2013, when a Bangalore-based organization, Maraa, introduced the radio team to the Community Learning Program supported by Commonwealth of Learning, Canada. Orientation to the Community Learning Program prepared the team to see the benefits of the approach and implement it within communities reached by the station located in Ghaghas, Mewat district, Haryana.

Sehgal Foundation: Together We Empower