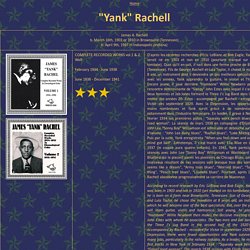 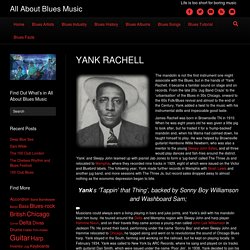 From the late 20s ‘Jug Band Craze’ to the ‘urbanisation’ of the Blues in 30s Chicago, onward to the 60s Folk/Blues revival and almost to the end of the Century, Yank added a twist to the music with his instrumental skills and impeccable good taste. James Rachell was born in Brownsville TN in 1910. When he was eight years old he was given a little pig to look after, but he traded it for a ‘hump-backed’ mandolin and, when his Mama had calmed down, he taught himself to play.

Yank Rachell. Toward the end of his life, bluesman Rachell was playing a Flatiron F-style mandolin (tuned E B F# C#) procured for him by ex–Lovin' Spoonful guitarist John Sebastian. 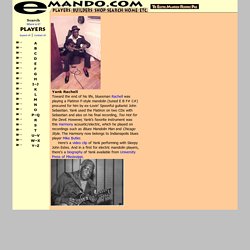 By John Waldrop The East Coast Blues, also known as Country Blues, and The Piedmont Blues, was played in the coastal Southern states. 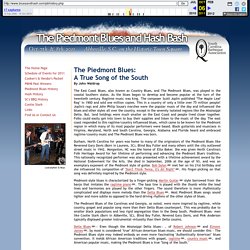 As the blues began to develop and become popular at the turn of the twentieth century, Ragtime music was king. The composer Scott Joplin published "The Maple Leaf Rag" in 1900 and sold one million copies. This in a country of only a little over 75 million people! Joplin's rags and John Philip Sousa's marches were the popular music of the day and influenced the blues and other styles all over the country, except in the severely isolated regions like the Mississippi Delta.

Durham, North Carolina for years was home to many of the originators of the Piedmont Blues like Reverend Gary Davis (Born in Laurens, SC), Blind Boy Fuller and many others until the city outlawed street music in 1942. Piedmont-style blues is characterized by a finger-picking Martin Guitar style borrowed from the banjo that imitates the ragtime piano. 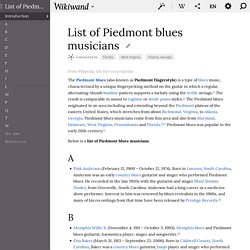 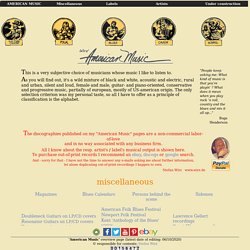 BenderWill BennettTon van Bergeyk. Cary Morin - Music Maker Relief Foundation. Cary Morin brings together the great musical traditions of America and beyond like no other, from the rocking, electrified world groove of The Atoll, to the pared-down acoustic blues of Sing It Louder. 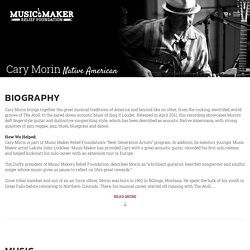 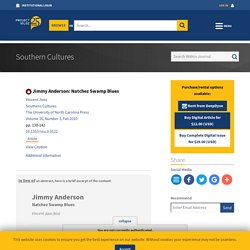 He rendered an excellent upbeat version of the murder ballad “Frankie and Johnny” and a laid-back version of Slim Harpo’s hit “I’m A King Bee,” and his song “Naggin’,” with its “wicked downbeat,” has been called “a minor masterpiece.” Jimmy Anderson, 2009, photographed by Vincent Joos. [End Page 130] Jimmy Anderson: Mississippi Folklife and Folk Artist Directory. Jimmy Anderson Harmonica Player and Vocalist, Natchez Harmonica player and vocalist Jimmy Anderson was born on a farm near Natchez on November 21, 1934. 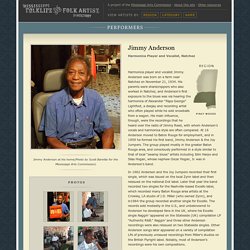 His parents were sharecroppers who also worked in Natchez, and Anderson’s first exposure to the blues was via hearing the harmonica of Alexander “Papa George” Lightfoot, a deejay and recording artist who often played while he sold snowballs from a wagon. Dixiefrog Records. Captain Luke (Luther Mayer) was born in Greenville, South Carolina in 1926. 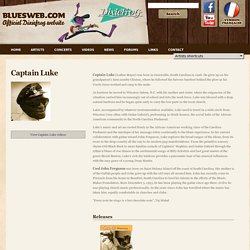 He grew up on his grandparent’s farm nearby Clinton, where he followed the furrows barefoot behind the plow as his Uncle Jesse worked and sang to his mule. At fourteen he moved to Winston-Salem, N.C. with his mother and sister, where the exigencies of the situation carried him increasingly out of school and into the work force. Luke was blessed with a deep natural baritone and he began quite early to carry the low parts in the local church. Later, accompanied by whatever instrumentation available, Luke used to travel in a wide circle from Winston (very often with Guitar Gabriel), performing in drink-houses, the social hubs of the African- American community in the North Carolina Piedmont. Luke’s music and art are rooted firmly in the African-American working class of the Carolina Piedmont and the mystique of his message refers continually to the blues experience. Releases. AlohaCriticón - Información y opinión independiente sobre cine, música rock y literatura.