Richard Scarry. Richard McClure Scarry (June 5, 1919 – April 30, 1994) was an American children's author and illustrator who published over 300 books with total sales of over 100 million worldwide.[1] Early life and education[edit] Overview of his work[edit] Scarry's most famous series of books was about Busytown. 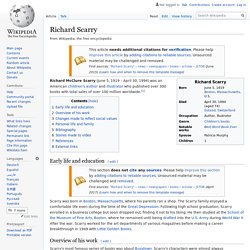 Scarry's characters were almost always anthropomorphic animals. His books were popular with children throughout the world. While his books are largely populated by common animal species such as dogs, cats, raccoons, bears, owls, goats, foxes, wolves, rabbits, lions, tigers, hippos, pigs, mice, chipmunks, elephants, crocodiles, beavers, walruses, and others, he proved to be quite adept at giving human characteristics to a seemingly endless number of creatures. Scarry was closely associated with mass-market children's publisher Ole Risom, "the author and illustrator whose [collaborative] books have sold more than 100 million copies around the world. Changes made to reflect social values[edit] Chris Ware. American artist Franklin Christenson "Chris" Ware (born December 28, 1967)[1] is an American cartoonist known for his Acme Novelty Library series (begun 1994) and the graphic novels Jimmy Corrigan, the Smartest Kid on Earth (2000), Building Stories (2012) and Rusty Brown (2019). 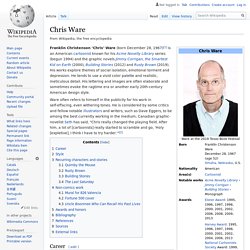 His works explore themes of social isolation, emotional torment and depression. He tends to use a vivid color palette and realistic, meticulous detail. His lettering and images are often elaborate and sometimes evoke the ragtime era or another early 20th-century American design style. Career[edit] Born in Omaha, Nebraska, Ware resides in the Chicago area of Illinois.[3] His earliest published strips appeared in the late 1980s on the comics page of The Daily Texan, the student newspaper of the University of Texas at Austin. In 2007, Ware curated an exhibition for the Phoenix Art Museum focused on the non-comic work of five contemporary cartoonists. Welcome to rcrumb.com - The Official Crumb Site. Sitio web oficial de Terry Gilliam. Mœbius Production — Editions, artprint et expositions ! Bruegel Paintings, Bio, Ideas. The Fight between Carnival and Lent (1559) In one of his more lurid and chaotic paintings, Bruegel offers us a dense allegorical representation of the competing drives underpinning human character by showing the customs associated with two festivals closely aligned in the early-modern calendar. 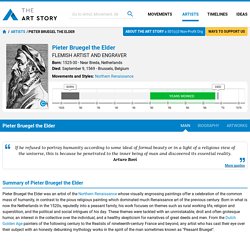 To the left, the figure of the Carnival holds sway: a fat man astride a beer barrel with a pork chop pinned to its front, spit-roasting a pig and wearing a meat pie as a helmet. He presides over a scene populated by jesters, revelers, musicians, thieves, and beggars. To the right, the gaunt figure of Lent, in the habit of a nun, extends a platter of fish, in defiance of his richer offerings. Behind her, hooded figures emerge from the archway of a church, in which the artworks are shrouded in the custom of the season of abstinence. The battle between Carnival and Lent stood partly for a contemporary struggle unfolding in Bruegel's home country. 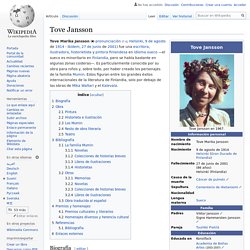 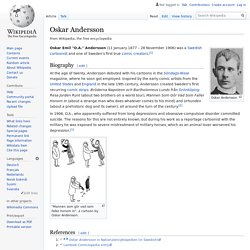 " Andersson (11 January 1877 – 28 November 1906) was a Swedish cartoonist and one of Sweden's first true comic creators.[1] Biography[edit] At the age of twenty, Andersson debuted with his cartoons in the Söndags-Nisse magazine, where he soon got employed. Inspired by the early comic artists from the United States and England in the late 19th century, Andersson created Sweden's first recurring comic strips: Bröderna Napoleon och Bartholomeus Lunds från Grönköping Resa Jorden Runt (about two brothers on a world tour), Mannen Som Gör Vad Som Faller Honom In (about a strange man who does whatever comes to his mind) and Urhunden (about a prehistoric dog and its owner), all around the turn of the century.[2] In 1906, O.A., who apparently suffered from long depressions and obsessive-compulsive disorder committed suicide.