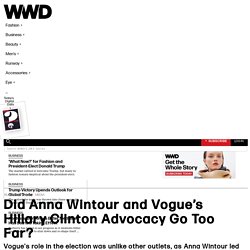 But Vogue’s endorsement — its first ever — held a particular significance for the magazine, the fashion community and Anna Wintour, the glossy’s editor in chief and artistic director of Condé Nast. WWD reached out to Wintour for her reaction to the election results, but the editor declined to comment. Wintour has been a staunch Clinton supporter, raising money for the nominee and rallying the fashion industry behind her to get out the vote and donate to the campaign, among other things. She has held countless fund-raisers in Paris and London during collections and on the East and West Coasts, as well as a fashion-show fund-raiser in September.

Wintour even gathered editors at Condé Nast with the CFDA and Instagram to launch a voter registration campaign. Tom Ford on Nocturnal Animals' Opening Credits. After three decades of working in the fashion industry, Tom Ford understands the power of a provocative image — and the opening-credits sequence of his new movie Nocturnal Animals may be the designer-filmmaker’s most controversial creative choice yet. 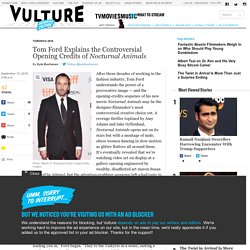 A revenge thriller toplined by Amy Adams and Jake Gyllenhaal, Nocturnal Animals opens not on its stars but with a montage of nude, obese women dancing in slow motion as glitter flutters all around them. It’s eventually revealed that we’re watching video art on display at a gallery opening engineered by wealthy, disaffected art maven Susan (played by Adams), but the attention-grabbing sequence left a bad taste in the mouths of some viewers here at the Toronto Film Festival, where the film had its North American premiere this week. Court ruling means act of parliament would be needed for Brexit, says May. Theresa May has said she accepts that the “logical conclusion” of the high court judgment on Brexit is that the government would have to pass an act of parliament before it could trigger article 50, the formal process for leaving the European Union. 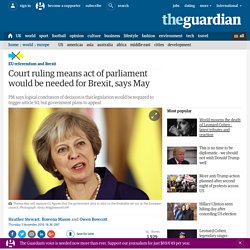 The government has said it will appeal against Thursday’s unexpected high court ruling, which stated that MPs needed to vote on triggering article 50. Downing Street has insisted it will stick to the timetable of invoking article 50 before the end of March 2017.