Balenciaga Fall 2006 by Nicolas Ghesquiere. Lady Gaga and RuPaul - Fashion! "Lady Gaga & the Muppets: Holiday Spectacular" Dior Hyménée wedding dress. Balenciaga Resort 2017 Collection. The fact that a sense of humor can be wrapped up in the “hit” of a seriously chic fashion idea is often overlooked. 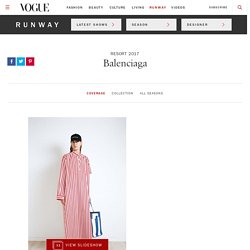 Bring forth exhibit A in Demna Gvasalia’s first Balenciaga Resort collection: a candy-striped bathrobe coat with a matching fringed stole-cum-towel thrown over one shoulder, contradictorily worn with a pair of pointy low-heeled ankle-strap shoes, and a baseball cap jammed on low over the face. What could this be, but a witty take on “resort” in its literal sense as luxury winter retreatwear yet transformed into something urban and street-clever, too? It’s not hard to read the geographical signposts for the Balenciaga holiday destination, what with all the shirting-stripe caftans, surely somewhere in North Africa, or thereabouts? But then again, maybe not. Down to earth yet elevated would be the way to put it about striped cotton aprons that are recast as halter-neck sundresses, or indeed the texture of generic Parisian café chairs, which are worked into the newest bags. Chanel Resort 2015 - Paris/Dubai. The crumbling theater in which Karl Lagerfeld staged Chanel's Couture show for Fall 2013 was a convincing evocation of a culture in ruins, bar the backdrop, which featured a perfectly airbrushed vision of a sci-fi skyline, a city of the future. 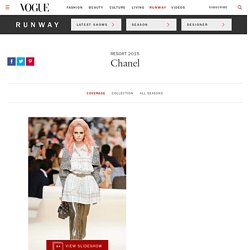 That backdrop came to life tonight when Lagerfeld presented Chanel's Cruise collection in Dubai, where brushed steel towers poke at the sky in shapes that are plucked from the dreams of feverish futurologists. It's been a decade or so since the designer was last here and he scarcely recognized the place. Valentino Gown. Chanel Spring 2015 Ready-to-Wear Collection. Today's set was Boulevard Chanel, a street scene immaculately re-created down to the last puddle on the asphalt and pane of glass in the apartment buildings, but when Karl Lagerfeld's models took to that street in protest, toting feminist placards and chanting slogans, there were some in the audience who blanched at what they saw as political passion co-opted by fashion artifice, especially in light of the current events in Hong Kong. 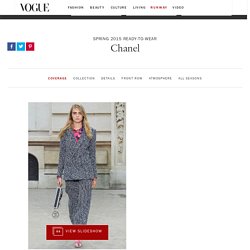 Lagerfeld said he conceived the show within 24 hours of his last epic, so today's headlines weren't as relevant to his concept as the manifestations—or demonstrations—that bring bits of Paris to a standstill on an almost daily basis. Taking it to the streets is a time-honored French tradition. "I thought it was fun to make a demonstration about a subject I can very well adapt to," he said. "My mother was a feminist, and I was brought up with a history of that. " Uncertain times in the Middle East, Opinion News. Uncertainty is the one word that sums up Middle Eastern reactions to the election of Mr Donald Trump to the United States presidency. 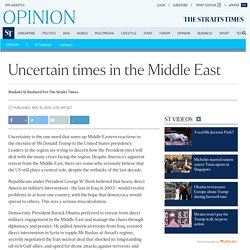 Leaders in the region are trying to discern how the President-elect will deal with the many crises facing the region. Despite America's apparent retreat from the Middle East, there are some who seriously believe that the US still plays a central role, despite the setbacks of the last decade. Anna Wintour and Conde Nast back Dorchester Collection hotel boycott. More than 50 dead in heavy Yemen fighting. A girl walks amongst rubbish at a slum in the Yemeni capital Sanaa on 9 November 2016 (AFP) Heavy fighting between government forces and rebels in north and west Yemen has left 51 dead, as a new peace efforts appeared to stumble, military officials said Wednesday. 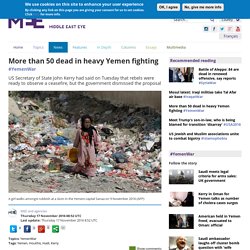 They said forces loyal to President Abedrabbo Mansour Hadi have clashed since Tuesday with Shiite Houthi rebels and allied renegade troops in the country's northwest, near the border with Saudi Arabia. The fighting as loyalists launched an attack on three fronts to recapture the coastal town of Midi and nearby Haradh, the officials said. Fifteen loyalists and 23 rebels were killed in the fighting, the officials said.

"Our military operations will continue until we push them out," said army Colonel Abdul Ghani al-Shubaili, whose forces had air support from a Saudi-led Arab coalition. Saudi Arabia Warns of Economic Fallout if Congress Passes 9/11 Bill. The administration, which argues that the legislation would put Americans at legal risk overseas, has been lobbying so intently against the bill that some lawmakers and families of Sept. 11 victims are infuriated. 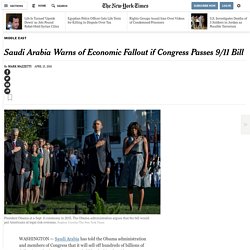 In their view, the Obama administration has consistently sided with the kingdom and has thwarted their efforts to learn what they believe to be the truth about the role some Saudi officials played in the terrorist plot. “It’s stunning to think that our government would back the Saudis over its own citizens,” said Mindy Kleinberg, whose husband died in the World Trade Center on Sept. 11 and who is part of a group of victims’ family members pushing for the legislation. will arrive in Riyadh on Wednesday for meetings with King Salman and other Saudi officials. It is unclear whether the dispute over the Sept. 11 legislation will be on the agenda for the talks. Saudi Arabia ‘wants to EXECUTE gay people who show their sexuality' Syrian women burn burkas to celebrate liberation from Isil in Manbij.

Muslims in UK top 3m for first time with over 50% born outside Britain. England is home to more than three million Muslims for the first time ever, new figures show. 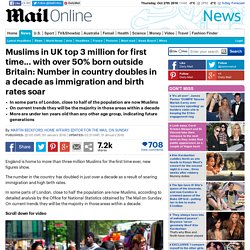 The number in the country has doubled in just over a decade as a result of soaring immigration and high birth rates. In some parts of London, close to half the population are now Muslims, according to detailed analysis by the Office for National Statistics obtained by The Mail on Sunday. On current trends they will be the majority in those areas within a decade. Her Highness Sheikha Moza Launches Global Push to Deliver Quality Schooling for World’s Hardest-to-Reach Children.

Nov 14, 2012 Educate A Child targets 61 million children missing out on basic education due to poverty, conflict, natural disaster and prejudice Her Highness Sheikha Moza bint Nasser launched a global initiative on November 14 at WISE 2012, that will deliver real progress towards the goal of bringing quality primary education to all the world’s children. 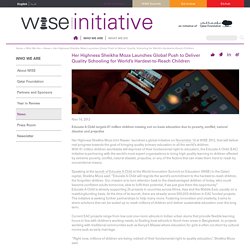 With 61 million children worldwide still deprived of their fundamental right to education, the Educate A Child (EAC) initiative is partnering with the world’s most expert organisations to bring high quality learning to children affected by extreme poverty, conflict, natural disaster, prejudice, or any of the factors that can make them hard to reach by conventional means. Sheikha Mozah: the (un)acceptable face of Qatar’s global expansion. Overlooking Regent’s Park, a short walk from the London Central Mosque, is Cornwall Terrace, a grade-one listed, postcard-perfect example of the Regency-era, high Greco-Roman style. 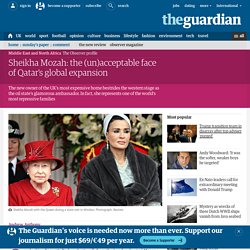 Laid out by John Nash and designed by Decimus Burton, the houses are so grand that they tend to be subdivided or occupied by corporations. But last year Sheikha Mozah bint Nasser al-Missned, perhaps the most publicity-friendly member of the Qatar royal family, bought three of the buildings for a reported £120m. Last week it was announced that she was having them turned into one 33,000 sq ft mansion, with games rooms, twin lifts, gymnasium and a swimming pool set in Portland stone. The result is likely to be the UK’s most expensive private home. Qatar’s nascent fashion industry finds ally in Sheikha Moza. Sheikha Moza bint Nasser al-Missned, the mother of the new Qatari emir, Sheikh Tamim, is renowned for her ability to merge the conservative social mores of Qatar with her acute eye for fashion when it comes to both her personal and investment style. 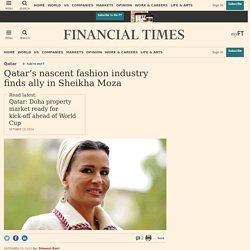 It is a talent that is changing her country’s relationship with the luxury industry. Sample the FT’s top stories for a week You select the topic, we deliver the news. The flowing robes of the 53-year-old chime with the ultraconservative Gulf, while their couture house origins are feted by fashion journalists and designers. Fashion house Balmain sold to Qatar's Mayhoola sovereign wealth fund. The Qatari investment fund that owns the Italian Valentino label will take over the French fashion house Balmain, which has become a favourite of film stars, the adviser for the acquisition has announced. “After completing this transaction Mayhoola for Investments will hold 100% of Balmain’s capital,” said the merger and acquisitions company Bucephale Finance. The French financial daily Les Echos in reporting on the acquisition said the Qataris offered €485m (£372m) for Balmain, which is 70% held by the heirs of the former CEO, Alain Hivelin, who died in December 2014, with the remaining 30% held by management.

Olympia Scarry Givenchy Burka - Picture of Givenchy Burka. Billy Farrell Advertisement - Continue Reading Below The artist Olympia Scarry, who with her boyfriend Neville Wakefield are the art industry's hottest new couple, wowed partygoers in Miami at Art Basel this year — and not because of a scantily-clad bathing costume, which is common of that part of the country. Royal College of Art student's Burka sculpture destroyed in post-Brexit rant.

An art student whose burka sculpture was destroyed days after the Brexit poll by a woman who shouted: “We voted to take our country back,” says she now feels unwelcome in London. Yasmeen Sabri, 24, was putting the finishing touches to her £6,000 work when Mikaela Haze, 70, walked into the Royal College of Art in South Kensington and ripped the veil from its metal frame. Haze also screamed: “Saudi Arabia go home,” before knocking the sculpture to the ground on June 29. Masters student Miss Sabri had spent six months creating the work, called Walk A Mile In Her Veil, for an exhibition to “promote tolerance and understanding”. Today she said: “I’ve never experienced anything like it.” At Westminster magistrates’ court Haze, of Bayswater, pleaded guilty to religiously aggravated criminal damage and will be sentenced next week.