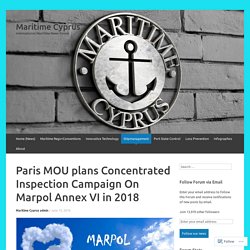 Mr. Brian Hogan chaired the meeting, held from 23 – 27 May 2016. The meeting was officially opened by the State Secretary Mrs. Price Index, News and Directory Information for the Marine Fuel Industry. The Secretary-General of the International Maritime Organization (IMO), Kitack Lim, says the success of port state control (PSC) "depends ultimately" on the harmonization of PSC inspections among various port states. 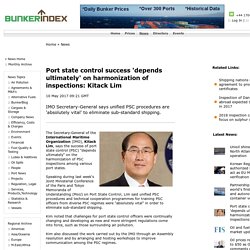 Speaking during last week's Joint Ministerial Conference of the Paris and Tokyo Memoranda of Understanding (MoU) on Port State Control, Lim said unified PSC procedures and technical cooperation programmes for training PSC officers from diverse PSC regimes were "absolutely vital" in order to eliminate sub-standard shipping. Kim noted that challenges for port state control officers were continually changing and developing as new and more stringent regulations come into force, such as those surrounding air pollution. 2020 Sulfur Cap to Impact Credit Lines. By Wendy Laursen 2017-05-10 21:03:45 The global sulfur emissions limit will drop to 0.50 percent in 2020, and most people are yet to appreciate what this will do to ship operators' finances. 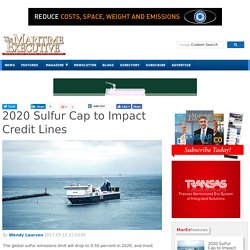 “The credit lines for fuel purchases will have to be expanded. Greenhouse Gas Strategy Shouldn't Focus on Targets. By MarEx 2017-05-10 19:24:39 The World Shipping Council (WSC) has filed a proposal with the IMO on the development of a comprehensive greenhouse gas strategy. 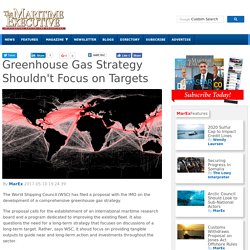 The proposal calls for the establishment of an international maritime research board and a program dedicated to improving the existing fleet. It also questions the need for a long-term strategy that focuses on discussions of a long-term target. Rather, says WSC, it shoud focus on providing tangible outputs to guide near and long-term action and investments throughout the sector. “If we expect to make substantial reductions in the fleet's carbon footprint, it will be critical to establish a significant and sustained research and development effort to identify what technology advances can be made in the maritime sector.

AMSA’s review on air emissions from ships. AMSA issued new Marine Notice to provide general information of the effective regulations for the prevention of air pollution from ships. 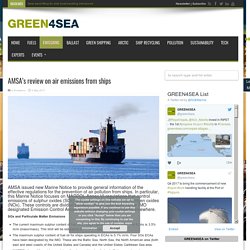 In particular, this Marine Notice focuses on MARPOL Annex VI regulations that control emissions of sulphur oxides (SOx) and particulate matter, and nitrogen oxides (NOx). These controls are divided between those applicable inside IMO designated Emission Control Areas (ECAs) and those applicable elsewhere. SOx and Particulate Matter Emissions The current maximum sulphur content of fuel oil for ships operating in areas other than ECAs is 3.5% m/m (mass/mass). This limit will be reduced to 0.5% m/m from 1 January 2020.The maximum sulphur content of fuel oil for ships operating in ECAs is 0.1% m/m. ABS Provides Key Insights during Mexico’s Regulatory Workshop. Mexico has recently begun taking steps toward ratifying the International Convention for the Prevention of Pollution from Ships (MARPOL) Annex VI, an International Maritime Organization (IMO) air pollution agreement. 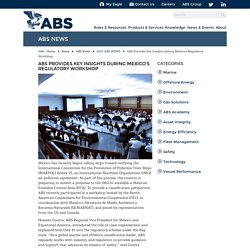 As part of the process, the country is preparing to submit a proposal to the IMO to establish a Mexican Emission Control Area (ECA). To provide a classification perspective, ABS recently participated in a workshop hosted by the North American Commission for Environmental Cooperation (CEC), in coordination with Mexico’s Secretaría de Medio Ambiente y Recursos Naturales (SEMARNAT), and joined by representatives from the US and Canada. Homero Guerra, ABS Regional Vice President for Mexico and Equatorial America, introduced the role of class organizations and explained how they fit into the regulatory scheme under the flag state. 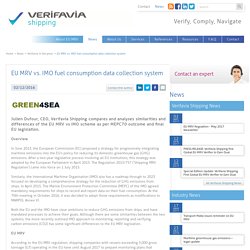 Overview In June 2013, the European Commission (EC) proposed a strategy for progressively integrating maritime emissions into the EU’s policy for reducing its domestic greenhouse gas (GHG) emissions. After a two-year legislative process involving all EU institutions, this strategy was adopted by the European Parliament in April 2015. The Regulation 2015/757 (‘Shipping MRV Regulation’) came into force on 1 July 2015. Similarly, the International Maritime Organisation (IMO) also has a roadmap through to 2023 focused on developing a comprehensive strategy for the reduction of GHG emissions from ships. Les pays européens sceptiques sur l’application de l’ETS au transport maritime – EURACTIV.fr. IMO 2020: The Future Of Fuel. IMO 2020 sulfur cap: lube producers take a pragmatic approach There has been little reaction by way of statements or position papers from marine fuel lubricant manufacturers to the IMO MEPC70 proposals for a global fuel sulfur content cap of 0.5 percent by 2020 but they are fully aware of the implications of the proposed regulations and are taking what could be termed a ‘pragmatic approach’ to fuel regulation compliance. 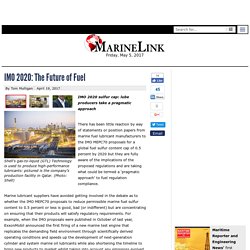 Marine lubricant suppliers have avoided getting involved in the debate as to whether the IMO MEPC70 proposals to reduce permissible marine fuel sulfur content to 0.5 percent or less is good, bad (or indifferent) but are concentrating on ensuring that their products will satisfy regulatory requirements. Opposite Approach: Lubes for High-Sulfur Fuel Chevron employs on-board drip oil monitoring in conjunction with on-shore testing to provide data to enable a vessel to optimize the feed rate on board to balance wear against consumption, thereby ensuring low running costs. Reducing emissions from the shipping sector. The EU is calling for a global approach to reducing greenhouse gas emissions from international shipping – a large and growing source of emissions. 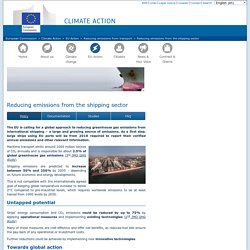 As a first step, large ships using EU ports will be from 2018 required to report their verified annual emissions and other relevant information. Maritime transport emits around 1000 million tonnes of CO2 annually and is responsible for about 2.5% of global greenhouse gas emissions (3rd IMO GHG study). Shipping emissions are predicted to increase between 50% and 250% by 2050 – depending on future economic and energy developments. This is not compatible with the internationally agreed goal of keeping global temperature increase to below 2°C compared to pre-industrial levels, which requires worldwide emissions to be at least halved from 1990 levels by 2050. IMO takes further action on climate change. The Marine Environment Protection Committee (MEPC) of the International Maritime Organization (IMO) has approved mandatory requirements for ships to record and report their fuel consumption, in a move that sends a clear and positive signal about the Organization’s continuing commitment to climate change mitigation. 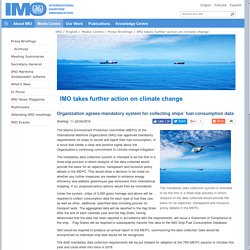 The mandatory data collection system is intended to be the first in a three-step process in which analysis of the data collected would provide the basis for an objective, transparent and inclusive policy debate in the MEPC. This would allow a decision to be made on whether any further measures are needed to enhance energy efficiency and address greenhouse gas emissions from international shipping. MRV Compliance by Pole Star. Comment mettre en œuvre l’annexe 6 #Marpol au Mexique? Des représentants □□□□□□ en débattent cette semaine à Mexico. IMO informs on ECAs updates.