Paris MoU, Tokyo MoU announce CIC on ECDIS. The Paris Memorandum of Understanding (MoU) has announced that it will be conducting a concentrated inspection campaign (CIC) jointly with the Tokyo MoU. 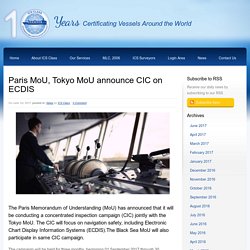 The CIC will focus on navigation safety, including Electronic Chart Display Information Systems (ECDIS).The Black Sea MoU will also participate in same CIC campaign. The campaign will be held for three months, beginning 01 September 2017 through 30 November 2017. During this time, Port State Control (PSC) Officers are expected to use a standard questionnaire, which will be published in August 2017. The new CIC was announced during Paris MoU 35th anniversary meeting in Poland, where many issues were discussed.

Also, the methodology for calculating flag and recognized organization (RO) performance, used for the targeting of ships for inspection, is being reviewed. BOURBON, Kongsberg Partner On Digitalization. BOURBON and Kongsberg Maritime will execute joint projects under a new partnership agreement to develop new ways of efficient operations in the offshore services industry, with a focus on digital solutions for connected and autonomous vessels. 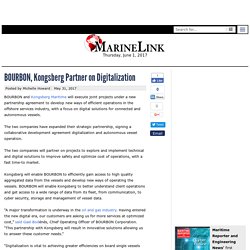 The two companies have expanded their strategic partnership, signing a collaborative development agreement digitalization and autonomous vessel operation. The two companies will partner on projects to explore and implement technical and digital solutions to improve safety and optimize cost of operations, with a fast time-to market. Kongsberg will enable BOURBON to efficiently gain access to high quality aggregated data from the vessels and develop new ways of operating the vessels. BOURBON will enable Kongsberg to better understand client operations and get access to a wide range of data from its fleet, from communication, to cyber security, storage and management of vessel data. 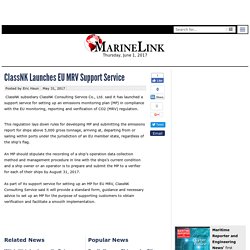 This regulation lays down rules for developing MP and submitting the emissions report for ships above 5,000 gross tonnage, arriving at, departing from or sailing within ports under the jurisdiction of an EU member state, regardless of the ship’s flag. An MP should stipulate the recording of a ship’s operation data collection method and management procedure in line with the ships’s current condition and a ship owner or an operator is to prepare and submit the MP to a verifier for each of their ships by August 31, 2017. New fleet performance management solution launched. BMT SMART (BMT), a subsidiary of BMT Group, has launched SMARTNOON, a new solution aiming to deliver higher resolution vessel performance data, based on noon reports. 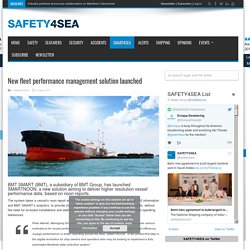 The system takes a vessel’s noon report as a starting point and then adds metocean data, AIS information and BMT SMART’s analytics, to provide ship owners and operators with the necessary insights, without the need for on-board installations and additional sensors, or disruptive changes to established operating behaviours. Peter Mantel, Managing Director at BMT SMART, states: “We recognise that there are various motivations for vessel performance management. World Maritime News. The implementation of the EU MRV is fast approaching, mandating the monitoring, reporting and verification of the CO2 emissions from ships larger than 5,000 gross tons that call at ports in the EU region. 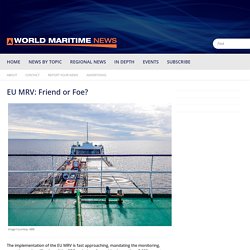 The EU regulation entered into force on July 1, 2015 and it requires shipowners and operators to prepare a monitoring plan for each of their ships that falls under the scope of the regulation. As the monitoring plan needs to be signed off by an independent verifier it should be submitted by August 31, 2017 at the latest. Data collection takes place on a per voyage basis and starts on January 1, 2018. It will reoccur annually, from Jan 1 to Dec 31. ExactEarth Launches Revolutionary Global Real-Time Maritime Tracking and Information Service. ExactEarth launches first global real-time vessel tracking service (CNW Group/exactEarth Ltd.) 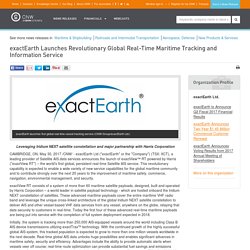 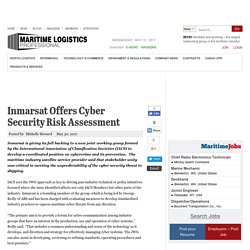 The maritime industry satellite service provider said that stakeholder unity was critical in meeting the unpredictability of the cyber security threat to shipping. IACS sees the JWG approach as key to driving pan-industry technical or policy initiatives forward where the issue identified affects not only IACS Members but other parts of the industry. ABS Nautical Systems Simplifies MRV Compliance. ABS, a leading provider of classification and technical services to the offshore and marine industries, has launched ABS Nautical Systems NS Voyage Manager to simplify compliance reporting. 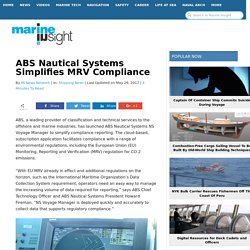 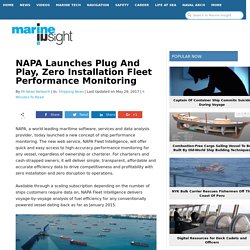 The new web service, NAPA Fleet Intelligence, will offer quick and easy access to high-accuracy performance monitoring for any vessel, regardless of ownership or charterer. For charterers and cash-strapped owners, it will deliver simple, transparent, affordable and accurate efficiency data to drive competitiveness and profitability with zero installation and zero disruption to operations. Available through a scaling subscription depending on the number of ships customers require data on, NAPA Fleet Intelligence delivers voyage-by-voyage analysis of fuel efficiency for any conventionally powered vessel dating back as far as January 2015. 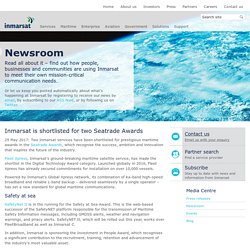 With the amendment of Annex VI of MARPOL 73/78 coming into force in January 2020, there is now even more reason to adopt SKF BlueMon’s automated approach to compliance. The existing SKF BlueMon product already focusses on Annex I. As well as collecting and analysing data from a variety of sensors, its mapping application visually relates measurements to the vessel’s geographical position in reference to relevant ECAs at any given time.