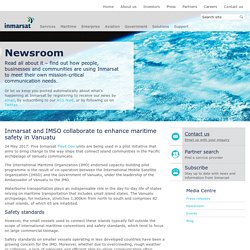 The International Maritime Organization (IMO) endorsed capacity-building pilot programme is the result of co-operation between the International Mobile Satellite Organization (IMSO) and the Government of Vanuatu, under the leadership of the Ambassador of Vanuatu to the IMO. Waterborne transportation plays an indispensable role in the day-to-day life of states relying on maritime transportation that includes small island states.

The Vanuatu archipelago, for instance, stretches 1,300km from north to south and comprises 82 small islands, of which 65 are inhabited. Safety standards. Iridium® Makes it Easier to Extend the Internet of Things (IoT) Beyond Cellular Limits (NASDAQ:IRDM) MCLEAN, Va., May 23, 2017 (GLOBE NEWSWIRE) -- Iridium Communications Inc. 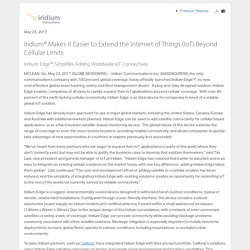 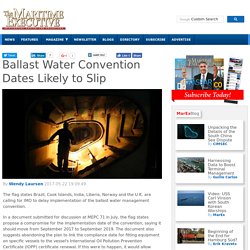 In a document submitted for discussion at MEPC 71 in July, the flag states propose a compromise for the implementation date of the convention, saying it should move from September 2017 to September 2019. The document also suggests abandoning the plan to link the compliance date for fitting equipment on specific vessels to the vessel's International Oil Pollution Prevention Certificate (IOPP) certificate renewal. If this were to happen, it would allow equipment retrofits to be undertaken up until 2014. The likelihood of this paper going through is quite high, says ballast water management consultant Jad Mouawad. Nigeria enhances maritime security. Speaking in Lagos recently, the Director General of the Nigerian Maritime Administration and Safety Agency (NIMASA), Dr. 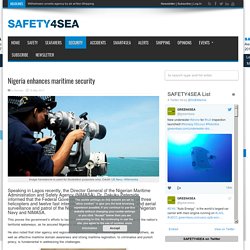 Dakuku Peterside, informed that the Federal Government approved the procurement of three helicopters and twelve fast intervention vessels, to ensure coastal and aerial surveillance and patrol of the Nigerian maritime environment by the Nigerian Navy and NIMASA. This proves the government’s efforts to tackle the menace of piracy and other illicit crimes on the nation’s territorial waterways, as he assured Nigerians and the international maritime community. He also noted that inter agency and regional cooperation through bilateral agreements among others, as well as effective maritime domain awareness and strong maritime legislation, to criminalise and punish piracy, is fundamental in addressing the challenges. IMO Regional Technology Center Nominated in Panama. By MarEx 2017-04-26 20:46:47 The International Maritime University of Panama has been selected to host the IMO’s regional maritime technology cooperation center for the Latin America region. 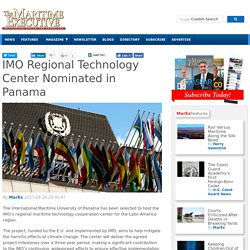 The project, funded by the E.U. and implemented by IMO, aims to help mitigate the harmful effects of climate change. The center will deliver the agreed project milestones over a three-year period, making a significant contribution to the IMO’s continuing, widespread efforts to ensure effective implementation and enforcement of the global energy-efficiency regulations for international shipping. Other centers have already been established in Africa, Asia and the Caribbean. CMA CGM rights the ship in Q1. French ocean carrier CMA CGM Group reported a net income of $86 million for the first quarter of 2017, compared to a loss of $100 million for last year’s first quarter, according to the company's most recent financial statements. 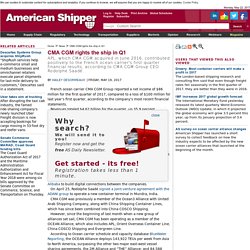 Revenues totaled $4.62 billion for the quarter, up 35.9 percent year-over-year. “The increase of average revenue per container carried led overall revenue to rise faster than volumes,” CMA CGM said of the strong revenue growth.