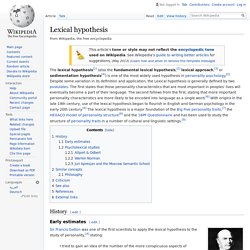 The first states that those personality characteristics that are most important in peoples' lives will eventually become a part of their language. History[edit] Early estimates[edit] Sir Francis Galton was one of the first scientists to apply the lexical hypothesis to the study of personality,[4] stating: Francis Galton - Wikipedia. Sir Francis Galton, FRS (/ˈfrɑːnsɪs ˈɡɔːltən/; 16 February 1822 – 17 January 1911) was an English Victorian statistician, progressive, polymath, sociologist, psychologist,[1][2] anthropologist, eugenicist, tropical explorer, geographer, inventor, meteorologist, proto-geneticist, and psychometrician. 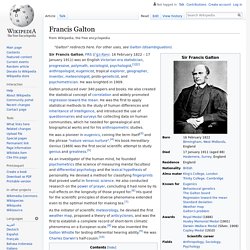 He was knighted in 1909. Galton produced over 340 papers and books. 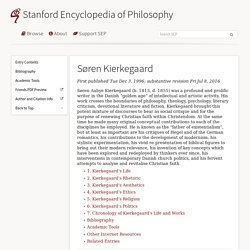 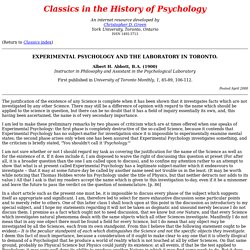 Green York University, Toronto, Ontario ISSN 1492-3713 (Return to Classics index) Albert H. Abbott, B.A. (1900)Instructor in Philosophy and Assistant in the Psychological Laboratory. Classics in the History of Psychology. Ebbinghaus.wmv. Password psychology - Wikipedia. In order for a password to work successfully and provide security to its user it must be kept secret and un-guessable; this also requires the user to memorize their password. 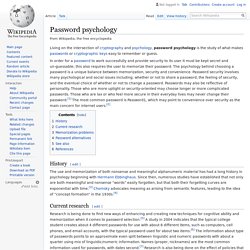 The psychology behind choosing a password is a unique balance between memorization, security and convenience. Password security involves many psychological and social issues including; whether or not to share a password, the feeling of security, and the eventual choice of whether or not to change a password. Passwords may also be reflective of personality. Those who are more uptight or security-oriented may choose longer or more complicated passwords. THE POSITIVIST REPUDIATION OF WUNDT. Ebbinghaus.

Lacks a few of the details, but conceptually effective – seanmhines

Wundt and the Founding of Psychology. Mental Imagery (Stanford Encyclopedia of Philosophy) 1. 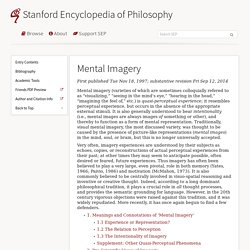 Meanings and Connotations of ‘Mental Imagery’ Mental imagery is a familiar aspect of most people's everyday experience (Galton, 1880a,b, 1883; Betts, 1909; Doob, 1972; Marks, 1972, 1999). A few people may insist that they rarely, or even never, consciously experience imagery (Galton, 1880a, 1883; Faw, 1997, 2009; but see Brewer & Schommer-Aikins, 2006), but for the vast majority of us, it is a familiar and commonplace feature of our mental lives. The English language supplies quite a range of idiomatic ways of referring to visual mental imagery: ‘visualizing,’ ‘seeing in the mind's eye,’ ‘having a picture in one's head,’ ‘picturing,’ ‘having/seeing a mental image/picture,’ and so on.