Latitudes of Acceptance. My research goes all over the place. 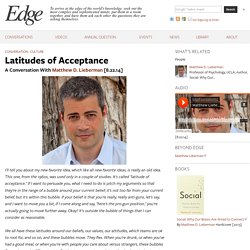 My research stems from work that I've done with my wife, Naomi Eisenberger, on how we experience social pain, and I did that for several years. Now I a lot more of my questions focus on social thinking—how we understand other people and ourselves, and how our brain seems to be strongly predisposed to get us into the mindset for thinking about other people. It's not just one of many different programs we can call up. We can do that, too—I'm going to think about algebra now, I'm going to think about history—but one of the things that's really intriguing to me is that it seems like the brain, of all the things it could choose, seems to choose by default bringing up a way of thinking about the world socially, and perhaps getting us ready to walk into the next moment of our lives to think socially. Auden Psychology and Art. Art of memory.

The art of memory (Latin: ars memoriae) is any of a number of loosely associated mnemonic principles and techniques used to organize memory impressions, improve recall, and assist in the combination and 'invention' of ideas. 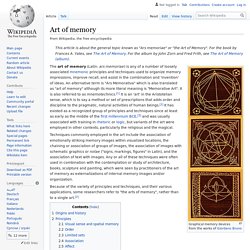 An alternative and frequently used term is "Ars Memorativa" which is also often translated as "art of memory" although its more literal meaning is "Memorative Art". It is sometimes referred to as mnemotechnics.[1] It is an 'art' in the Aristotelian sense, which is to say a method or set of prescriptions that adds order and discipline to the pragmatic, natural activities of human beings.[2] It has existed as a recognized group of principles and techniques since at least as early as the middle of the first millennium BCE,[3] and was usually associated with training in rhetoric or logic, but variants of the art were employed in other contexts, particularly the religious and the magical. Origins and history[edit] Ars Memoriæ, by Robert Fludd Principles[edit] Do People Actually Believe in Objective Moral Truths? « On the Human. Imagine two people discussing a question in mathematics. 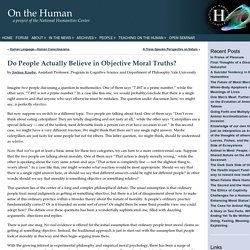 One of them says “7,497 is a prime number,” while the other says, “7,497 is not a prime number.” In a case like this one, we would probably conclude that there is a single right answer and that anyone who says otherwise must be mistaken. The question under discussion here, we might say, is perfectly objective. But now suppose we switch to a different topic. Two people are talking about food. Microessay1. &quot;When You Tell Someone You’re an Artist that Is Native, They Tell You Who You Should Be&quot; How can one unmoor markers of identity from essentialized contexts while maintaining cultural heritage as a central part of one’s art practice? 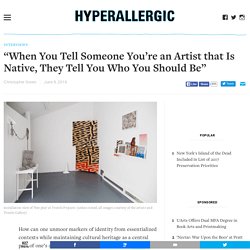 Wife and husband duo Maria Hupfield and Jason Lujan investigated that question while in residence for a month at Trestle Gallery‘s project space in Gowanus, Brooklyn, where they were invited by curator-in-residence Melissa Staiger. Both artists maintain individual practices while working together as Native Art Department International, a collaborative project that focuses on the circulation of art in international contexts to function as, in their words, an “emancipation from identity-based artwork.” The results of their residency are on view in the Trestle Projects exhibition free play, a contrast in styles that nonetheless works to point out the plasticity of contemporary indigeneity and the failure of stereotypes to account for what Native Art should look like today.