'Optimal relevance' as a pragmatic criterion: the role of epistemic vigilance. Art processed as ostensive communication. How portraits turned their eyes upon us: Visual preferences and demographic change in cultural evolution - Evolution and Human Behavior. To view the full text, please login as a subscribed user or purchase a subscription. 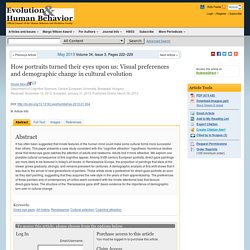 Click here to view the full text on ScienceDirect. Fig. 1 Proportion of direct-gaze paintings in European Renaissance portraits (1500–1599), decade by decade, shown with 95% confidence intervals (Wald test). Fig. 2. Cultural evolution of systematically structured behaviour in a non-human primate. (a) Increase in performance Using a GLMM with the success on each trial as a binary-dependent variable and a logit link function, we found a progressive increase in performance on the task across generations of transmission, typical of cumulative cultural evolution [10] (figure 2, additional details regarding the statistical models are provided in the electronic supplementary material). 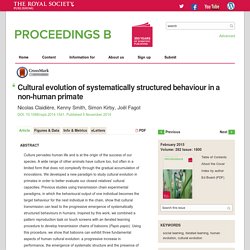 In our experiment, a successful trial (which triggered the delivery of a reward by the computer) was defined as one in which the animal touched three or four correct squares out of four. We used this binary variable (success or failure for each trial) to analyse the evolution of success across generations. We found a significant interaction between the number of generations and the experimental condition (random or transmission trials; Wald test, β[transmission] − β[random] = 0.19, s.e. = 0.02, z = 8.29, p < 0.001).

Figure 2. Gradual increase in performance over time. Humans, baboons share cumulative culture ability. The ability to build up knowledge over generations, called cumulative culture, has given mankind language and technology. 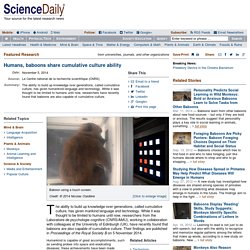 While it was thought to be limited to humans until now, researchers from the Laboratoire de psychologie cognitive (CNRS/AMU), working in collaboration with colleagues at the University of Edinburgh (UK), have recently found that baboons are also capable of cumulative culture. Their findings are published in Proceedings of the Royal Society B on 5 November 2014. Humankind is capable of great accomplishments, such as sending probes into space and eradicating diseases; these achievements have been made possible because humans learn from their elders and enrich this knowledge over generations.

It was previously thought that this cumulative aspect of culture -- whereby small changes build up, are transmitted, used and enriched by others -- was limited to humans, but it has now been observed in another primate, the baboon. BaumardBoyer2013TiCS. Epistemic vigilance... and epistemic recklessness. Details Category: Pascal's blog Published on Sunday, 07 August 2011 23:00 Written by Pascal Boyer We have all enjoyed, if that is the right word, conversations with people who seem to have no great regard for the niceties of argument and evidence - people who tell you that homeopathy does work because it cured them of a common cold, in a few days… Or that the FBI (or other such agencies) deliberately created the AIDS virus (or crack cocaine) to destroy Africans (or black Americans)… In many cases, such epistemic lapses are context-specific - the same person who claims that homeopathy does work will insist on proper evidence when buying a dishwasher or deciding on a school for their children. 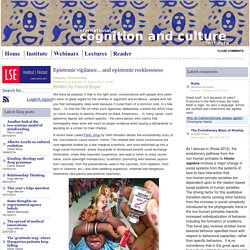 A recent book called Panic Virus by Seth Mnookin details the extraordinary story of the “vaccinations cause autism” meme. As Mnookin relates, the movement soon acquired many characteristics of a cult... Specially troubling is the acute paranoia that seems to pervade the online and physical meetings. ResponseToHenrichAndBoydDraft.pdf. Why Is Religion Natural? Article Pascal Boyer Volume 28.2, March / April 2004 Is religious belief a mere leap into irrationality as many skeptics assume? 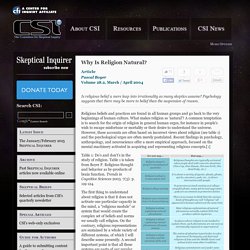 Psychology suggests that there may be more to belief than the suspension of reason. Religious beliefs and practices are found in all human groups and go back to the very beginnings of human culture. Table 1: Do’s and don't’s in the study of religion. The first thing to understand about religion is that it does not activate one particular capacity in the mind, a “religious module” or system that would create the complex set of beliefs and norms we usually call religion. Relevance Teory: A Tutorial. Beyond mind-reading: multi-voxel pattern analysis of fMRI data. Hugo Mercier: "Toward The Seamless Integration Of The Sciences" There are several issues. 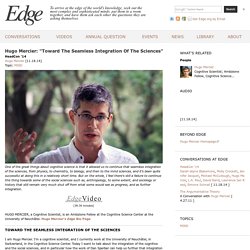 Some of them are just purely sociological, but some of them are more substantial. Two of the issues I would suggest are that maybe we don't necessarily have the right tools to help people in the social sciences see how they can use the cognitive sciences, and the other is that in some cases we don't have very good models of high-level cognition. Even if they could integrate what we know about cognition with what they want to explain in the social sciences, we just wouldn't be able to provide them with the right mechanisms to tinker with.

Some of Sperber's work can help us solve both of these issues. On the first front, which is to have conceptual tools to integrate cognition and culture, to make cognitive and social sciences shorter. One of the many things that his studies of communication have revealed is that—people kind of knew all along, but they hadn't really fully realized it, I guess—communication is extremely noisy.