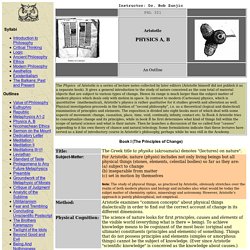 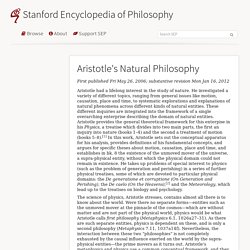 Natures Nature, according to Aristotle, is an inner principle of change and being at rest (Physics 2.1, 192b20–23). This means that when an entity moves or is at rest according to its nature reference to its nature may serve as an explanation of the event. We have to describe how—to what extent, through what other processes, and due to what agency—the preconditions for the process of change or being at rest are present, but once we have provided an account of these preconditions, we have given a complete account of the process.

Aristotle on the Soul. Ae_Bk_1-2. Sense Cognition: Aristotle vs. Aquinas. By Mortimer J. 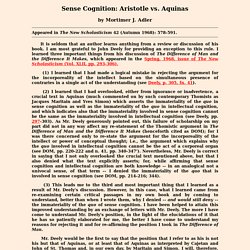 Adler Appeared in The New Scholasticism 42 (Autumn 1968): 578-591. It is seldom that an author learns anything from a review or discussion of his book. I am most grateful to John Deely for providing an exception to this rule. The Cambridge Companion to Aristotle - Jonathan Barnes. Aristotle on Non-contradiction. 1. 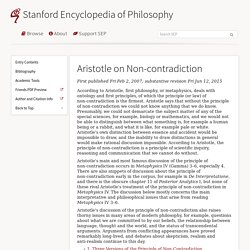 Three Versions of the Principle of Non-Contradiction There are arguably three versions of the principle of non-contradiction to be found in Aristotle: an ontological, a doxastic and a semantic version. The first version concerns things that exist in the world, the second is about what we can believe, and the third relates to assertion and truth. The first version (hereafter, simply PNC) is usually taken to be the main version of the principle and it runs as follows: “It is impossible for the same thing to belong and not to belong at the same time to the same thing and in the same respect” (with the appropriate qualifications) (Metaph IV 3 1005b19–20).

The following are some of those qualifications: The “same thing” that belongs must be one and the same thing and it must be the actual thing and not merely its linguistic expression. The second version is as follows: “It is impossible to hold (suppose) the same thing to be and not to be (Metaph IV 3 1005b24 cf.1005b29–30).” 2. 3. 4. 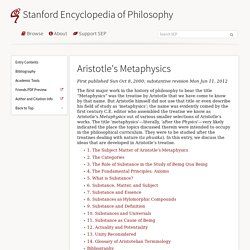 The Subject Matter of Aristotle’s Metaphysics Aristotle himself described his subject matter in a variety of ways: as ‘first philosophy’, or ‘the study of being qua being’, or ‘wisdom’, or ‘theology’. A comment on these descriptions will help to clarify Aristotle’s topic. In Metaphysics A.1, Aristotle says that “all men suppose what is called wisdom (sophia) to deal with the first causes (aitia) and the principles (archai) of things” (981b28), and it is these causes and principles that he proposes to study in this work.

It is his customary practice to begin an inquiry by reviewing the opinions previously held by others, and that is what he does here, as Book A continues with a history of the thought of his predecessors about causes and principles. These causes and principles are clearly the subject matter of what he calls ‘first philosophy’. Aristotle’s Greek word that has been Latinized as ‘qua’ means roughly ‘in so far as’ or ‘under the aspect’. Of Memory, Reminiscence, and Writing: On the Verge - David Farrell Krell. On Memory and Reminiscence by Aristotle. Aristotle. 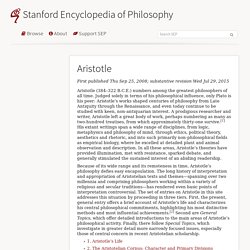 Aristotle’s Life Born in 384 B.C.E. in the Macedonian region of northeastern Greece in the small city of Stagira (whence the moniker ‘the Stagirite’), Aristotle was sent to Athens at about the age of seventeen to study in Plato’s Academy, then a pre-eminent place of learning in the Greek world. Once in Athens, Aristotle remained associated with the Academy until Plato’s death in 347, at which time he left for Assos, in Asia Minor, on the northwest coast of present-day Turkey.

There he continued the philosophical activity he had begun in the Academy, but in all likelihood also began to expand his researches into marine biology. He remained at Assos for approximately three years, when, evidently upon the death of his host Hermeias, a friend and former Academic who had been the ruler of Assos, Aristotle moved to the nearby coastal island of Lesbos. It is difficult to rule out that possibility decisively, since little is known about the period of Aristotle’s life from 341–335. 2. 3. Aristotle's Psychology. 1. 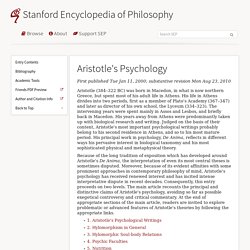 Aristotle's Psychological Writings Aristotle investigates psychological phenomena primarily in De Anima and a loosely related collection of short works called the Parva Naturalia, whose most noteworthy pieces are De Sensu and De Memoria. He also touches upon psychological topics, often only incidentally, in his ethical, political, and metaphysical treatises, as well as in his scientific writings, especially De Motu Animalium. The works in the Parva Naturalia are, in comparison with De Anima, empirically oriented, investigating, as Aristotle says, “the phenomena common to soul and body” (De Sensu 1, 436a6–8). This contrasts with De Anima, which introduces as a question for consideration “whether all affections are common to what has the soul or whether there is some affection peculiar to the soul itself” (De Anima i 1, 402a3–5).