Ötzi the Iceman. Ötzi (German pronunciation: [ˈœtsi] ( ); also called Ötzi the Iceman, the Similaun Man, the Man from Hauslabjoch, Homo tyrolensis, and the Hauslabjoch mummy) is a well-preserved natural mummy of a man who lived around 3,300 BCE.[2][3] The mummy was found in September 1991 in the Ötztal Alps, hence Ötzi, near the Similaun mountain and Hauslabjoch on the border between Austria and Italy.[4] He is Europe's oldest known natural human mummy, and has offered an unprecedented view of Chalcolithic Europeans. 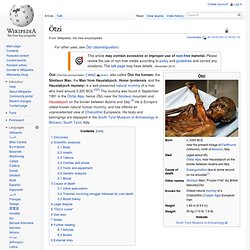 His body and belongings are displayed in the South Tyrol Museum of Archaeology in Bolzano, South Tyrol, Italy. Discovery Ötzi the Iceman while still frozen in the glacier, photographed by Helmut Simon upon the discovery of the body in September 1991 46°46′45.8″N 10°50′25.1″E﻿ / ﻿46.779389°N 10.840306°E﻿ / 46.779389; 10.840306.[7] The province of South Tyrol therefore claimed property rights, but agreed to let Innsbruck University finish its scientific examinations. Scientific analyses Body Blood. Mahavira. Mahavira (540 BCE–468 BCE[1]), also known as Vardhamana, was the twenty-fourth and last tirthankara of Jainism. 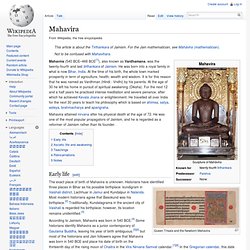 He was born into a royal family in what is now Bihar, India. At the time of his birth, the whole town marked prosperity in term of agriculture, health, wealth and wisdom. It is for this reason that he was named as Vardhman (Hindi : Vridhi) by his parents. David. The Books of Samuel, 1 Kings, and 1 Chronicles are the only sources of information on David, although the Tel Dan Stele (dated c. 850–835 BC) contains the phrase בית דוד (Beit David), read as "House of David", which most scholars take as confirmation of the existence in the mid-9th century BC of a Judean royal dynasty called the House of David. 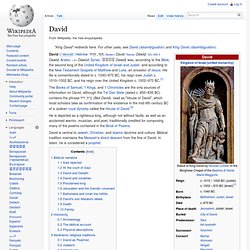 He is depicted as a righteous king, although not without faults, as well as an acclaimed warrior, musician, and poet, traditionally credited for composing many of the psalms contained in the Book of Psalms. David is central to Jewish, Christian, and Islamic doctrine and culture. Isaiah. Isaiah (US /aɪˈzeɪ.ə/ or UK /aɪˈzaɪ.ə/;[2] Hebrew: יְשַׁעְיָהוּ, Modern Yeshayahu Tiberian Yəšạʻyā́hû ; Syriac: ܐܫܥܝܐ Eshaya; Greek: Ἠσαΐας, Ēsaïās; Arabic: إشعيا Ishiya;[1] "Yah is salvation"[3]) was a prophet said by the Biblical Book of Isaiah to have lived in the 8th-century BC Kingdom of Judah.[4][5] The exact relationship between the Book of Isaiah and any such historical Isaiah remains the subject of ongoing scholarly discussion. 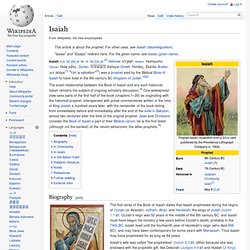 [a] One widespread view sees parts of the first half of the book (chapters 1–39) as originating with the historical prophet, interspersed with prose commentaries written in the time of King Josiah a hundred years later; with the remainder of the book dating from immediately before and immediately after the end of the exile in Babylon, almost two centuries after the time of the original prophet. Biography[edit] Abraham. Abraham (Hebrew: אַבְרָהָם‎ Abram was called by God to leave his father Terah's house and native land of Mesopotamia in return for a new land, family, and inheritance in Canaan, the promised land. 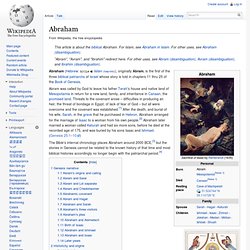 Threats to the covenant arose – difficulties in producing an heir, the threat of bondage in Egypt, of lack of fear of God – but all were overcome and the covenant was established.[1] After the death, and burial of his wife, Sarah, in the grave that he purchased in Hebron, Abraham arranged for the marriage of Isaac to a woman from his own people. Abraham later married a woman called Keturah and had six more sons, before he died at the recorded age of 175, and was buried by his sons Isaac and Ishmael. (Genesis 25:1–10) Herod the Great. Biography[edit] Copper coin of Herod, bearing the legend "ΒΑΣΙΛΕΩΣ ΗΡΩΔΟΥ" ("Basileōs Hērōdou") on the obverse Herod was born around 74 BCE in Idumea, south of Judea.[12][13] He was the second son of Antipater the Idumaean, a high-ranked official under Ethnarch Hyrcanus II, and Cypros, a Nabatean. 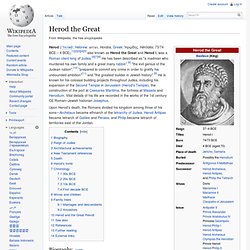 Herod practiced Judaism, as many Edomites and Nabateans had been commingled with the Jews and adopted their customs.[14] These "Judaized" Edomites were not considered Jewish by the dominant Pharisaic tradition, so even though Herod may have considered himself of the Jewish faith, he was not considered Jewish by the observant and nationalist Jews of Judea.[15] A loyal supporter of Hyrcanus II, Antipater appointed Herod governor of Galilee at 25, and his elder brother, Phasael, governor of Jerusalem. He enjoyed the backing of Rome but his brutality was condemned by the Sanhedrin.[16] Model of Herod's Temple Herod later executed several members of his own family, including his wife Mariamne I.[23] 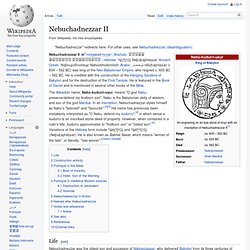 He is credited with the construction of the Hanging Gardens of Babylon and for the destruction of the First Temple. He is featured in the Book of Daniel and is mentioned in several other books of the Bible. The Akkadian name, Nabû-kudurri-uṣur, means "O god Nabu, preserve/defend my firstborn son". Nebuchadnezzar I. Nebuchadnezzar I[nb 2] /ˌnɛbjəkədˈnɛzər/, ca. 1126–1103 BC, was the fourth king of the Second Dynasty of Isin and Fourth Dynasty of Babylon. 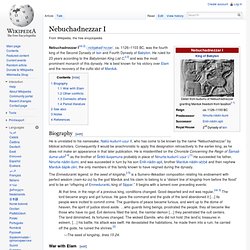 He ruled for 23 years according to the Babylonian King List C,[i 2] and was the most prominent monarch of this dynasty. He is best known for his victory over Elam and the recovery of the cultic idol of Marduk. Biography[edit] He is unrelated to his namesake, Nabû-kudurrī-uṣur II, who has come to be known by the name “Nebuchadnezzar” by biblical scholars. Consequently it would be anachronistic to apply this designation retroactively to the earlier king, as he does not make an appearance in that later publication. The Enmeduranki legend, or the seed of kingship,[i 5] is a Sumero-Akkadian composition relating his endowment with perfect wisdom (nam-kù-zu) by the god Marduk and his claim to belong to a “distant line of kingship from before the flood” and to be an “offspring of Enmeduranki, king of Sippar.” War with Elam[edit] Other conflicts[edit] Saint Peter. Saint Peter (Latin: Petrus, Greek: Πέτρος Petros; died AD 64 or 67),[3] also known as Simon Peter, was one of the Twelve Apostles of Jesus Christ, leaders of the early Christian Church, according to the New Testament. 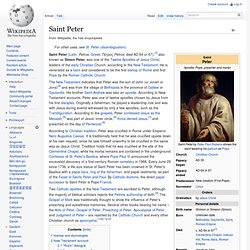 He is venerated as a saint and considered to be the first bishop of Rome and first Pope by the Roman Catholic Church. According to Christian tradition, Peter was crucified in Rome under Emperor Nero Augustus Caesar. It is traditionally held that he was crucified upside down at his own request, since he saw himself unworthy to be crucified in the same way as Jesus Christ. Saint Joseph. Joseph is venerated as a saint in the Catholic, Eastern Orthodox, Oriental Orthodox, Anglican, Lutheran[7][8] and Methodist[9][10] faiths. 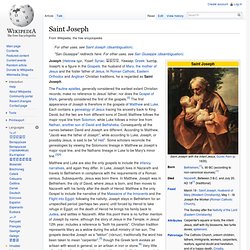 In Catholic and other traditions, Joseph is the patron saint of workers and has several feast days. Mary (mother of Jesus) The Gospel of Luke in the New Testament begins its account of Mary's life with the Annunciation, when the angel Gabriel appeared to her and announced her divine selection to be the mother of Jesus. Although she does not seem to have been present in Jesus' public ministry, Mary was present at the crucifixion and is depicted as a member of the early Christian community in Jerusalem.

Apocryphal writings tell that she never died but assumed into Heaven, both her body and soul in the assumption. Paul the Apostle. Fourteen of the twenty-seven books in the New Testament have traditionally been attributed to Paul, and approximately half of the Acts of the Apostles deals with Paul's life and works. Seven of the epistles are undisputed by scholars as being authentic, with varying degrees of argument about the remainder. The Pauline authorship of the Epistle to the Hebrews, already doubted in the 2nd and 3rd centuries [8] but almost unquestioningly accepted from the 5th to the 16th centuries,[9] is now almost universally rejected by scholars.[10] The other six are believed by some scholars to have come from followers writing in his name, using material from Paul's surviving letters and letters written by him that no longer survive.[5][6][11] Other scholars argue that the idea of a pseudonymous author for the disputed epistles raises many problems.[12] Available sources[edit]

Thomas the Apostle. Thomas the Apostle, sometimes informally called Doubting Thomas or Didymus which means "The Twin", was one of the Twelve Apostles of Jesus Christ, according to the New Testament. He is best known from the account in the Gospel of Saint John, where he questioned Jesus' resurrection when first told of it, followed by his confession of faith as both "My Lord and my God" on seeing and touching Jesus' wounded body. Traditionally, he is said to have traveled outside the Roman Empire to preach the Gospel, traveling as far as India.[5][6] According to tradition, the Apostle reached Muziris, India in 52 AD and baptized several people who are today known as Saint Thomas Christians or Nasranis. Solomon.

According to the Talmud, Solomon is one of the 48 prophets.[4] In the Qur'an, he is considered a major prophet, and Muslims generally refer to him by the Arabic variant Sulayman, son of David. Biblical account[edit] Succession[edit] Attila. Attila (/ˈætɨlə/ or /əˈtɪlə/; ? –453), frequently referred to as Attila the Hun, was the ruler of the Huns from 434 until his death in 453. Genealogy of the US Presidents. Directory of Royal Genealogical Data. At this site I have a database containing the genealogy of the British Royal family and those linked to it via blood or marriage relationships. Henry I of France. Henry I (4 May 1008 – 4 August 1060) was the King of the Franks from 1031 to his death. Charlemagne. King Arthur. Beowulf (hero)

Beowulf (/ˈbeɪ.ɵwʊlf/; Old English: [ˈbeːo̯wʊlf]) is a legendary Geatish hero and later turned king in the epic poem named after him, one of the oldest surviving pieces of literature in the English language. A number of origins have been proposed for the name Beowulf. Henry Sweet, a philologist and early linguist specializing in Germanic languages, proposed that the name Beowulf literally means in Old English "bee-wolf" or "bee-hunter" and that it is a kenning for "bear".[1] This etymology is mirrored in recorded instances of similar names.

Biuuuwulf is recorded as a name in the AD 1031 Liber Vitae. Socrates. Socrates (/ˈsɒkrətiːz/;[2] Greek: Σωκράτης [sɔːkrátɛːs], Sōkrátēs; 470/469 – 399 BC)[1] was a classical Greek (Athenian) philosopher credited as one of the founders of Western philosophy. Xanthippe. An Emblem book print portraying Xanthippe emptying a chamber pot over Socrates, from Emblemata Horatiana illustrated by Otho Vaenius, 1607. Xanthippe (/zænˈθɪpi/; Greek: Ξανθίππη; 5th century – 4th century BCE) was an ancient Athenian, the wife of Socrates and mother of their three sons: Lamprocles, Sophroniscus, and Menexenus.

There are far more stories about her than there are facts. She was likely much younger than Socrates, perhaps by as much as forty years.[1] Name[edit] Xanthippe means "yellow horse", from the Greek ξανθός "xanthos" (blonde) and ἵππος "hippos" (horse). Character[edit] It is the example of the rider who wishes to become an expert horseman: "None of your soft-mouthed, docile animals for me," he says; "the horse for me to own must show some spirit" in the belief, no doubt, if he can manage such an animal, it will be easy enough to deal with every other horse besides. Literary references[edit] Euclid. Hippocrates. Pythagoras. Pythagoras of Samos (/pɪˈθæɡərəs/; Ancient Greek: Πυθαγόρας ὁ Σάμιος Pythagóras ho Sámios “Pythagoras the Samian”, or simply Πυθαγόρας; Πυθαγόρης in Ionian Greek; c. 570 BC – c. 495 BC)[1][2] was an Ionian Greek philosopher, mathematician, and founder of the religious movement called Pythagoreanism.