CNN. The Cable News Network (CNN) is an American basic cable and satellite television channel that is owned by the Turner Broadcasting System division of Time Warner.[1] The 24-hour cable news channel was founded in 1980 by American media proprietor Ted Turner.[2][3] Upon its launch, CNN was the first channel to provide 24-hour television news coverage,[4] and the first all-news television channel in the United States.[5] While the news channel has numerous affiliates, CNN primarily broadcasts from its headquarters at the CNN Center in Atlanta, the Time Warner Center in New York City, and studios in Washington, D.C., and Los Angeles. 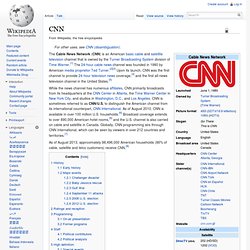 CNN is sometimes referred to as CNN/U.S. to distinguish the American channel from its international counterpart, CNN International. As of August 2010, CNN is available in over 100 million U.S. households.[6] Broadcast coverage extends to over 890,000 American hotel rooms,[6] and the U.S. channel is also carried on cable and satellite in Canada. History Gulf War. Edgar Bronfman, Sr. Edgar Miles Bronfman (June 20, 1929 – December 21, 2013) was a Canadian-American[1][2] businessman and philanthropist,[3][4][5] He was a notable member of the Bronfman family.[6] Biography[edit] Bronfman was born in Montreal into the Jewish Canadian Bronfman family, the son of Samuel Bronfman and Saidye Rosner Bronfman. 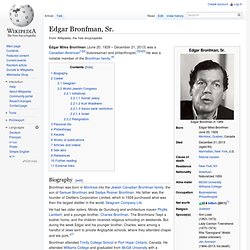 His father was the founder of Distillers Corporation Limited, which in 1928 purchased what was then the largest distiller in the world, Seagram Company Ltd. He had two older sisters, Minda de Gunzburg and architecture maven Phyllis Lambert, and a younger brother, Charles Bronfman. The Bronfmans "kept a kosher home, and the children received religious schooling on weekends. Bronfman attended Trinity College School in Port Hope, Ontario, Canada. American Broadcasting Company. The American Broadcasting Company (ABC) is an American commercial broadcast television network viewed in the United States and Canada. 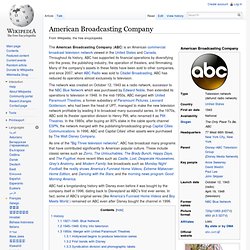 Throughout its history, ABC has supported its financial operations by diversifying into the press, the publishing industry, the operation of theaters, and filmmaking. Many of the company's assets in these fields have been sold to other companies, and since 2007, when ABC Radio was sold to Citadel Broadcasting, ABC has reduced its operations almost exclusively to television. The network was created on October 12, 1943 as a radio network, successor to the NBC Blue Network which was purchased by Edward Noble, then extended its operations to television in 1948. In the mid-1950s, ABC merged with United Paramount Theatres, a former subsidiary of Paramount Pictures.

Leonard Goldenson, who had been the head of UPT, managed to make the new television network profitable by leading it to broadcast many successful series. History[edit] 1927–1945: Blue Network[edit] Sid Bass. Sid Richardson Bass (born April 9, 1942) is an American investor and businessman. 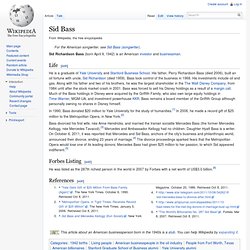 Life[edit] In 1990, Bass donated $20 million to Yale University for the study of humanities.[1] In 2006, he made a record gift of $25 million to the Metropolitan Opera, in New York.[2] Bass divorced his first wife, née Anne Hendricks, and married the Iranian socialite Mercedes Bass (the former Mercedes Kellogg, née Mercedes Tavacoli).[3] Mercedes and Ambassador Kellogg had no children. Daughter Hyatt Bass is a writer. 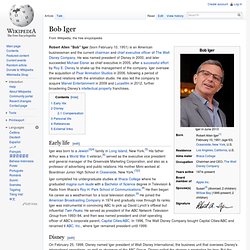 He was named president of Disney in 2000, and later succeeded Michael Eisner as chief executive in 2005, after a successful effort by Roy E. Disney to shake-up the management of the company. Iger oversaw the acquisition of Pixar Animation Studios in 2006, following a period of strained relations with the animation studio. He also led the company to acquire Marvel Entertainment in 2009 and Lucasfilm in 2012, further broadening Disney's intellectual property franchises. Early life[edit] Iger was born to a Jewish[3][4] family in Long Island, New York.[5] His father Arthur was a World War II veteran,[6] served as the executive vice president and general manager of the Greenvale Marketing Corporation, and also as a professor of advertising and public relations. 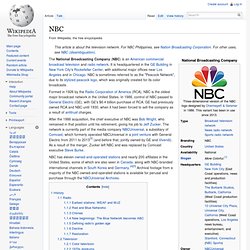 It is headquartered in the GE Building in New York City's Rockefeller Center, with additional major offices near Los Angeles and in Chicago. NBC is sometimes referred to as the "Peacock Network", due to its stylized peacock logo, which was originally created for its color broadcasts. Formed in 1926 by the Radio Corporation of America (RCA), NBC is the oldest major broadcast network in the United States. In 1986, control of NBC passed to General Electric (GE), with GE's $6.4 billion purchase of RCA. GE had previously owned RCA and NBC until 1930, when it had been forced to sell the company as a result of antitrust charges. Brian L. Roberts. Brian L. 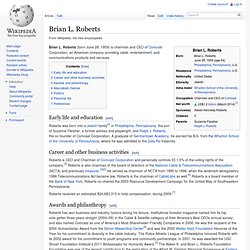 CBS. CBS (corporate name CBS Broadcasting, Inc.) is an American commercial broadcast television network, which started as a radio network; it continues to operate a radio network and a portfolio of television and radio stations in large and mid-sized markets. 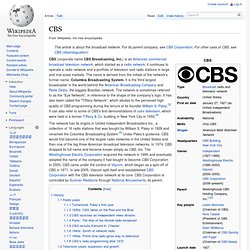 The name is derived from the initials of the network's former name, Columbia Broadcasting System. It is the third largest broadcaster in the world behind the American Broadcasting Company and Rede Globo, the biggest Brazilian network. The network is sometimes referred to as the "Eye Network", in reference to the shape of the company's logo. It has also been called the "Tiffany Network", which alludes to the perceived high quality of CBS programming during the tenure of its founder William S. Paley.[3] It can also refer to some of CBS's first demonstrations of color television, which were held in a former Tiffany & Co. building in New York City in 1950.[4] 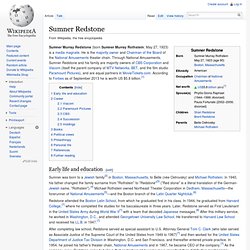 He is the majority owner and Chairman of the Board of the National Amusements theater chain. Through National Amusements, Sumner Redstone and his family are majority owners of CBS Corporation and Viacom (itself the parent company of MTV Networks, BET, and the film studio Paramount Pictures), and are equal partners in MovieTickets.com. According to Forbes as of September 2013 he is worth US $5.8 billion.[1] Early life and education[edit] Redstone attended the Boston Latin School, from which he graduated first in his class. After completing law school, Redstone served as special assistant to U.S.