Pinegrove33. Bernard Chapin - Author and Columnist. Facebook. Mark Dice. Career[edit] In May 2009, Dice self-published The Illuminati: Facts & Fiction discussing the possibility of an Illuminati secret society.[2] The History Channel series Decoded featured Dice, who met with the show's investigators to discuss the Illuminati secret society.[9] He was in the pilot episode of Culture Shock with Mötley Crüe's Tommy Lee,[10] an investigative travel show, but the series was not picked up.[11] He is also featured in Secret Societies of Hollywood on E! 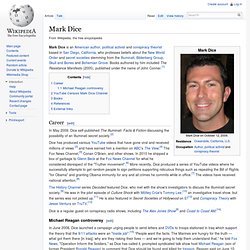 [12] and Conspiracy Theory with Jesse Ventura on TruTV.[13] Dice is a regular guest on conspiracy radio shows, including The Alex Jones Show[8] and Coast to Coast AM.[14] Michael Reagan controversy[edit] In June 2008, Dice launched a campaign urging people to send letters and DVDs to troops stationed in Iraq which support the theory that the 9/11 attacks were an "inside job".[15] “People want the facts. Mark Dice - Official Website - MarkDice.com. MarkDice. Rapper Rick Ross Exposed as a Fake Freemason, Flabby Fat Slot and Identity Thief. 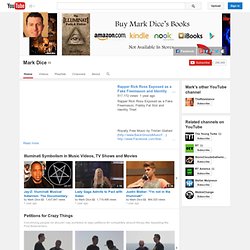 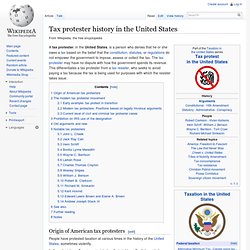 In the colonial era, Americans insisted on their rights as Englishmen to have their own legislature raise all taxes. Tax loads were very light. Beginning in 1765 the British Parliament asserted its supreme authority to lay taxes, and a series of American protests began that led directly to the American Revolution. The first wave of protests attacked the Stamp Act of 1765, and marked the first time Americans from each of the 13 colonies met together and planned a common front against taxes the colonists considered illegal. In 1794, settlers in western Pennsylvania responded to a federal tax on liquor with the Whiskey Rebellion.

The Civil War saw the enactment of the first federal income tax; it was temporary. The Great Depression made tax delinquency widespread during the presidency of Franklin D. The modern tax protester movement[edit] C. 4409. RP4409. 4409 -- NAZI Checkpoint guards go nuts KICK in car door 1,133,724 views 1 year ago READ THIS: A few Nazi Checkpoint / roadblock guards kick in a mans door then lie about it. 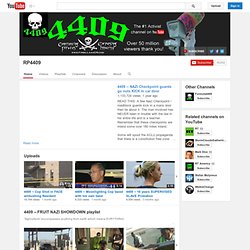 The man involved has NEVER been in trouble with the law in his entire life and is a teacher. Remember that these checkpoints are inland some over 180 miles inland. Some will spout the ACLU propaganda that there is a constitution free zone within 200 miles of the border. These checkpoints are unconstitutional because they are using dogs to check for drugs NOT illegals. Max Igan. Aodscarecrow. Welcome to The CrowHouse. Dirt Rhodes Scholar. Oath Keepers – Guardians of the Republic. Cowboys And GovThugs: The Cows Come Home They mounted up and rode into the face of the BLM’s guns, and by their determination and courage, the cows came home. 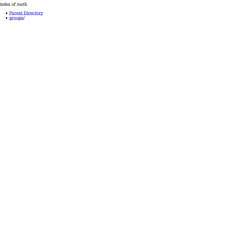 Add this video to your already abundant love for the American spirit. [Continue ...] Posted in VICTORY: Federal Agents Flee Bunkerville Citing “Safety Concerns”… Armed Citizen Militia Stands Down… Over the last two days thousands of supporters have made their way to Bunkerville, Nevada where hundreds Federal government agents had begun rounding up privately owned cattle from public lands and cordoning off protesters into remote desert First Amendment Areas.

[Continue ...] Patriots Celebrate Removal Of BLM Agents From Disputed Nevada Land. OathKeepersOK. David Berry: Eddie & Ada Gilbert: is my old, private blog that is now sadly neglected since I have launched Oath Keepers, which has truly taken off like a rocket, leaving me no time for personal blogging - not that I'm complaining. the Oath Keepers mission is very important, and worth the time and effort. 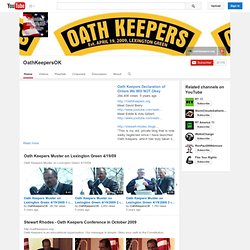 Go here: www.oathkeepers.org However, if you want to see what prompted me to finally launch Oath Keepers, there are several posts on this blog that show my thinking. Back in 2006 I wrote several scathing criticisms of the Bush Administration's absurd and dangerous claims of nearly unlimited executive "war" powers. Those articles built on my research at Yale Law School (where I won the Miller Prize for best paper on the Bill of Rights).

One of the most common refrains I get from Obama supporters is "where were you when Bush was violating the Constitution. " Webster Tarpley. Webster Griffin Tarpley (born 1946) is an American historian, economist, journalist, lecturer and a critic of U.S. foreign and domestic policy. 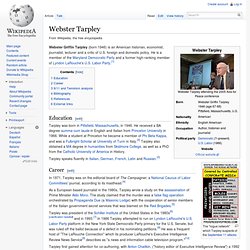 He is a member of the Maryland Democratic Party and a former high-ranking member of Lyndon LaRouche's U.S. Labor Party.[1] Education[edit] Tarpley speaks fluently in Italian, German, French, Latin and Russian.[3] Career[edit] In 1971, Tarpley was on the editorial board of The Campaigner, a National Caucus of Labor Committees' journal, according to its masthead.[4] As a European based journalist in the 1980s, Tarpley wrote a study on the assassination of Prime Minister Aldo Moro. Tarpley was president of the Schiller Institute of the United States in the 1980s[6][clarification needed] and in 1993.[7] In 1986 Tarpley attempted to run on Lyndon LaRouche's U.S. TARPLEY.net. Webster Tarpley Blog. Jason Bermas. Theintelhub. NotForSale2NWO. Stefan Molyneux. Stefan Basil Molyneux (/stɛˈfɑːn ˈmɑːlɪnjuː/; born 24 September 1966) is a Canadian author, blogger, essayist and host of the Freedomain Radio[2] series of podcasts on political philosophy, libertarianism, atheism, ethics, science, history, personal and relationship issues.[3] He is an anarcho-capitalist and atheist. 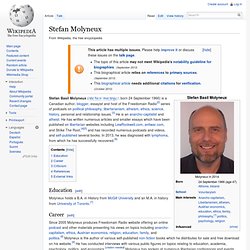 He has written numerous articles and smaller essays which have been published on libertarian websites including LewRockwell.com, antiwar.com, and Strike The Root,[4][5] and has recorded numerous podcasts and videos, and self-published several books. Stefbot. Freedomain Radio – The Home Page. Welcome to Sovereigns, Voluntarists & Free men and women. Benlowreyhimself. Ben Lowrey. The Corbett Report. Corbettreport. Upload Subscription preferences Loading... 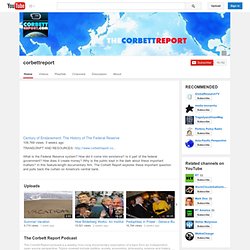 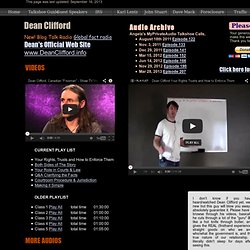 Alim. Dean's Youtube Channel The World Freeman Society. Weavingspider. PRESS FOR TRUTH. Alex Jones (radio host) Alexander Emerick "Alex" Jones (born February 11, 1974) is an American radio host, author, conspiracy theorist[1][2] and documentary filmmaker.[3] His syndicated news/talk show The Alex Jones Show, based in Austin, Texas, airs via the Genesis Communication Network on more than 90 AM, FM, and shortwave radio stations across the United States and on the Internet.[4] His websites include Infowars.com and PrisonPlanet.com.[5][6] His YouTube channel has been viewed over 360 million times.[7] Biography[edit] He began his career in Austin with a live, call-in format public-access television cable TV program.

In July, a group of Austin Community Access Center (ACAC) programmers claimed that Jones used legal proceedings and ACAC policy to intimidate them or get their shows thrown off the air.[25] On September 8, 2007, he was arrested while protesting at 6th Avenue and 48th Street in New York City. TheAlexJonesChannel.

Alex Jones. Planet Infowars. Truth Broadcast Network - The Truth Shall Set You Free! Superbigbadman. Luke Rudkowski. Wearechange. UNIVERSITY The mainstream media has failed us time and time again. Their appalling lack of integrity, tenacity, and spine continues on a daily basis, insulting anyone paying attention. We Are Change is creating a platform where aspiring journalists can achieve success and develop their careers without jumping through degrading corporate hoops. 11 years ago with a cheap camera borrowed from a friend, I dedicated my life to confronting those who repeatedly escaped justice. No longer would the perpetrators of hate and violence continue to walk amongst us without repercussions. We have successfully exposed the hypocrisies of Henry Kissinger, Ben Bernanke, Joe Biden, Mitt Romney, Jacob Rothschild, Mayor Bloomberg, Larry Silverstein, and the Rockefeller family.

Our mission is to create a new generation of journalists, unafraid of institutionalized authority, unafraid to challenge the status quo and preconceived notions. We Are Change is producing a world of dedicated journalists. Be the Change You Wish to See in the World. Adam Kokesh. Adam Charles Kokesh (born February 1, 1982) is an American libertarian talk show host and activist. A decorated veteran of the War in Iraq, he came to disparage war and advocate nonviolent resistance to power. Variously identifying as anarchist, agorist, voluntaryist, Kokesh has called for a "new American revolution" for the "orderly dissolution of the federal government. AdamKokesh. Anchoring the Internet 7 Days a Week. Thetruthergirls. Home Page. Facebook.