Discussion Of Clean Water And Sanitation In The Last 12 Months

The $500 Billion Global Water Crisis: Asia in the Crosshairs – Brink – The Edge of Risk. Indian villagers throw containers attached to ropes into a well to collect their daily supply of potable water after a tanker made its daily delivery at Shahapur, some 130 km southwest of Mumbai, on May 13, 2016. 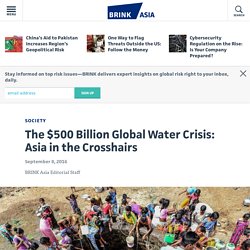 India is officially in the grip of its worst water crisis in years, with the government saying that about 330 million people, or a quarter of the population, are suffering from drought. Photo: Indranil Mukherjee/AFP/Getty Images Water insecurity costs the world 1 percent or more of its GDP—amounting to $500 billion—annually, and the problem is particularly pronounced in Asia where 1.7 billion people still don’t have access to basic sanitation, hundreds of millions don’t have clean water to drink and droughts and floods ravage communities year after year. The recently published Asian Water Development Outlook 2016 by the Asian Development Bank (ADB) throws light on these staggering numbers that illustrate how acute the problem is in Asia. More water for the world. 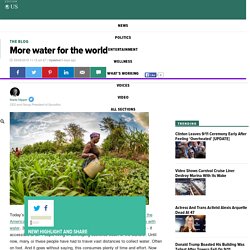 A milestone day. Today, we, in cooperation with the American NGO World Vision, can celebrate having reached 300,000 people with water. 300,000 new people, for whom water haven’t been easily accessible - if accessible at all. People living in developing societies south of the Sahara . Until now, many of these people have had to travel vast distances to collect water. Often on foot. World Vision has played a tremendous part in making this reality. However, this significant milestone we and World Vision can feel proud about, is not where our journey stops. Adding to that, I personally feel very good about the fact that this partnership puts further thrust to the UN’s immensely important and ambitious Sustainable Development Goals. Ghanaian children still vulnerable to water and sanitation related deaths. This was due to the fact that “less than two in every five Ghanaians is drinking safe water, and one in every six households does not have a basic water supply within a 30-minute round trip,” said a press release issued here by the UNICEF Country Office on Wednesday. 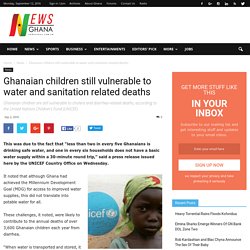 It noted that although Ghana had achieved the Millennium Development Goal (MDG) for access to improved water supplies, this did not translate into potable water for all. These challenges, it noted, were likely to contribute to the annual deaths of over 3,600 Ghanaian children each year from diarrhea. “When water is transported and stored, it increases the risk to be fecally contaminated. “This in turn increases the risk of diarrheal disease, which is a leading cause of chronic malnutrition or stunting and the fourth cause of death among children under five, with 300,000 deaths per year due to poor sanitation, poor hygiene or unsafe drinking water,” said the release. Source: Xinhua/News Ghana.

Kosmos Energy Invests In Water For Communities. Thousands in communities in the Central, Greater Accra and Eastern regions have benefited from potable water supply under the Kosmos Energy, Ghana small town water project as part of its social investment plan.This follows a successful completion of a similar water project by the company, which saw the construction of water stations that brought clean, safe water to 19 communities in its operation districts in the Western region.Speaking at the handing over of the completed water systems in Amanase in the Eastern Region and Kwabenya in the Greater Accra Region and Nyanyaano in the Central Region, Mr. 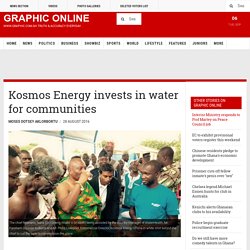 Philip Liverpool, the Commercial Director, Kosmos Energy Ghana said the projects was part of its social Investment initiative to provide clean potable water communities. He said Kosmos was working with its social investment partners have extended its footprint to 31-sites across the country proving potable water serving more than 450,000 people so far. It’s a fallacy that all Australians have access to clean water, sanitation and hygiene. Nations are gathering in New York this week to discuss the UN Sustainable Development Goals (SDGs), which aim to improve health, wealth and well-being for countries both rich and poor. 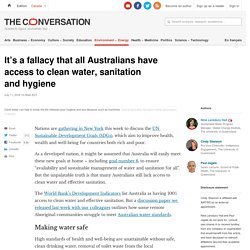 As a developed nation, it might be assumed that Australia will easily meet these new goals at home – including goal number 6, to ensure “availability and sustainable management of water and sanitation for all”. But the unpalatable truth is that many Australians still lack access to clean water and effective sanitation. The World Bank’s Development Indicators list Australia as having 100% access to clean water and effective sanitation. But a discussion paper we released last week with our colleagues outlines how some remote Aboriginal communities struggle to meet Australian water standards. Clean Water For All - The Hindu. The United Nations discussed and passed a non-binding resolution to set an agenda primarily to eradicate poverty and develop an action plan for people, planet and prosperity, as it calls it. 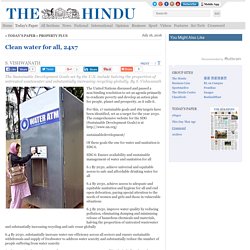 For this, 17 sustainable goals and 169 targets have been identified, set as a target for the year 2030. The comprehensive website for the SDG (Sustainable Development Goals) is at sustainabledevelopment/ Nigeria: Ministers Adopt Africa's Roadmap for Water Security, Sanitation. By Chinedum Uwaegbulam. 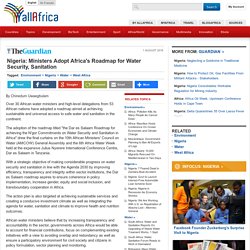