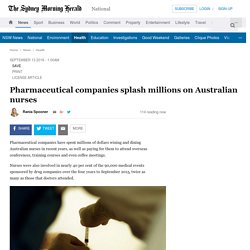 Nurses were also involved in nearly 40 per cent of the 90,000 medical events sponsored by drug companies over the four years to September 2015, twice as many as those that doctors attended. The cash splash was revealed after academic analysis of member data reported by industry group Medicines Australia and has raised concerns that it could influence decision-making. It showed of $12.5 million spent on functions for nurses about $3 million was for "food and beverages". The remainder was spent on things such as conference sponsorship, flights and accommodation.

"The concern is that the promotional activities of these industries are going to influence decision-making about patient care or treatment in ways that might not be evidence based, safe or effective. " Labor unveils nurse training package as campaign arm-wrestle on health continues. Labor has pledged to help establish an advanced nursing masters course, use it to train 10 public health nurses a year, and offer post-graduate scholarships to 39 others. 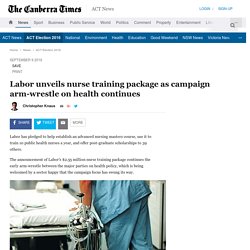 The announcement of Labor's $2.55 million nurse training package continues the early arm-wrestle between the major parties on health policy, which is being welcomed by a sector happy that the campaign focus has swung its way. Last month, the Liberals announced a major $395 million upgrade to Canberra Hospital, and two small satellite hospitals in Tuggeranong and Gungahlin. Labor countered this week with its $650 million health package, which would see a new building at the Canberra Hospital, a new emergency department, and an expansion of the recently completed women and children's hospital. Chief Minister Andrew Barr has now announced Labor would work with the University of Canberra to establish a course for nurse practitioners, a masters degree qualification which is currently unavailable in the ACT.

Workforce. Health workforce The health workforce in Australia is large and diverse, covering many occupations, ranging from highly qualified professionals to support staff and volunteers. 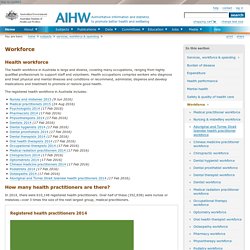 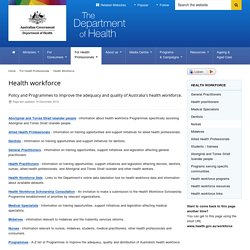 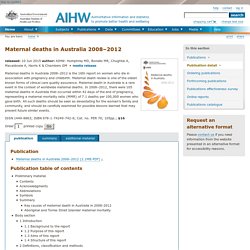 Maternal death review is one of the oldest known forms of clinical care quality assurance. Maternal death in Australia is a rare event in the context of worldwide maternal deaths. In 2008–2012, there were 105 maternal deaths in Australia that occurred within 42 days of the end of pregnancy, representing a maternal mortality ratio (MMR) of 7.1 deaths per 100,000 women who gave birth. All such deaths should be seen as devastating for the woman’s family and community, and should be carefully examined for possible lessons learned that may prevent future similar events. Sue Desmond-Hellmann: A smarter, more precise way to think about public health.

How can Australia do better for Indigenous health? Respect, tolerance and trust in Aboriginal and Torres Strait Islander people are needed from government to improve the health and wellbeing of Indigenous Australians Reflecting back over 30 years of working in Indigenous health, I think that it has been a time of change rather than improvement. 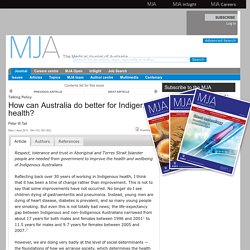 This is not to say that some improvements have not occurred. No longer do I see children dying of gastroenteritis and pneumonia. Instead, young men are dying of heart disease, diabetes is prevalent, and so many young people are smoking. Improving the health of Indigenous Australians: reforms in nursing education. An opinion piece of international interest - Turale - 2006 - International Nursing Review. 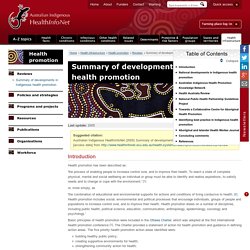 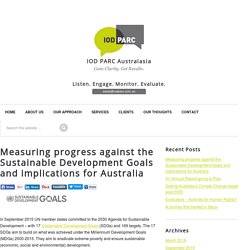 The 17 SDGs aim to build on what was achieved under the Millennium Development Goals (MDGs) 2000-2015. They aim to eradicate extreme poverty and ensure sustainable (economic, social and environmental) development. This agenda is incredibly ambitious. Where the MDGs focused on improving the livelihoods of the poorest and most vulnerable in developing countries, the SDGs apply to all member states. 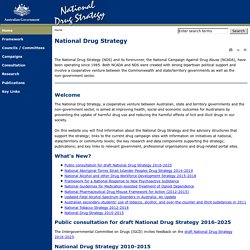 Both NCADA and NDS were created with strong bipartisan political support and involve a cooperative venture between the Commonwealth and state/territory governments as well as the non-government sector. Welcome The National Drug Strategy, a cooperative venture between Australian, state and territory governments and the non-government sector, is aimed at improving health, social and economic outcomes for Australians by preventing the uptake of harmful drug use and reducing the harmful effects of licit and illicit drugs in our society. 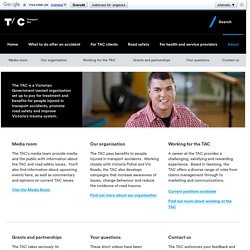 You'll also find information about upcoming events here, as well as commentary and opinions on current TAC issues. Visit the Media Room. Indigenous health. 7.0 Introduction While there have been improvements in the health and wellbeing of Aboriginal and Torres Strait Islander Australians in recent years, some long-standing challenges remain. (To acknowledge the separate Indigenous peoples of Australia, the term 'Aboriginal and Torres Strait Islander people' is preferred in AIHW publications—however, the term 'Indigenous' is used interchangeably when referring to Indigenous status or when it assists readability.) Australian Road Deaths Database. The Australian Road Deaths Database provides basic details of road transport crash fatalities in Australia as reported by the police each month to the State and Territory road safety authorities.

Details provided in the database fall into two groups: the circumstances of the crash, for example, date, location, crash typesome details regarding the persons killed, for example, age, gender and road user group. Alcohol use (NDSHS 2013 key findings) The consumption of alcohol is widespread within Australia and entwined with many social and cultural activities. Current use and trends Daily drinking declined significantly between 2010 and 2013 (from 7.2% to 6.5%) and was at the lowest level seen since 1991. Rates fell for both males and females.Between 2010 and 2013, there was a significant increase in the proportion of people who had never consumed a full serve of alcohol (from 12.1% to 13.8%).

Statistics - Drug Prevention & Alcohol Facts. Below is a brief outline of some important Australian statistics on drugs. Find more statistics: Statistics by drug: Statistics by topic: Overdose. Mindhealthconnect. There are many treatment options available for addictions and substance abuse, ranging from counselling through to hospital treatment depending on which substance is used and how serious the dependence is. Mild substance abuse can be treated by simple counselling and lifestyle changes. Severe dependency on substances like alcohol and heroin can require treatment in a hospital. Detoxification means stopping the substance and having medical treatment until the substance has cleared from the bloodstream. From Policy to Action. Home — Roll Back Malaria.