Crazy – right? I had all the parts, so really the only thing holding me back until this point was a deadline. According to Parkinson’s Law “work expands so as to fill the time available for its completion” so at two weeks, I didn’t have much time for expansion. I started on some conceptual CAD work for the project before so I had a *slight* idea of what I was doing. Machining the frame on the CNC machine. I later learned I didn’t have room for all this foam tape! After drilling a hole on each side of the slot, I used a coping saw to clear out the rest of the wood. A strip of sand paper was used to smooth out the cut marks on the slot. Test fit of all components. Test fitting. 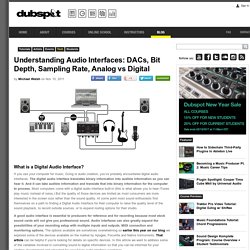 If you use your computer for music, DJing or audio creation, you’ve probably encountered digital audio interfaces. The digital audio interface translates binary information into audible information so you can hear it. And it can take audible information and translate that into binary information for the computer to process. Most computers come with a digital audio interface built-in (this is what allows you to hear iTunes play music instead of noise.) But the quality of those devices are limited as most consumers are more interested in the screen size rather than the sound quality. A good audio interface is essential to producers for reference and for recording because most stock sound cards will not give you professional sound. Analog vs Digital Audio You’ve most likely encountered conversations regarding analog vs digital sound (vinyl vs MP3, for instance) - it’s a widely debated topic online and amongst music and audio enthusiasts. 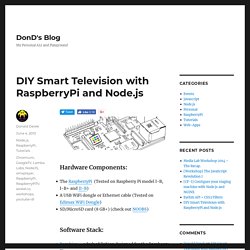 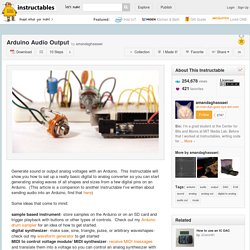 " Since the Arduino does not have analog out capabilities, we need to use a DAC to convert digital data (numbers/ints/bytes) to an analog waveform (oscillating voltage). A simple, easy to program, and cheap way to do this is to use something called an R2R resistor ladder. Essentially, it takes incoming digital bits (0V and 5V from Arduino), weights them, and sums them to produce a voltage between 0 and 5 volts (see the schematic in fig 2, taken from the Wikipedia resistor ladder page). You can think of a resistor ladder as a multi-leveled voltage divider. The resistor ladder I'll be demonstrating in this tutorial is an 8-bit DAC, this means it can produce 256 (2^8) different voltage levels between 0 and 5v. I like using these resistor ladder DACs because I always have the materials around, they're cheap, and I think they're kind of fun, but they will not give you the highest quality audio. BeagleBoneBlack.