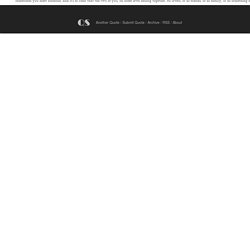 20 Things Men Do That Women Probably Don't Know About. #15 Is Gross But So True. 35 Tumblr Posts That Will Make You Reevaluate Existence. The 20 Most Eerily Convincing Paranormal Videos on YouTube. Temptotosssoon comments on Have you ever felt a deep personal connection to a person you met in a dream only to wake up feeling terrible because you realize they never existed? The Russian Sleep Experiment. Russian researchers in the late 1940’s kept five people awake for fifteen days using an experimental gas based stimulant. 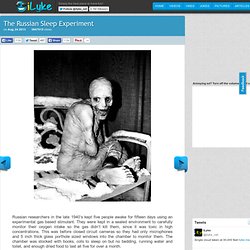 They were kept in a sealed environment to carefully monitor their oxygen intake so the gas didn’t kill them, since it was toxic in high concentrations. This was before closed circuit cameras so they had only microphones and 5 inch thick glass porthole sized windows into the chamber to monitor them. The chamber was stocked with books, cots to sleep on but no bedding, running water and toilet, and enough dried food to last all five for over a month. The test subjects were political prisoners deemed enemies of the state during world war II. Everything was fine for the first 5 days, the subjects hardly complained having been promised (falsely) that they would be freed if they submitted to the test and did not sleep for 30 days.

After nine days the first of them started screaming. So did the whispering to the microphones. After 3 more days passed. The subject smiled. 22 Insanely Desperate Text Messages (NSFW) from Funny Or Die, Kirill Was Here, and Dashiell Driscoll. Sanskriti - Culture of India. Nathuram Godse was arrested immediately after he assassinated Gandhiji, based on a F. 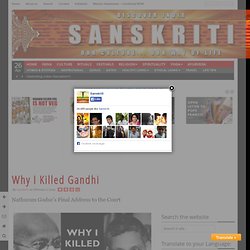 I. R. filed by Nandlal Mehta at the Tughlak Road Police station at Delhi . The trial, which was held in camera, began on May 27, 1948 and concluded on February 10, 1949. He was sentenced to death. An appeal to the Punjab High Court, then in session at Simla, did not find favour and the sentence was upheld. Such was the power and eloquence of this statement that one of the judges, G. Born in a devotional Brahmin family, I instinctively came to revere Hindu religion, Hindu history and Hindu culture. I used publicly to take part in organized anti-caste dinners in which thousands of Hindus, Brahmins, Kshatriyas, Vaisyas, Chamars and Bhangis participated. All this reading and thinking led me to believe it was my first duty to serve Hindudom and Hindus both as a patriot and as a world citizen.

Against such an attitude there can be no halfway house. Gandhi is being referred to as the Father of the Nation. Student Is Asked About "Hell" On An Exam. You've Gotta Read His Answer. This Cleverly Designed Box is Hiding a Whole Room Inside. Looks can be deceiving… so make sure to never underestimate someone’s creativity. 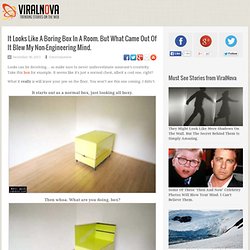 Take this box for example. It seems like it’s just a normal chest, albeit a cool one, right? What it really is will leave your jaw on the floor. You won’t see this one coming. I didn’t. It starts out as a normal box, just looking all boxy. Then whoa. It’s transforming into something. I still don’t know what. But it’s getting interesting. Okay, that’s definitely a desk that just seemed to come out of thin air. More boxes within boxes. Within boxes. A closet appears to be forming in the corner… And some kind of shelving to the right. And a… could it be…? For real? That’s definitely a bed being produced before my very eyes. The Best Birth Control In The World Is For Men. By Jon Clinkenbeard. 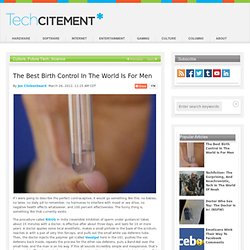 March 26, 2012, 11:25 AM CDT17K If I were going to describe the perfect contraceptive, it would go something like this: no babies, no latex, no daily pill to remember, no hormones to interfere with mood or sex drive, no negative health effects whatsoever, and 100 percent effectiveness. The funny thing is, something like that currently exists. The procedure called RISUG in India (reversible inhibition of sperm under guidance) takes about 15 minutes with a doctor, is effective after about three days, and lasts for 10 or more years.

A doctor applies some local anesthetic, makes a small pinhole in the base of the scrotum, reaches in with a pair of very thin forceps, and pulls out the small white vas deferens tube. The two common chemicals — styrene maleic anhydride and dimethyl sulfoxide — form a polymer that thickens over the next 72 hours, much like a pliable epoxy, but the purpose of these chemicals isn’t to harden and block the vas deferens. About Jon Clinkenbeard. Meeting God. MY DOG RAMBO. 18 Existential Shower Thoughts That Will Change Your Entire Day.