Teacher wins UK poetry prize with poem on dual heritage. A startling poem with allusions to a rich range of subjects ranging from Salvador Dalí and the Bible to an abused footballer, a revered hip-hop band and the Welsh language has won a prestigious literary award. 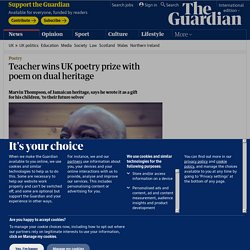 ‘A box of light’: AI inspired by British verse attempts to write poetry. Rare is the poet who has failed to tackle the glory of trees, whether it’s Joyce Kilmer (“I think that I shall never see / A poem lovely as a tree”) or Philip Larkin (“the unresting castles thresh / In fullgrown thickness every May”). 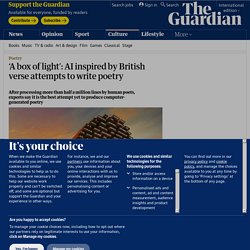 Now an artificial intelligence trained by experts on more than half a million lines of poetry has had a stab, coming up with the almost-comprehensible image of a “box of light that had been a tree”. The algorithm, which those behind it believe is the best attempt to date at training an artificial intelligence to write poetry, was fed lines from more than 100 British contemporary poets as inspiration, learning from the style of poets such as Simon Armitage and Alice Oswald. It was then given “seed words”, from which it would generate couplets based on its understanding of what poetry was. Experts from the Poetry Society, Poetry Archive and Scottish Poetry Library then filtered through tens of thousands of couplets to highlight what did, and didn’t, work. The Guardian view on the picture book: not just for children. While anglophone fans await a translation of her 1,100-page magnum opus, the Nobel-prizewinning Polish novelist Olga Tokarczuk has a picture book out. 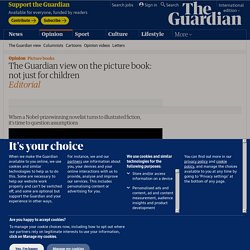 She created her story, The Lost Soul, with artist Joanna Concejo. At 48 pages it is certainly slender compared with her epic historical novel, The Books of Jacob, which will be published in English in November. Booksellers. Four months since it launched, Bookshop.org – billed as an alternative to Amazon – has generated £1m in profit for independent bookshops in the UK, the website announced on Monday. 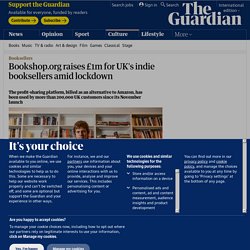 Set up by Andy Hunter, the writer and co-founder of Literary Hub, Bookshop.org was launched in the US a year ago and in the UK in November. Pitching itself as a socially conscious way to buy books online, it allows booksellers to create a virtual shop front, receiving 30% of the cover price from each sale without having to handle customer service or shipping. A joy forever: poetry world prepares to mark bicentenary of John Keats. Almost 200 years ago, on 23 February 1821, the English poet John Keats died of tuberculosis in Rome at the age of 25. 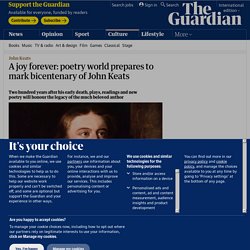 “I shall soon be laid in the quiet grave – thank God for the quiet grave,” he told his friend Joseph Severn, in whose arms he died. “I can feel the cold earth upon me – the daisies growing over me – O for this quiet – it will be my first.” Keats gave instructions for his headstone to be engraved with the words “here lies one whose name was writ in water”, and visitors to Rome’s Protestant cemetery can still make a pilgrimage to see it today. Buffy stars say Joss Whedon created 'toxic environment' on show. Joss Whedon, the writer and director whose credits include Avengers, Justice League and Agents of Shield, has been accused of creating a “toxic environment ” by actors who worked with him on Buffy the Vampire Slayer. 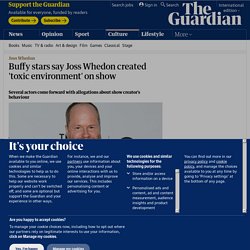 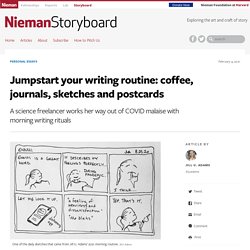 However, I did launch a new morning routine. Every morning I get up, make coffee, get the woodstove going, sit in my reading chair, and: write three pages in my journal;draw a cartoon character; andwrite a postcard. First, a brief introduction: I am a science journalist who writes about health, but not breaking news health. The Assault on Truth by Peter Oborne review – Boris Johnson's lies. Professor Avi Loeb: 'It would be arrogant to think we're alone in the universe' By the time humanity noticed the object, it was already leaving the galaxy. 19 October 2017. 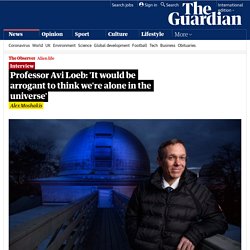 Astronomers at the University of Hawaii notice an odd shape tumbling away from Earth, a bright speck hurtling through the deep dark. Informally, they name it ‘Oumuamua, from the Hawaiian for “scout”, and classify it an interstellar asteroid, the first known to visit our solar system. 'Utterly original' Monique Roffey wins Costa book of the year. Bookshops defy pandemic to record highest sales for eight years. More than 200m print books were sold in the UK last year, the first time since 2012 that number has been exceeded, according to an estimate from official book sales monitor Nielsen BookScan. 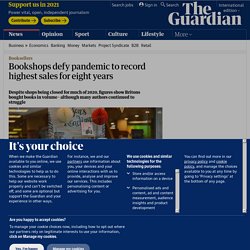 Despite the coronavirus pandemic causing a series of lockdowns around the country – bookshops in England were closed from 23 March until 15 June, and then again from 5 November until 2 December, with differing lockdowns in place around the rest of the UK – Nielsen has estimated that the volume of print books sold grew by 5.2% compared with 2019. This equates to 202m books being sold in the UK last year and was worth £1.76bn, up 5.5% on 2019, said Nielsen. The Bookseller magazine said the figure represented the biggest volume rise in the books market since 2007, and the highest annual value since 2009.

Indie bookshops defy Covid to record highest numbers for seven years. Jane James was a freelance bookkeeper until the pandemic hit and most of her business disappeared. 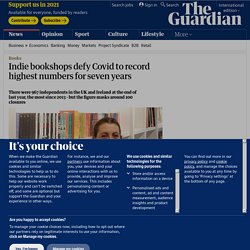 Rather than waiting for it to trickle back, she decided to embark on a dream she’d held for more than a decade and open her own independent bookshop in Thetford, Norfolk. She’s not the only one. Last year might have seemed like a strange time to launch a new business, but according to figures from the Booksellers Association, more than 50 new bookshops were opened in 2020, taking the body’s independent bookshop membership to 967 shops in the UK and Ireland. This is up from 890 shops in 2019, 883 in 2018 and 868 in 2017. 2021 in books: what to look forward to this year. 4 Winners of five Costa category awards announced.8 The Father released – Florian Zeller directs an adaptation of his own play, starring Anthony Hopkins.11 TS Eliot prize for poetry.19 Centenary of the birth of Patricia Highsmith, queen of psychological suspense.22 Netflix adaptation of Aravind Adiga’s Booker winner The White Tiger.Release of film Chaos Walking, based on first book of Patrick Ness’s eponymous trilogy.26 Costa awards ceremony, with book of the year announced.

Fiction. Onion-style Arabic satirical news website launches English edition. A groundbreaking Arabic satirical news site that skewers the Middle East’s politicians and pieties – dodging the ire of hostile governments and their online supporters – has launched an English language edition. Al-Hudood (the Limits), with deadpan headlines reminiscent of the US publication the Onion, has rankled authorities in the Arab world since launching in 2013. It gives new audiences a taste of groundbreaking humour that ranges from dry (“Students at local school memorise lesson in independent thinking”) to dark (“Intelligence service corrects beliefs of man who thought he only feared God”) to pitch-black (“Syrian dies of natural causes”).

“People have gone numb to all the horrors that are around us, and we are trying to get them to look at things from a new angle,” said Isam Uraiqat, the website’s London-based editor-in-chief. His team of about 15 people, most working from the Jordanian capital, Amman, hold an editorial meeting every weekday to discuss new stories. Douglas Stuart's Booker win heralds the arrival of a fully formed voice. Though there were four debuts on the Booker shortlist, it’s been more than a decade since a debut won. And with two magisterial novels from established writers in Maaza Mengiste’s The Shadow King and Tsitsi Dangarembga’s This Mournable Body on the list, first-timer Douglas Stuart’s success may come as a surprise. Hundreds of authors join signing initiative to support local bookshops. From standup to stanzas: Frank Skinner's terrific guide to poetry. 'He returned to what he really was': Clive James's daughter on his poetic farewell. Ten months before his death last year at the age of 80, Clive James underwent an eight-hour operation to remove a tumour on his face.

Already very frail – he had been suffering from leukaemia for a decade – afterwards it took him almost a week to emerge fully into consciousness. Clive James: 'The poems I remember are the milestones marking the journey of my life' 'Writing was just for fun then': Simon Armitage on writing Zoom! Margaret Atwood wins Dayton literary peace prize.

US Army's conversational AI system to get soldiers and robots talking. Reading a book you hate? Stop right now. Scientists Present a Theory Explaining Why We’re the Only Humans on Earth. Michael Rosen home from intensive care after coronavirus. Coronavirus has left small publishers desperately fighting for survival. William Wordsworth's 250th anniversary marked with mass readings. Cultural clash: the trouble with writing about the lives of others. The Inevitable End of Every Footpath - an essay by Richard Jefferies - Notting Hill Editions. Episode 92 – How to Write Fiction: Boring Writing, Flashbacks, Dream Premonitions and Pre-Climax Info Dumps.