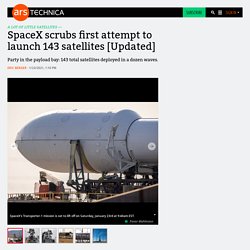 Its payload of 143 satellites were ready. But Mother Nature was not ready. Although SpaceX pressed ahead with fueling of the Falcon 9 booster on Saturday morning, the company scrubbed the launch attempt of the Transporter-1 mission a few minutes before the window opened due to weather. Conditions at Cape Canaveral violated the electrical field rule for a safe launch. The company now plans to try to launch again on Sunday morning, with the launch window opening at 10am ET (15:00 UTC).

Original post: As early as Saturday morning, SpaceX will launch the first dedicated mission of a rideshare program it announced in late 2019. There seems to have been a fair amount of interest in the program, which offered a very low price of $15,000 per kilogram delivered to a Sun-synchronous orbit. 2018 in spaceflight. 2018 is expected to bring a number of milestones in spaceflight. 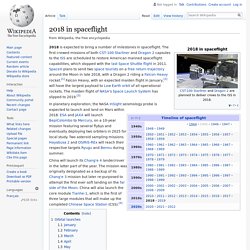 The first crewed missions of both CST-100 Starliner and Dragon 2 capsules to the ISS are scheduled to restore American manned spaceflight capabilities, which stopped with the last Space Shuttle flight in 2011. SpaceX plans to send two space tourists on a free return trajectory around the Moon in late 2018, with a Dragon 2 riding a Falcon Heavy rocket.[1] Falcon Heavy, with an expected maiden flight in January,[2] will have the largest payload to Low Earth orbit of all operational rockets.

The maiden flight of NASA's Space Launch System has slipped to 2019.[3] China will launch its Chang'e 4 lander/rover in the latter part of the year. The mission was originally designated as a backup of its Chang'e 3 mission but later re-purposed to attempt the first ever soft landing on the far side of the Moon. Orbital launches[edit] Suborbital flights[edit] Deep-space rendezvous[edit] Extravehicular activities (EVAs)[edit] Notes[edit] 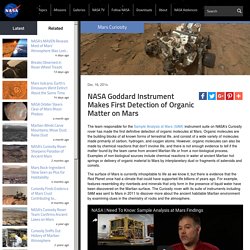 Positioned in an orbit above the Red Planet, MAVEN will study the upper atmosphere of Mars in unprecedented detail. Credits: NASA/Kim Shiflett This artist’s concept shows NASA's Mars Atmosphere and Volatile Evolution, or MAVEN, spacecraft in orbit around the Red Planet. Credits: NASA The Mariner 4 spacecraft was assembled by engineers and technicians at the Jet Propulsion Laboratory in Pasadena, California. Credits: NASA/Jet Propulsion Laboratory NASA’s Mariner 4 spacecraft lifts off Launch Pad 12 at Cape Canaveral Air Force Station atop an Atlas Agena rocket on Nov. 28, 1964. On July 15, 1965, Mariner 4 transmitted this image of the Martian surface from 7,829 miles away. 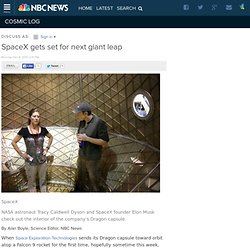 By Alan Boyle, Science Editor, NBC News When Space Exploration Technologies sends its Dragon capsule toward orbit atop a Falcon 9 rocket for the first time, hopefully sometime this week, the spaceship company's founder figures it will have only about a 60 percent chance of coming back down successfully. But for some reason, SpaceX CEO Elon Musk says he's feeling "calmer about this flight" than he did about the last one, back in June, when the Falcon 9 made its debut. For one thing, he's not having recurring nightmares about rockets crashing and burning. "There was something about me that couldn't just quite believe that I was the designer of a million-pound-class vehicle," he told me on Sunday. The Falcon 9's maiden launch turned out to be nearly flawless. What are the chances? But of course he's hoping for 100 percent. Why does he do it? Factsheets : EVOLVED EXPENDABLE LAUNCH VEHICLE (EELV) 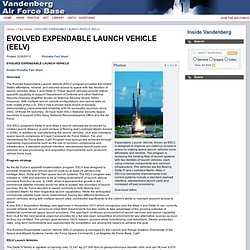 These launch vehicles provide critical spacelift capability to support Department of Defense and other National Security missions (together known as National Security Space (NSS) missions). With multiple launch vehicle configurations and launch sites on both coasts of the U.S., EELV has a proven track record of success, demonstrating unprecedented reliability with 54 successful launches since 2002. Of those 54 launches, 30 have been EELV National Security Space launches in support of the Navy, National Reconnaissance Office and the Air Force. The EELV program's Delta IV and Atlas V launch vehicles are produced by United Launch Alliance (a joint venture of Boeing and Lockheed Martin formed in 2006). Program strategy. Keck Institute for Space Studies.