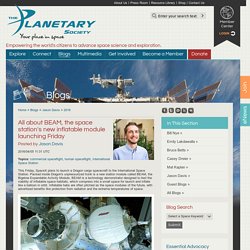 BEAM Me Up: NASA to Send Inflatable Living Module to the ISS. You know what’s harder than launching something into space? 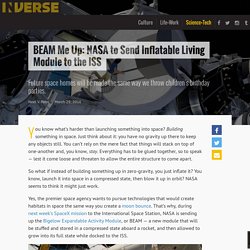 Building something in space. Just think about it: you have no gravity up there to keep any objects still. You can’t rely on the mere fact that things will stack on top of one-another and, you know, stay. Everything has to be glued together, so to speak — lest it come loose and threaten to allow the entire structure to come apart. So what if instead of building something up in zero-gravity, you just inflate it? Inflatable Habitats: From the Space Station to the Moon and Mars? The upcoming launch of a private inflatable module toward the International Space Station could help pave the way for colonies on the moon and Mars. 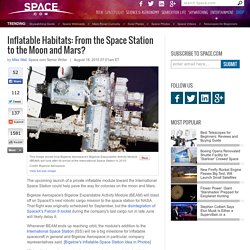 Bigelow Aerospace's Bigelow Expandable Activity Module (BEAM) will blast off on SpaceX's next robotic cargo mission to the space station for NASA. That flight was originally scheduled for September, but the disintegration of SpaceX's Falcon 9 rocket during the company's last cargo run in late June will likely delay it. Bigelow has competition. I got a press release yesterday from a new venture to build what's being billed as the first commercial space station. 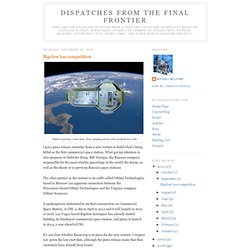 What got my attention is who proposes to build the thing: RSC Energia, the Russian company responsible for the most reliable spaceships in the world, the Soyuz, as well as the dozen or so previous Russian space stations. The other partner in the venture is an outfit called Orbital Technologies, based in Moscow (no apparent connection between the Wisconsin-based Orbital Technologies and the Virginia company Orbital Sciences). A spokesperson elaborated to me that construction on Commercial Space Station, or CSS, is due to start in 2012 and it will launch in 2015 or 2016. Las Vegas-based Bigelow Aerospace has already started building its Sundancer commercial space station, and plans to launch in 2014, a year ahead of CSS. It's not clear whether financing is in place for the new venture. Work With NASA On The Space Structures Of The Future. [image-51] NASA is seeking to advance a technology with the potential to drastically change how we envision transporting and safeguarding astronauts: inflatable structures. 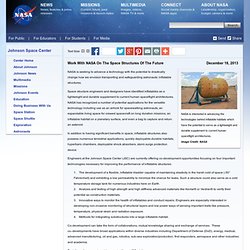 Space structure engineers and designers have identified inflatables as a lightweight and durable supplement to current human spaceflight architectures. NASA has recognized a number of potential applications for the versatile technology including use as an airlock for spacewalking astronauts, an expandable living space for crewed spacecraft on long duration missions, an inflatable habitat on a planetary surface, and even a bag to capture and return an asteroid. In addition to having significant benefits in space, inflatable structures also possess numerous terrestrial applications; quickly deployable-durable habitats, hyperbaric chambers, deployable shock absorbers, storm surge protection device Co-development can take the form of collaborations, mutual knowledge sharing and exchange of services.

Moon Mining Rush Ahead? The Man Who Sold the Moon? 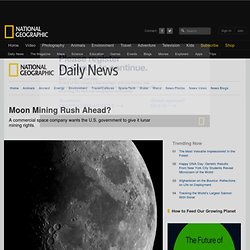 A private space company's chief, Robert Bigelow of Bigelow Aerospace Inc., called for the Federal Aviation Administration to allow property rights for lunar mining, at a Tuesday NASA briefing. The North Las Vegas, Nevada-based firm already has a contract, announced in January, to provide the U.S. space agency with an experimental inflatable habitat for the International Space Station in 2015. Now Bigelow, 69, wants private space companies (such as his own and Elon Musk's SpaceX rocket firm) to take a larger role in expanding NASA's astronaut explorations to beyond the space station's orbit. (See "Moon Exploration. ") And he wants the U.S. government to offer those firms a potential payoff—rights to mine the moon, echoing recent calls to mine asteroids. Moon Base Miners "Ultimately, permanent lunar bases will have to be anchored to permanent commercial facilities," he said. 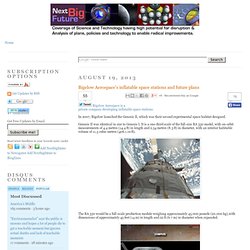 In 2007, Bigelow launched the Genesis II, which was their second experimental space habitat designed. Genesis II was identical in size to Genesis I. It is a one-third scale of the full-size BA 330 model, with on-orbit measurements of 4.4 metres (14.4 ft) in length and 2.54 metres (8.3 ft) in diameter, with an interior habitable volume of 11.5 cubic metres (406.1 cu ft). The BA 330 would be a full-scale production module weighing approximately 43,000 pounds (20,000 kg),with dimensions of approximately 45 feet (14 m) in length and 22 ft (6.7 m) in diameter when expanded. BA 339 compared a ISS Destiny In December 2012, Bigelow began development work on Bigelow Expandable Activity Module (BEAM) under a $17.8 million NASA contract. Future plans awaiting low cost launch capability.