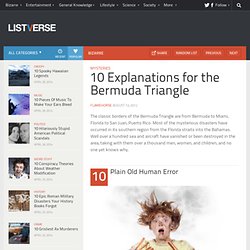 Most of the mysterious disasters have occurred in its southern region from the Florida straits into the Bahamas. Well over a hundred sea and aircraft have vanished or been destroyed in the area, taking with them over a thousand men, women, and children, and no one yet knows why. Because it isn’t exactly a dramatic revelation, human error makes only 10th place (they get more interesting). In terms of probability, those who have no interest in the supernatural — or as yet misunderstood science — will usually stop with all the ships and planes wrecking in the Triangle as a result solely of human error. Humans make a lot of them. A rescue party of 13 in a PBM Mariner was dispatched to search, but this plane is thought to have blown up in mid-air from an unknown cause. JFK assassination film - The wound mistake.

JFK assassination film hoax The wound mistake The Zapruder film seems to show the front of JFK’s head being blasted open by a shot: Researchers like Stewart Galanor, who were lucky enough to see the film in the 1960s (at a private screening in the U.S. 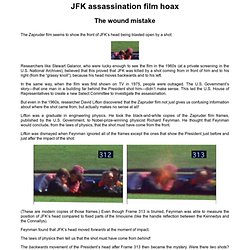 National Archives), believed that this proved that JFK was killed by a shot coming from in front of him and to his right (from the “grassy knoll”), because his head moves backwards and to his left. Is There Really a Conspiracy to Suppress Cancer Cures? Michael Higgins The world of "alternative" cancer treatments abounds with claims like these: “The war on cancer is largely a fraud.” 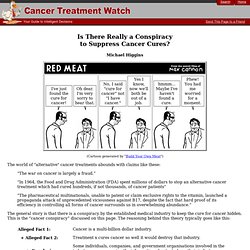 “In 1964, the Food and Drug Administration (FDA) spent millions of dollars to stop an alternative cancer treatment which had cured hundreds, if not thousands, of cancer patients” “The pharmaceutical multinationals, unable to patent or claim exclusive rights to the vitamin, launched a propaganda attack of unprecedented viciousness against B17, despite the fact that hard proof of its efficiency in controlling all forms of cancer surrounds us in overwhelming abundance.” The general story is that there is a conspiracy by the established medical industry to keep the cure for cancer hidden. This is the “cancer conspiracy” discussed on this page. 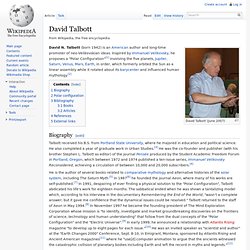 Talbott (born 1942) is an American author and long-time promoter of neo-Velikovskian ideas. Inspired by Immanuel Velikovsky, he proposes a "Polar Configuration"[1] involving the five planets, Jupiter, Saturn, Venus, Mars, Earth, in order, which formerly orbited the Sun as a linear assembly while it rotated about its barycenter and influenced human mythology.[2] Biography[edit] Polar configuration[edit] The planetary "polar configuration" envisioned by Talbott has been subject to criticism, for example: Bibliography[edit] Books[edit] Symbols of an Alien Sky – Official Full Movie. We present the first in the Thunderbolts Project’s series of DVDs outlining David Talbott’s reconstruction of the ancient sky. 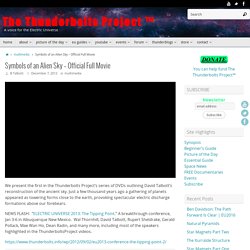 Just a few thousand years ago a gathering of planets appeared as towering forms close to the earth, provoking spectacular electric discharge formations above our forebears. NEWS FLASH: “ELECTRIC UNIVERSE 2013: The Tipping Point.” A breakthrough conference, Jan 3-6 in Albuquerque New Mexico. History (TV channel) History (originally The History Channel from 1995 to 2008) is an American basic cable and satellite television channel that is owned by A+E Networks, a joint venture between the Hearst Corporation and the Disney–ABC Television Group division of The Walt Disney Company. It originally broadcast documentary programs and historical fiction series.

However since 2008, it has mostly broadcast a variety of reality television series and other non-history related content. Additionally, the network is frequently criticized by scientists and skeptics for broadcasting pseudo-documentaries, unsubstantiated and sensational investigative programming, such as Ancient Aliens, UFO Files, Brad Meltzer's Decoded and the Nostradamus Effect.

As of August 2013, approximately 98,226,000 American households (86.01% of households with television) receive History.[1] Home - Coast to Coast AM. Aliens. Norway spiral: A rocket scientist explains the mystery. Some may have thought it was a prelude to a close encounter of the third kind. 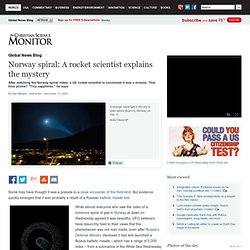 But evidence quickly emerged that it was probably a result of a Russian ballistic missile test. Skip to next paragraph Recent posts Subscribe Today to the Monitor Click Here for your FREE 30 DAYS ofThe Christian Science MonitorWeekly Digital Edition While almost everyone who saw the video of a luminous spiral of gas in Norway at dawn on Wednesday agreed it was beautiful, UFO believers have staunchly held to their views that the phenomenon was not man made, even after Russia's Defense Ministry disclosed it had test launched a Bulava ballistic missile – which has a range of 5,000 miles – from a submarine in the White Sea Wednesday morning.

The Russian explanation makes the most sense to William Dimpfl, a senior research scientist at the Aeorospace Corporation. Dr. "I looked at the video and my first thought was it’s surprising how pretty it is," says Dimpfl. Hollow Earth.