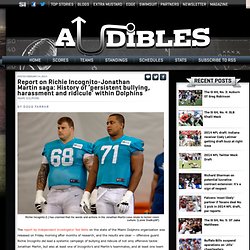 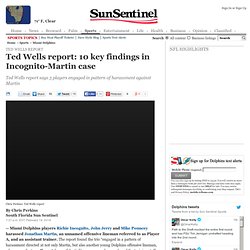 The report found the trio “engaged in a pattern of harassment directed at not only Martin, but also another young Dolphins offensive lineman, whom we refer to as Player A for confidentiality reasons, and a member of the training staff, whom we refer to as the Assistant Trainer.” --Martin admitted that he never told anyone in the Dolphins organization that his teammates wereharassing him. The report said, “We find that Head Coach Joe Philbin was not aware of the mistreatment of Martin, Player A or the Assistant Trainer.” Mmqb.si.

One of the most telling lines in the Ted Wells report on the departure of offensive tackle Jonathan Martin from the Dolphins last season was this: “As all must surely recognize, the NFL is not an ordinary workplace.” 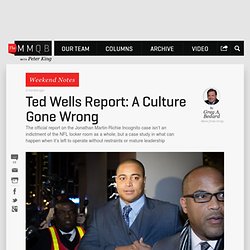 No, it is not. NFL locker rooms and practice fields are vile and vulgar places. Sure, they clean up a little when the media is let in, but that’s only for 45 minutes four days a week during the regular season. Players spend countless more hours together during which just about anything goes. Most of the behavior the media doesn’t see—the foul language, the harassment, the crude jokes—would get normal people fired on the spot. What did we learn? Bullying has lingering effects on children's mental health. Being bullied at school leaves a lasting mark on young victims' bodies and minds years after the bullying ends, a new study shows. 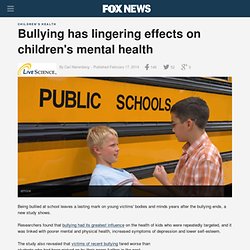 Researchers found that bullying had its greatest influence on the health of kids who were repeatedly targeted, and it was linked with poorer mental and physical health, increased symptoms of depression and lower self-esteem. The study also revealed that victims of recent bullying fared worse than students who had been picked on by their peers further in the past.

"The effects of bullying can snowball over time," said study researcher Laura Bogart, a social psychologist at Boston Children's Hospital. Children who experience continued bullying, such as in more than one grade, had more severe effects, she said. "The results are a strong argument for an immediate, early intervention of bullying," Bogart said. [10 Scientific Tips for Raising Happy Kids] The findings were published online today (Feb. 17) and will appear in the March issue of the journal Pediatrics. 11 Facts About Bullying. 1. 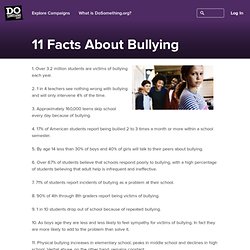 Over 3.2 million students are victims of bullying each year. 2. 1 in 4 teachers see nothing wrong with bullying and will only intervene 4% of the time. 3. Approximately 160,000 teens skip school every day because of bullying. 4. 17% of American students report being bullied 2 to 3 times a month or more within a school semester. 5. 6. How Should Schools Handle Cyberbullying? Prevention at School. Bullying can threaten students’ physical and emotional safety at school and can negatively impact their ability to learn. 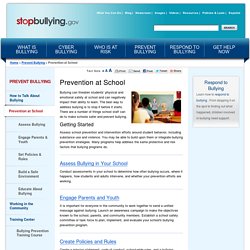 The best way to address bullying is to stop it before it starts. There are a number of things school staff can do to make schools safer and prevent bullying. Getting Started Assess school prevention and intervention efforts around student behavior, including substance use and violence. You may be able to build upon them or integrate bullying prevention strategies. Assess Bullying in Your School Conduct assessments in your school to determine how often bullying occurs, where it happens, how students and adults intervene, and whether your prevention efforts are working. Engage Parents and Youth It is important for everyone in the community to work together to send a unified message against bullying. Create Policies and Rules Create a mission statement, code of conduct, school-wide rules, and a bullying reporting system. Build a Safe Environment. Controversy at Every Turn: The Career of Richie Incognito. Miami Dolphins offensive lineman Richie Incognito is no stranger to the spotlight. 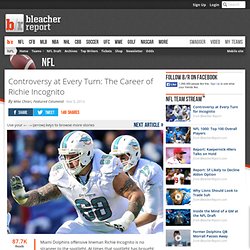 At times that spotlight has brought with it glowing praise for his fine on-field performances, but all too often, as is the case currently, he has found himself in the spotlight for all the wrong reasons. The nine-year NFL veteran out of Nebraska is an imposing force on the field at 6'3" and 319 pounds. He even earned the first Pro Bowl nod of his career last season. Incognito had seemingly rehabilitated his once-tarnished image since joining the Dolphins in 2010, but a troubling situation featuring teammate Jonathan Martin has changed public perception once again. The Accusations Robert Mayer-USA TODAY Sports Per ESPN's Adam Schefter, the Dolphins have suspended Incognito for conduct detrimental to the team in relation to an incident or string of incidents that recently led to Martin's departure from the squad.

Hey, wassup, you half n----- piece of s---. NFL Investigation Concludes Richie Incognito Harassed Martin And Others, Uncovers More Offensive Comments. Richie Incognito Breaks Silence in Twitter Rant Directed at Jonathan Martin. Updates from Monday, Feb. 17 Less than a week after going on his epic Twitter rant, Richie Incognito took to the medium once again, this time to apologize for his actions last week (some language NSFW): I apologize for acting like a big baby the last few days. 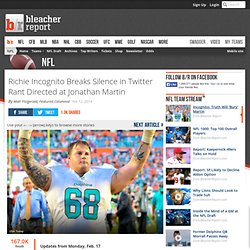 Orlando Sentinel. Richie Incognito Apologizes for Behavior in Return to Twitter. Wilfredo Lee/Associated Press After taking to Twitter last week to rant against his teammate Jonathan Martin and seemingly anyone else who wronged him, Richie Incognito returned on Monday to apologize for his behavior. 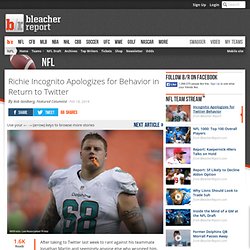 The apology came in an extended message on his account: I apologize for acting like a big baby the last few days. FAMS 240.