Scott Huish is a founding partner and Managing Director at HighStreet Capital. Mr. Huish has been an entrepreneur, founder, and corporate director in a number of companies.

Scott G Huish. Scott G Huish - How to Make Affordable Housing? Housing costs continue to rise year after year and we are heading to a breaking point for many renters and mortgage owners. 2020 will be a year where this gets great political attention at the local and national levels. 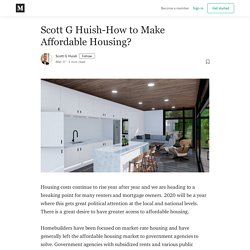 There is a great desire to have greater access to affordable housing. Homebuilders have been focused on market-rate housing and have generally left the affordable housing market to government agencies to solve. Government agencies with subsidized rents and various public funding have attempted to help solve this with a focus on the most severe housing needs that deal with homelessness and mental health services.

But with this public and private partnership, the costs are terrific. Consider that it costs over $750,000 to build affordable housing in San Francisco. Consider the following: Home is No Longer a Place – It’s a State of Mind. Scott G Huish - How Cities Have Changed. Most people historically made their livelihoods with small household farms. 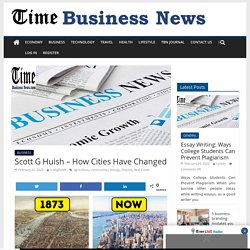 As technology improved, farming became more efficient and fewer people were needed in the fields. This led to the practice of diversification of labor. What was once an occasional trip to the city to buy and sell goods became more frequent as more and more people performed more jobs within the cities. As the diversity of skills increased, so did the need for connection in cities. Older cities, such as those in Europe, have historically had greater urban density as people wanted to live within access of everything and their method of transport was normally on foot or horse. 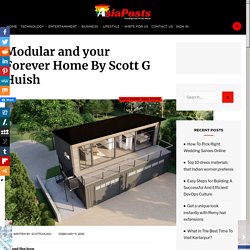 This leads to lower costs and faster construction timelines. But did you know that a modular home can be your forever home? This forever home can be yours whether you choose to remain in one location with changing needs, or whether you choose to move around the world. Staying Put Imagine finding the perfect piece of land for your dream home- whether in the mountains, your ideal suburb, or near the ocean. Scott G Huish. Scott G Huish - Development of Modular Manufacturing. 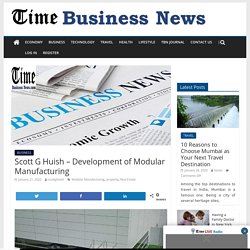 This is needed to solve today’s affordable housing crisis and the lack of productivity in the construction industry. There are three major causes for this crisis within the United States. There exists over 10 million housing unit deficit.Labor shortages are tightening the employee pool.Projects normally end up at least 20 percent over time and as much as 80 percent over construction budget.

The traditional method of organizing construction by trades is terribly outdated and leads to poor productivity. Most things in the world are manufactured. As a result, the US affordable housing crisis has hit nearly every city. Some of the benefits of modular construction are: At least 90 percent of the building is done off site. Scott G Huish - Why Does it Cost More to Build a Living Room than a Car?

Posted by scottghuish on January 20th, 2020 The average cost to build a home addition is ,000. (1) And those costs are only expected to increase with labor shortages and increased material costs. 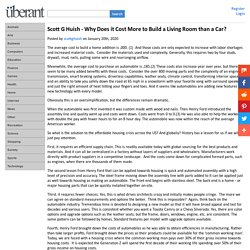 Consider the materials used and complexity. Generally, this requires two by four studs, drywall, mud, nails, pulling some wire and rearranging airflow. Meanwhile, the average cost to purchase an automobile is ,185.(2) These costs also increase year over year, but there seem to be many added benefits with these costs. Consider the over 800 moving parts and the complexity of an engine, transmission, smart braking systems, driverless capabilities, leather seats, climate control, transforming interior spaces, and an ability to take you safely down the road at 65 mph in a snowstorm with your favorite song with surround speakers and just the right amount of heat hitting your fingers and toes. Obviously this is an oversimplification, but the differences remain dramatic. The Modern Mansion, by Scott Huish. Economic, Ecologic, and Psychologic benefits of living in a modern mansion. 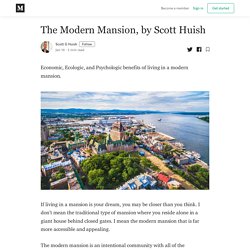 If living in a mansion is your dream, you may be closer than you think. I don’t mean the traditional type of mansion where you reside alone in a giant house behind closed gates. I mean the modern mansion that is far more accessible and appealing. The modern mansion is an intentional community with all of the conveniences and services that anyone might want. But in a more elegant and modern way. Every day people are realizing the benefits of exchanging their traditional mansions where most rooms are vacant most of the time, for a modern mansion, where most rooms and buildings are mixed use and can be utilized by members of the community throughout the day.

How to Start Up in Real Estate Business. A real estate business is one of the most flourishing and financially sound businesses that may help you shape your career to reach new heights. 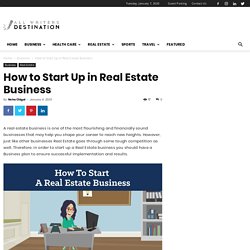 However, just like other businesses Real Estate goes through some tough competition as well. Therefore, in order to start up a Real Estate business you should have a Business plan to ensure successful implementation and results. Real Estate Development Business Plan. Growth and Development Services - Scott G Huish.