Antonyms - Can the protagonist be the antagonist? Mimicking Mowgli: A Visit To 'The Jungle Book' Forest In India. When Disney’s The Jungle Book released in India on April 8, I was searching for Shere Khan at six a.m. and pounding rice husks with a woman from the Gondi tribe, squatting like a baseball catcher in 90 degree heat. 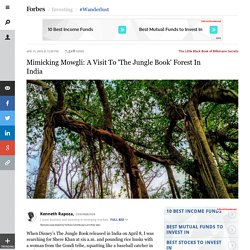 At sundown. I don’t really know how I pulled this trip off, because it all happened so fast. But if my two daughters could see me now, they’d ditch their devices and want to click here on the clay floors of a man-cub villa. Living like Mowgli, even for a little while, would be unforgettable. They’re Disney freaks, so they can appreciate this sort of experience. If only… Surekah, the lady of the house, would show them how to grind lentil beans — and get a forearm workout at the same time. A young “man cub” from the Gondi tribal village in Pench.

“We sleep outside and scare them away,” he tells me through translation and points to these tiny huts outside rice paddy fields. “What about bugs? His suggestion for pest control: cow urine. India’s big on tiger preservation. “Yeah. The location of Mowgli's Jungle. [March 23 2007] Introduction 0n 9th August 1892, after a truncated honeymoon, Rudyard Kipling and his wife Caroline arrived at her family home in Brattleboro,Vermont where they were to live for some four years. 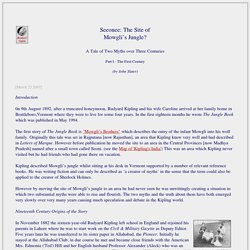 In the first eighteen months he wrote The Jungle Book which was published in May 1994. The first story of The Jungle Book is "Mowgli’s Brothers" which describes the entry of the infant Mowgli into his wolf family. Originally this tale was set in Rajputana [now Rajasthan], an area that Kipling knew very well and had described in Letters of Marque. Kipling described Mowgli’s jungle whilst sitting at his desk in Vermont supported by a number of relevant reference books.

However by moving the site of Mowgli’s jungle to an area he had never seen he was unwittingly creating a situation in which two substantial myths were able to rise and flourish. Nineteenth Century Origins of the Story. The Jungle Book. You think you know The Jungle Book. 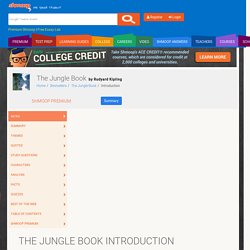 You can hypnotize anyone with your rendition of "Trust in Me. " You march with the best of them. You want to be just like Mowgli and you think have the bear necessities to do it. Bad news: You're wrong. If you went into the jungle singing all those songs, you wouldn't get a warm bear hug—instead you would get eaten alive. Before The Jungle Book was a hit Disney cartoon, it was written by Rudyard Kipling way back in 1894. About that last one: Kipling was a white guy born in India and an advocate of British Imperialism. 95.02.05: Using Film and Literature in the Elementary Classroom: The Jungle Book. Using a combination of film and literature in the classroom This unit was developed around this particular novel and these films because of their exotic location, the fact that the hero of the story is a young boy, and the fact that the villains in the story are fearful and awe-inspiring wild animals. 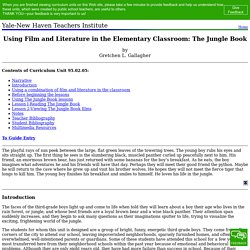 In addition, The Jungle Book has been adapted for the screen in both live-action and animated narrative forms. When Carole Cox conducted a study which posed the question “What films do children like,” she presented upper-elementary aged children with short films, and asked them to rank the films on a scale of one (well-liked) to four (disliked). Interestingly, she found that the children preferred live-action narrative films over all others. In addition, both movie styles have strengths and limitations to explore. Combining the mediums of film and literature to spark interest and creativity, then, should, at the same time, help to improve the academic and social skills of the students. 1. The Jungle Book Summary. Book 1 Mowgli’s Brothers Shere Khan the tiger has hunted a man cub, but the wolves have adopted him as their own and named him Mowgli (the frog). 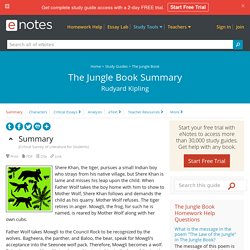 As Mowgli grows up, he is guided by Baloo the bear and Bagheera the panther, who supported Mowgli’s wolf parents in their desire to raise Mowgli. Bagheera, who had been raised by man, teaches Mowgli how to retain his humanity and warns him that some day he must go back to the village. When Akela misses a kill, Shere Khan and the young wolves he has flattered demand that Mowgli be given to him. Kaa’s Hunting The Bander-log (monkey tribe) kidnap Mowgli, carry him far into the jungle, and hold him prisoner. Tiger! Google Play.