What is graphic design? Graphic design, also known as communication design, is the art and practice of planning and projecting ideas and experiences with visual and textual content. 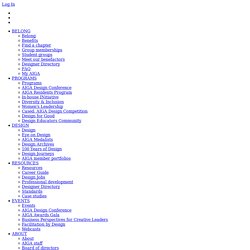 The form of the communication can be physical or virtual, and may include images, words, or graphic forms. The experience can take place in an instant or over a long period of time. The work can happen at any scale, from the design of a single postage stamp to a national postal signage system, or from a company’s digital avatar to the sprawling and interlinked digital and physical content of an international newspaper. It can also be for any purpose, whether commercial, educational, cultural, or political. Design that’s meant to be experienced in an instant is the easiest to recognize and has been around the longest. The design of books and magazines also has a long history. Many designers also produce systems that are meant to be experienced over time, but aren’t confined to the making of objects. VIEW: What is Design and why it matters. What is Design and why it matters By Mat Hunter, Chief Design Officer, Design Council There are countless definitions of design, as you might expect of a creative endeavour. 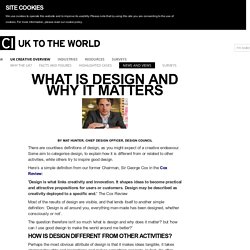 Some aim to categorise design, to explain how it is different from or related to other activities, while others try to inspire good design. Here’s a simple definition from our former Chairman, Sir George Cox in the Cox Review: 'Design is what links creativity and innovation. Definition of design. 50 Most Influential Designers in America. Ed Tufte A godfather of information design and literally wrote the discipline's bibles. 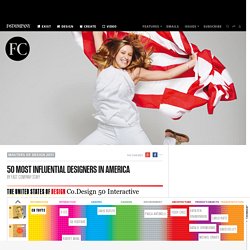 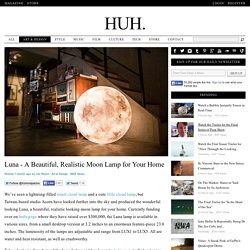 Currently funding over on Indiegogo where they have raised over $300,000, the Luna lamp is available in various sizes, from a small desktop version at 3.2 inches to an enormous feature-piece 23.6 inches. The luminosity of the lamps are adjustable and range from LUX1 to LUX5. Future Artefacts 2015. Future Artefacts will hold it’s inaugural event this October in East London, bringing together a multitude of the world’s most progressive art publishers, record labels, fashion brands and tech companies, with the focus to celebrate their products as media artefacts of the future. 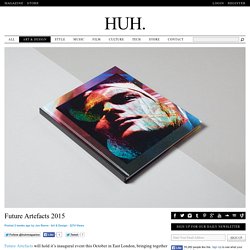 The three-day fair will also host drop-in art and music workshops, talks in conjunction with their media partner Dazed, food by Sub Cult and a series club nights held in various venues around East London. Founders Ben Freeman and Deano Jo, owners of Ditto Press and Real Gold respectively, gave the below statement about the event via press release: "We established Future Artefacts to champion the producers of the most beautiful physical manifestations of media today. We’d like to encourage a future where anything that can be digital will be and where the only things that are produced are those that unite visionary content with the world’s best craftsmanship and production techniques.

They delivered a set of pretty psychedelic and fairly horrifying GIFs which the MTV legal team deemed to much to go on air. FLOW - A Beautiful Plywood Desk Designed by LAZERIAN. Responding to a commission to create an "inspiring centrepiece" for a new £10m arts and media college campus, UK creative practice LAZERIAN made FLOW - a desk created from 300 plywood components. 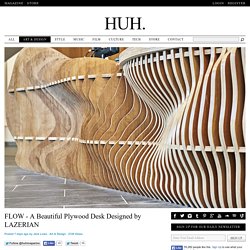 Situated right in the heart of the campus, the sculptural form provides a welcome to Clarendon Sixth Form College in Manchester and offers a "physical statement of the college’s educational mission". LAZERIAN's designer Liam Hopkins created the piece by drawing the line of movement from six dancers, tracing their performance to reveal visual data which could then be "clad in a virtual skin". 50 Skulls Project for Day of the Dead and el Jimador. This year, 100% agave Tequila brand el Jimador have teamed up with UK artist Chris Bourke to create a series of distinctive handcrafted artworks for Día de los Muertos, the Mexican festival that celebrates the life and spirit of those who have passed over to the other side. 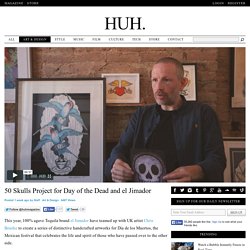 Building on last year’s el Jimador Day of the Dead Skull Art Project, which saw eight notable street artists and illustrators (including Pure Evil, Cosmic Nuggets and Mr Penfold) create one stunning piece of skull art each, Chris has produced a series of 50 one-off and intricate skull artworks. The uniquely striking designs bring to life the essence of Day of the Dead and serve as a natural sequel to his recent Hearts project. Below is a preview of the finished pieces as well as some behind-the-scenes shots to show how the project came to life. el Jimador will be celebrating in true Mexican fashion at Shoreditch bar Callooh Callay, throwing an exclusive party over Day of the Dead weekend.