Gove's 'progressive betrayal' seems to be a private school phenomenon. The misconceptions of people who have never stepped into a state school are often quite alarming. 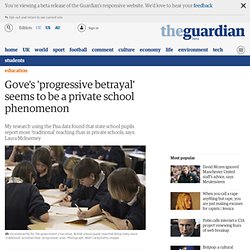 "Were lots of people at your school pregnant? " I remember once being asked at university. "I expect it was very difficult to learn over the noise," said another, as if people who don't pay for schooling inevitably have foghorns for voices. The points were ridiculous and easily shrugged off. John Dunford Consulting. The leaning tower of PISA? According to the latest PISA study Britain's teenagers have dropped out of the top 20 in reading, maths and science. 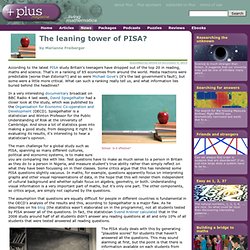 That's in a ranking of 65 economies from around the world. Media reactions were predictable (worse than Estonia?!) And so were Michael Gove's (it's the last government's fault), but some were a little more critical. What can such a ranking really tell us, and what information lies buried behind the headlines? School: Is it effective? In a very interesting documentary broadcast on BBC Radio 4 last week, David Spiegelhalter had a closer look at the study, which was published by the Organisation for Economic Co-operation and Development (OECD). The main challenge for a global study such as PISA, spanning so many different cultures, political and economic systems, is to make sure you are comparing like with like. David Spiegelhalter. Opinion: The costs of Shanghai's education success story. Students attend class at the Jing'an Education College Affiliated School in Shanghai. 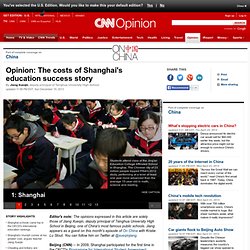 The Chinese city of 23 million people topped PISA's 2012 study, performing at a level at least one year more advanced than the average 15-year-old in math, science and reading. Singapore ranked second in math, and third in reading and science. John Dunford Consulting. England must better prepare pupils for Pisa tests to improve its ranking, heads' leader says. England should start preparing pupils for the Programme for International Student Assessment (Pisa) tests if it wants to climb the international education rankings, a schools’ leader representing hundreds of secondaries has claimed. 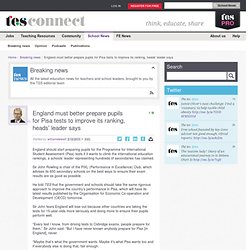 Sir John Rowling is chair of the PiXL (Performance in Excellence) Club, which advises its 650 secondary schools on the best ways to ensure their exam results are as good as possible. He told TES that the government and schools should take the same rigorous approach to improve the country’s performance in Pisa, which will have its latest results published by the Organisation for Economic Co-operation and Development (OECD) tomorrow. Sir John fears England will lose out because other countries are taking the tests for 15-year-olds more seriously and doing more to ensure their pupils perform well. “Every test I know, from driving tests to Oxbridge exams, people prepare for them,” Sir John said.

PISA rankings are a shot in the arm for education reformers. Like measuring water by the handful, calculating the success of the education system at a time of rampant grade inflation is an impossible task. 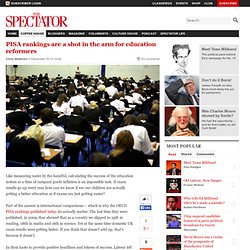 If exam results go up every year how can we know if are our children are actually getting a better education or if exams are just getting easier? Part of the answer is international comparisons – which is why the OECD PISA rankings published today do actually matter. The last time they were published, in 2009, they showed that as a country we slipped to 25th in reading, 28th in maths and 16th in science. Yet at the same time domestic UK exam results were getting better. If you think that doesn’t add up, that’s because it doesn’t.

In their haste to provide positive headlines and tokens of success, Labour left behind the one thing that actually mattered – giving children a decent education. Finland scores well in "adult PISA" rankings. Finland has consistently scored highly in the international PISA rankings designed to test school pupils’ skills, prompting considerable interest in the country’s education system. 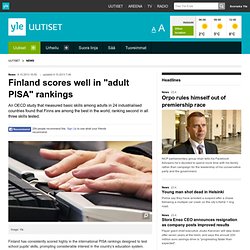 Those good results have now been replicated in a report touted as the 'adult PISA'. The OECD organised its first study of adult skills this year, looking at the abilities of 16-65-year-olds in 24 countries for the PIAAC report. It found Finns’ skills to be world class. In literacy, Finns averaged 288 points and finished second only to Japan. Pisa rankings are 'utterly wrong' - news. Comment:3 average rating | Comments (5)Last Updated:14 September, 2013Section:news Experts say global league tables beloved by politicians are ‘useless’ The world’s most influential education league tables are “useless”, produce “meaningless” rankings and are compiled using techniques that are “utterly wrong”, according to damning new academic criticism. 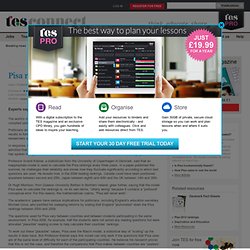 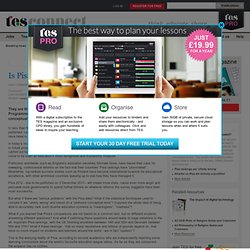 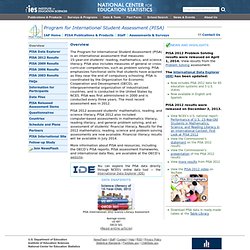 PISA also includes measures of general or cross-curricular competencies, such as problem solving. PISA emphasizes functional skills that students have acquired as they near the end of compulsory schooling. PISA is coordinated by the Organization for Economic Cooperation and Development (OECD), an intergovernmental organization of industrialized countries, and is conducted in the United States by NCES. 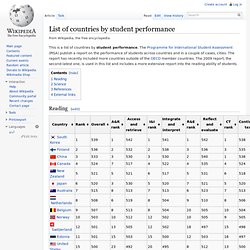 Why is a country the size of New Mexico beating the U.S. in academic performance? Tuesday is “PISA Day,” that is, the day that the 2012 results of reading, math and science tests will be released from the Program for International Student Assessment, or PISA, which tests 15 year olds every three years in more than 65 countries and education systems. The United States can be expected to do pretty much as it does every time the scores come out — pretty average.

One country that has done exceedingly well over recent years is Finland, whose education model has been cited repeatedly in recent years as an educational model. But what does that mean? Here’s a piece on the subject by Dennis Van Roekel, president of the National Education Association, and Olli Luukkainen, president of Finland’s Opetusalan Ammattijärjestö, or the Trade Union of Education. By Dennis Van Roekel and Olli Luukkainen Workforce Quality—U.S. government leaders and politicians often extol the value of teachers while at the same time they berate the unions that represent them. Next week's PISA results: If we want better results, we have... If you want something to ponder after the pie this holiday weekend, here is a good piece by Dennis Van Roekel, president of the National Education Association. He wrotes this piece in anticipation of today's release of the Program for International Student Assessment (PISA) rankings.

By Dennis Van Roekel When I taught high school math, a student who received a D in my class asked me what grade I thought he would make in the next semester. With a slight smile, I responded, “If you keep doing exactly what you did first semester, I believe you’ll make a D.” On Tuesday, the triennial Program for International Student Assessment rankings will be released, comparing the competencies of high school students from 64 countries. The reason things probably won’t change much is that we haven’t addressed the main cause of our mediocre PISA performance: poverty and its effects on students. Sixty years ago this month, Thurgood Marshall and other attorneys argued before the U.S.

How public opinion about new PISA test scores is being manipulated. (Bloomberg) This Tuesday, new reading, math and science results will be released from the Program for International Student Assessment, or PISA, given every three years to 15-year-old students in more than 65 countries and education systems by the Organization for Economic Cooperation and Development. The results are always big news — and the usual average U.S. scores are always cause for great cries of concern about what they mean for the future of the country’s economic health and national security. They don’t mean much, if anything, but that doesn’t stop people from saying they do.

The following hard-hitting post on the release of the PISA scores was written by Richard Rothstein, research associate at the Economic Policy Institute, a non-profit organization created to broaden the discussion about economic policy to include the interests of low- and middle-income workers, and Martin Carnoy, education professor at Stanford University’s Graduate School of Education. Typically, the U.S.

Don't let dubious Pisa league tables dictate how we educate our children. The triennial results from the Programme for International Assessment (Pisa), due on Tuesday but trailed in the Sunday press, have become education's equivalent of the football World Cup. And the performance of the British teams is just as mediocre, giving more leverage to politicians determined to get a few easy cheers from slagging off teachers. In the 2009 tests the UK was around average, with England, Scotland and Northern Ireland roughly on a par, and Wales doing even worse.

The English and Scots did better than Peruvians, as you'd expect, but they were not up there with the Chinese, Singaporeans, Koreans, Japanese or Estonians and Poles. Little change this time, apparently. Michael Gove blames Labour for international league table performance. Michael Gove has pointed to "children educated almost entirely under Labour" to explain England's lacklustre performance in international education league tables to be published later this week.