Eastern Connecticut State University. View a transcript of this video. 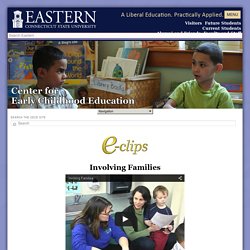 Please help us make better videos! Tell us what you like about this video and how you plan to use it. Description Parents and other close families members are children’s first teachers. In e-clip #3, Jamie Klein, Director of Eastern’s Child and Family Development Resource Center, discusses the importance of building strong, trusting relationships with families. When early childhood administrators and teachers provide a variety of opportunities for families to become involved in classrooms and in programs, parents gain an understanding of what their children are learning, and they have the ability to extend the learning at home. LEGO Foundation Ever younger academic education is not quality early learning. In the UK, children start school in the September after their 5th birthday, resulting in an age gap of a year between the oldest and youngest children in the same class. 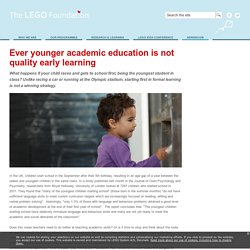 In a study published last month in the Journal of Child Psychology and Psychiatry, researchers from Royal Holloway, University of London looked at 7267 children who started school in 2011. They found that "many of the youngest children starting school" (those born in the summer months) "do not have sufficient language skills to meet current curriculum targets which are increasingly focused on reading, writing and verbal problem solving". Create Your Own Case Toolkit: A Professional Development Resource to Promote Family Engagement / News & Announcements / HFRP News.

Everyone loves a good story. Stories help people form relationships and make sense of the world around them. Business, medicine, and education have long used stories---or cases---as teaching and professional development tools. In the family engagement field, reading cases challenges those who work with families to consider multiple perspectives; think critically about real-world issues; communicate effectively; and identify family strengths. Studies Illustrate Plight of Introverted Students. The Ultimate Education Reform: Messy Learning & Problem Solving. Have you ever gone to the doctor with a rather vague problem? 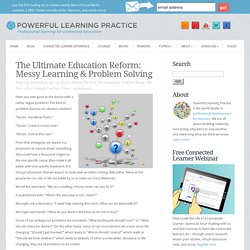 The kind of problem that has no obvious solution? Vygotsky. The Ultimate Education Reform: Messy Learning & Problem Solving. John Dewey on the True Purpose of Education and How to Harness the Power of Our Natural Curiosity. By Maria Popova “While it is not the business of education … to teach every possible item of information, it is its business to cultivate deep-seated and effective habits of discriminating tested beliefs from mere assertions, guesses, and opinions.” 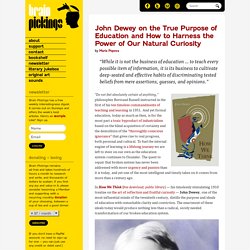 “Do not feel absolutely certain of anything,” philosopher Bertrand Russell instructed in the first of his ten timeless commandments of teaching and learning in 1951. And yet formal education, today as much as then, is for the most part a toxic byproduct of industrialism based on the blind acquisition of certainty and the demolition of the “thoroughly conscious ignorance” that gives rise to real progress, both personal and cultural. To fuel the internal engine of learning is a lifelong journey we are left to steer on our own as the education system continues to flounder. 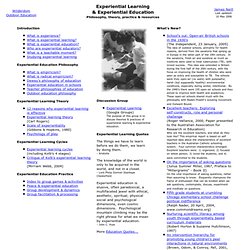 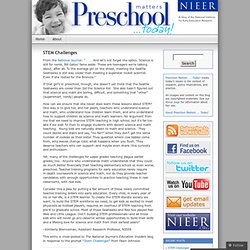 And let’s not forget the optics. Science is still for nerds, Bill Gates’ fame aside. DAP Position Statement. Edcyclopedia Archive - Ed Central. Expanding Access to Quality Pre-K is Sound Public Policy. In 2013, preschool education received more attention in the media and public policy circles than it has for some time, in part because of a series of high-profile proposals to expand access to quality pre-K. 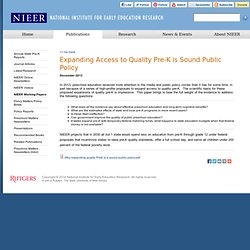 The scientific basis for these proposed expansions of quality pre-K is impressive. This paper brings to bear the full weight of the evidence to address the following questions: What does all the evidence say about effective preschool education and long-term cognitive benefits? Email - Finding Bias in Books: Follow Up Resources for Early Childhood Educators. Schlembach, Sue (schlemse) - Outlook Web App. Bdl.uoregon.edu/Publications/Neville PNAS 2013.pdf.

5 Things Every Parent Needs to Know About The Common Core. If you have a child in school today, chances are you’ve heard something about the Common Core standards. 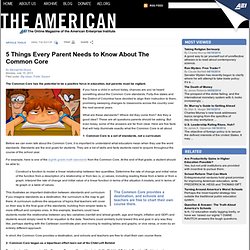 Forty-five states and the District of Columbia have decided to align their instruction to them, promising sweeping changes to classrooms across the country over the next several years. Recaps and Highlights from Eight PreK-3rd Webinars. Today the PreK-3rd Grade National Work group, of which New America is a part, released a four-page brief with webinar highlights. 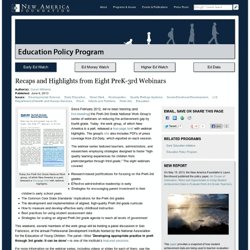 Since February 2012, we’ve been tracking (and live-tweeting ) the PreK-3rd Grade National Work Group’s series of webinars on reducing the achievement gap by fourth grade. Today the work group, of which New America is a part, released a four-page brief with webinar highlights. The group's site also includes PDFs of press coverage from Ed Daily , which reported on each session. The webinar series featured teachers, administrators, and researchers employing strategies designed to foster “high-quality learning experiences for children from prekindergarten through third grade.”

The eight webinars covered: Child Well-Being Index Infographic 2012. Common Core State Standards. Welcome to the Share My Lesson Information Center for the Common Core State Standards. As well as a wealth of facts and statistics about the standards, you'll also be able to find aligned curricula and lesson plans, the latest news on the Common Core and relevant videos and links. In addition, you can access expert advice and opinions in our Common Core Forum, where you can ask or answer questions on the standards.

The Common Core State Standards will require big transitions and changes to the professional lives of educators and we want to help. The effects of early life adversity on brain and behavioral development. Doing What Doesn't Come Naturally: Self-regulation. Retention/redshirting. Early Childhood Education In Mississippi: 'Building Blocks' A Solution To Lost Opportunities? My Word: Make school readiness tests worthwhile. October 3, 2012|By Judith Levin The suggestion that Florida's Voluntary Pre-Kindergarten Assessment test is a predictor of academic success, as expressed in an Orlando Sentinel article last month, is dismaying.

How Children Succeed book excerpt: What the most boring test in the world tells us about motivation and IQ. Photograph by Anders Lagerås/Wikimedia Commons. The following article is adapted from Paul Tough's How Children Succeed: Grit, Curiosity, and the Hidden Power of Character, out now from Houghton Mifflin Harcourt.

Angela Duckworth, a psychologist at the University of Pennsylvania, has made it her life’s work to analyze which children succeed and why. She says she finds it useful to divide the mechanics of achievement into two separate dimensions: motivation and volition. Each one, she says, is necessary to achieve long-term goals, but neither is sufficient alone. Most of us are familiar with the experience of possessing motivation but lacking volition: You can be extremely motivated to lose weight, for example, but unless you have the volition—the willpower, the self-control—to put down the cherry Danish and pick up the free weights, you’re not going to succeed.

Click here to download PDF This issue brief, produced by the New America Foundation's Early Education Initiative, addresses the dearth of reliable, complete, and comparable data on pre-K and kindergarten in school districts and local communities. The Early Education Initiative, in partnership with the New America Foundation's Federal Education Budget Project (FEBP), expanded the FEBP database to include data on publicly-funded pre-K at the state and school district levels. Gabriel Sanchez Zinny: For Early Childhood Development, the U.S. Should Look South. Why Are Finland's Schools Successful? When the First Day of School is in Pre-k, It Can Pay Dividends through High School and Beyond. September 5th, 2012 by Paul Nyhan. SUNY Receives $2.95 Million NSF Grant to Expand Education Pipeline with STEM Mentoring Across New York. Why Preschool Isn't Enough - Lisa Guernsey and Laura Bornfreund. As President Obama knows, early childhood education is a must.

But without proper K-12 follow-up, its benefits could simply fade away. President Obama visits a pre-K classroom on February 14. Why America Never Had Universal Child Care - The New Republic. The Hell of American Day Care - The New Republic. Before 2014, catch up on the best of 2013. - Education Experts. I agree that a low-quality pre-K program for all four-year-olds won’t do much to help children learn. States should not sacrifice quality for more access. Pre-K teachers learn how to work with non-English speakers - The New Britain Herald (newbritainherald.com) NEW BRITAIN — For six hours, pre-kindergarten teacher Nicole Healy learned first-hand how to better interact with children who are learning English as a second language. Ed Dept’s District-Level Competition Keeps Door Open for PreK-3rd Reforms.